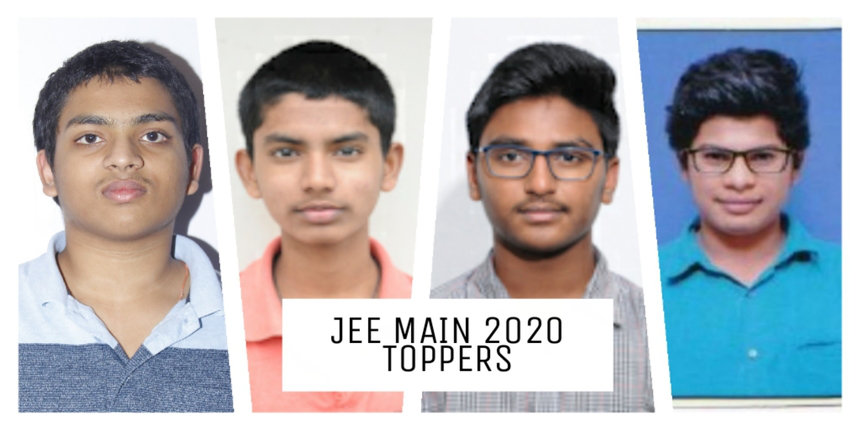 NTA has released the result of JEE Main 2020 for the January session on the official website. This year, 9 students have scored 100 percentile in JEE Main result. Candidates can find the highlights of JEE Main 2020 toppers below.

JEE Main Topper Chagari Koushal Kumar Reddy - Chagari Kaushal is the Telangana state topper in JEE Main 2020 January session. He is a student of Sri Chaitanya, a KVPY scholar and has been selected for the Indian National Olympiads. In an interview with Careers360, he says, " I found the exam a little tougher than what I was expecting, but overall it was moderate in difficulty levels. The questions were evenly distributed from all subjects and all the subjects were moderately difficult". He credits his parents and teachers for his success.

JEE Main 2020 Topper Nishant Agarwal: He has topped from Delhi NCT with 100 NTA score. He is a student from the New Sainik Public School in Dwarka. As reported by Hindustan Times, Nishant said "My goal was to score full marks. I have been highly motivated by my peer group at my coaching institute. They have been an inspiration at being the best on whatever we do”.

JEE Main Topper 2020 Landa Jitendra: He emerged as the Andhra Pradesh state topper in JEE Main 2020 January. He is also among 9 students with 100 percentile score.

JEE Main 2020 Topper Rongala Arun Siddardha: He is a state topper fro Telangana. He is also one of the 9 candidates who scored 100 NTA score.

JEE Main Topper 2020 Akhil Jain: He has topped from Rajasthan. He has secured a perfect 100 NTA score in the exam. As quoted in Indian Express, 18-year old Akhil believes in taking one step at a time. Rather than celebrating his success, he has decided to focus on JEE Advanced and then, on the basis of the result, he will plan his next move. Jain has qualified in his first attempt and unlike many aspirants, he has no plans to re-appear for April JEE Main.

JEE Main 2020 Topper Parth Dwivedi: Parth is from Bharatpur, Rajasthan. As reported by TimesNowNews, Parth’s strategy for the exam was to give equal time to all three subjects, that is Physics, Chemistry and Mathematics. His major focus was on strengthening his weak topics and he took help from his teachers for this. He said that "I never missed any of his classes and used to study for three to four hours every day." Parth’s father Vineet Dwivedi is an officer in Railways while mother Niti Dwivedi is Additional SP in Lucknow. Along with studies, Parth is also interested in guitar and movies. He is hoping to get into CS branch in IIT Bombay and work for the country after that.

JEE Main 2020 Topper Divyanshu Agarwal: Hisar's Divyanshu Agarwal has topped from Haryana. He has a perfect 100 NTA score. He has 100 percentile score in Maths and Physics while 99.99 score in Chemistry. Divyanshu's Father Adarsh Agarwal is a famous Radiplogist and his mother is a Doctor. As per Divyanshu, he used to study according to his choice, he never forced studies on himself and never took any stress. He used to do meditation and play badmintion to reduce stress. Now, he is focussing on JEE Advanced exam.

JEE Main 2020 Topper Akarsh Jain: He is a state topper from Madhya Pradesh. Talking to Free Press Akarsh said, “It was my first attempt and I am still surprised. I worked really hard and was prepared for the examination. I studied for 9 hours daily on an average. Becoming the state topper is a true surprise. My father (Tarun Jain) is a businessman and mother (Shraddha Jain) is a teacher. So I will be the first one to become an engineer if everything goes well." He further added that he want to do engineering in Computer Science from IIT Bombay.

JEE Main 2020 Topper Ujjwal Mehta: 17 year old boy from Jalandhar is the state topper from Punjab. Talking to Hindustan Times, he said that “I attempted this exam with sincerity and did not lose confidence even for a second while preparing for it. I’ve been staying in a hostel here for the past three years,”. He further added “I’m not internet savvy and stay away from social media. I avoid using the smart phone to concentrate on my studies. I study for at least eight hours a day”.

JEE Main 2020 Topper Srijay Singh Gusain- Lucknow boy Srijay scored 99.89 percentile score in the exam. He said that "I was little amazed when I saw my result but it was very satisfying." Srijay is a student of Marry Guardians Convent School in Lucknow and he wishes to do B.Tech in Computer Science or Electrical Engineering from IIT Delhi. When asked about his preparations, he said that the funda for JEE Main is to study with NCERT books. He used to study 5 hours daily. He also added that he will reappear in the April Session and try to get 100 percentile score.

The list of JEE Main toppers of previous years can be checked from the following tables.

JEE Main 2019 Toppers - January Session
The JEE Main 2019 topper list carries 4 candidates from Telangana, 3 from Maharashtra, 2 from Uttar Pradesh, and Rajasthan and 1 each from Madhya Pradesh, Andhra Pradesh, Karnataka, Punjab. However, the sad part is there is no girl among the toppers. We, at Careers360, congratulate each one of the JEE Main 2019 toppers and wish them all the luck for their upcoming days and bright future. Candidates who have received 100 NTA Score in January 2019 examination in Paper-I (B.E. /B. Tech.)

Question: When was the JEE Main 2020 result declared for Paper 2?

The authorities declared the JEE Main result paper 2 for the January session on January 23.

Question: How many students secured 100 percentile in JEE Main January 2020 for paper 1?

As per the notification, there are 9 JEE Main 2020 toppers for Paper 1 who scored 100 percentile.

Question: How many candidates appeared for JEE Main 2020 January paper 1?

Question: What are the steps to check JEE Main 2020 result?

To check the result, candidates have to login to the result portal using JEE Main 2020 application number and date of birth.

I got 97.29 percentile in JEE MAINS, I belongs to OBC, which campus and which branch could I get?

You have secured 97.2 percentile. Based on this yout CRL rank would be 29800 approximately.

You are eligible for getting admission in many colleges. Based on your reservation you would be getting top one too. To see the names of colleges and the branch you are getting please click below to use college predictor tool:

can I get 90/100 in chemistry in jee mains if I do only ncert and previous year question paper?

See this is very much harder to study only NCERT and  previous year question papers and get 90/100 in Chemistry in JEE Mains Exam. I am not saying it is impossible, if you study and memorize each and every page of NCERT and understand every concept well and practice out last 10 years question papers, then it might be possible.

Else you will have to go through a good book other than NCERT for your JEE Mains preparation.

Is government in the favour or zero year or neet jee postponement?

The only thing that government is concerned right now is about health and safety of the students.
Government is helpless, because conducting the JEE and NEET means risking health of more than 20 lakhs students and looking at the current situation when Covid-19 cases are setting record everyday, its highly likely that the exams will get postponed.
In case if any vaccine arrives or the number of cases gets minimized then the exam might take place as per schedule but at present nothing can be said for sure.You cannot control what will happen in future so you should focus on what you can do now and that is preparations for your exam.

can I get 90/100 in maths in jee mains if I do rd Sharma n previous years questions??

Hello,
Yes,it is possible just that you need to remember the concepts used in the questions,and practice as many questions as you can since Jee mains examination is close.
Since you are using only RD Sharma you should practice it thoroughly,and your aim will be easily reached.
Best of luck;
Read More
Answer

Will JEE Mains sept. be postponed?

Hello.
the chances are less for the cancellation of the September JEE mains exam tentative dates has already been prepared for all colleges reopening so if these may open then exam will definitely be conducted and some of the exams has already been conducted so there might be less chances for the cancellation but it depends upon the condition of the global crisis, as the unlock process has already been started in the entire India so the dates given for the JEE mains exam are fixed for now and rest decision will be taken by the NTA authorities for that you should be updated with the official website.
BEST OF LUCK.
Read More
Answer