Is it better to drop a year to prepare for JEE Main rather than taking admission in other colleges?

Now, as JEE Main 2017 result have been declared, the scores/marks range of the candidates will determine the admission opportunities for them. Based on their JEE Main 2017 score and the cut off of JEE Main 2017, admissions will be offered to the candidates across NITs, IIITs and GFTIs. However, the final deciding factors for many admission seekers would be the B.Tech branch and institute they get. At this juncture the students face a dilemma – whether to take admission in the branch and the institute being offered to them or to leave the seat being offered, take a drop and prepare for next year to better their score and admission opportunities. Careers360 has done a closer analysis of the official data of JEE Main from previous years and brought forth some facts about what is a much better option – Is it better to drop a year to prepare for JEE Main rather than taking admission in other colleges? Read through. 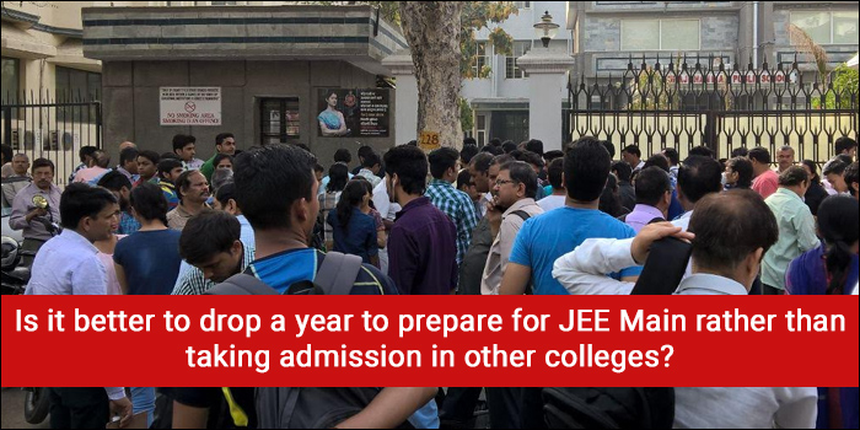 Should you take admission in the first attempt?

This is a big dilemma for many students.  This is generally suggested as a good option and the reasons put forth for this is that you need not waste one year and put your career back by one year. There is no guarantee that you may score exceptionally well hence it is better to take the admissions offered. Time is money and since studying at home is an option preferred by very few, another year of coaching will cost. This can be used towards the college fees for the first year of engineering.

Should you take a drop and attempt JEE Main next year?

As you have to prepare for your board exams and JEE Main simultaneously, it may happen that you are not able to dedicate your entire energy and focus on preparation towards JEE Main with pressure mounting on due to the nearing board exams. You may also end up complaining or begrudging about your JEE Main performance (which might not be at par with your expectations) or with the thought of not getting the desired college or B.Tech branch. If that is the case, you may consider the alternate option of a year’s drop and preparing for the next year’s JEE Main in the hope of a better performance and improved marks. It is commonly felt that if one had a bit more time for the JEE Main preparation, it would have resulted in a better performance.  Taking a break for a year sounds good as it means 12 months of extra time for preparation and a second chance at IIT or NIT admissions. Since one whole year of dedicated study exclusively devoted to JEE Main sounds very promising of a very good JEE Main score, you may think of this as a good option.

So is it better to drop a year to prepare for JEE Main rather than taking admission in other colleges?

Careers360 analysed JEE Main marks of 7,01,297 freshers, 1,67,352 (1-year droppers) and 25,882 (2-year droppers) from the past years and figured out the outcome. The data trend reveals that 47% General category candidates out of the total 7,01,297 freshers dropped the idea of admission for better admission opportunities next year. However, even after taking a year’s drop, nothing significant changed.

The table below reflects trends of marks secured by JEE Main takers from different categories.

Just a little improvement after a year’s drop:

Though the average marks of 77 after a year’s drop are better than 60 secured as a fresher, however when it comes to getting a seat and branch, these little better marks don’t guarantee better seat or institute. Neither it gives you that cut off marks for taking JEE Advanced (the entry gate for an IIT seat).

Similarly, OBC-NCL category students from 7,01,297 freshers scored 49 marks on an average, their JEE Main marks registered a jump of only 17 points on average after taking a year’s drop.

Thus, the JEE Main data from the previous years reflect that if you are planning to drop a year, you may score better in JEE Main, but there will not be much difference in the B.Tech branches and institutes after a year as compared to what you are getting as a fresher. It’s therefore not advisable to suggest a year’s drop in the hope for a better seat and branch.

Worst Case: A 2-year drop for JEE Main - not a good idea

If you are planning to drop in the second year of attempt as well, then better if you first go through JEE Main performance trends from the data of past years. The data reveals though 2-year droppers perform marginally better as compared to a fresher or the candidate appearing in JEE Main for the first time, but the average performance of the candidates with a 2-year drop for JEE Main registered a dip in average marks.

The table below carries JEE Main data from the previous years which reflects the total number of students taking a drop as freshers, 1 year-drop and 2-years drop from different state boards of India.

States and numbers of droppers from state boards in JEE Main:

What after JEE Main Result?

JEE Main cut off analysis: Steep decline over the years

13 hours ago
Read More
View All News and Articles

what are the steps for filling up jee application form ?

The below link shows you exactly step by step process to fill the jeemain application form: https://engineering.careers360.com/articles/how-to-fill-jee-main-application-form

what documents are required for jee form registration ?

below are the list of documents you require while jeemain registration/application:

for more information about the exam,applicatiion and other details you can refer to: https://engineering.careers360.com/exams/jee-main

How can I get admission in punjab engineering college, Chandigarh. What was jee main cut off for general category outside punjab in last three years

Admission into Punjab Engineering College(PEC) is through JEE Mains score.

Since you did not mention any category, I will assume general category nor did you mention any branch so I will give you an average rank to get an admission into PEC, which is 25,500 approx. as per 2019 stats.

Your question is unclear but I will try to answer as much as I can.

So, a bio student can give JEE Mains only when the student has Maths as an additional subject and appears in its board examination and secures good marks (such that total percentage of PCM is higher than or equal to 75%(GEN) or 65%(SC/ST))

Yes UPTU is cancelled now the colleges that previously took admission through UPTU, will be considering JEE Mains score now.

can i still apply for jee mains exam ?

Yes you can still apply for the JEE Main exam since the last date to fill  JEE Main registration has been extended by National Testing Agency (NTA) till January 23, 2021. The application form of JEE Main 2021 is available online on the official website - jeemain.nta.nic.in.

Do not delay any further in filling up the form as the last date for registration is nearing and prepare well for the examinations.