VIT University has announced the result of VITEEE 2018. The entrance examination was conducted from April 4 to 16 in 124 selected cities across India. Foreign cities such as Dubai, Kuwait, Muscat and Qatar also held the examination. Among the registered 2,12,2000 candidates, many received good news and qualified with flying colours during the result announcement. However, some of these candidates outshone others and managed to grab the top ranks. Kalash Gupta of Delhi has secured the first rank in the examination followed by Sarikonda Ananda Ramarao. In this article of VITEEE 2018 – Know Your Toppers, Careers360 has compiled the list of the top 10 candidates in the higher ranks. With details about their ranks and scores as well as interview links, more information about the VITEEE toppers can be found. Read the full article on VITEEE 2018 – Know Your Toppers to know more. 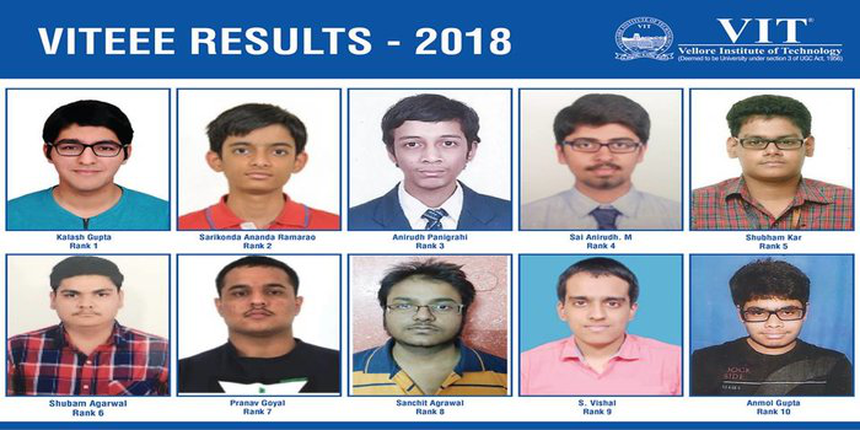 All about VITEEE Toppers 2018

Kalash Gupta from Delhi has secured first rank among the many candidates who had participated in the entrance examination. Sarikonda Ananda Ramarao has secured the second rank and Anirudh Panigrahi has grabbed the third rank. For VITEEE 2018, the toppers belong from various states of the country. Careers360 has listed out the top students who managed to grab the high ranks in the national level engineering examination for VIT admissions.

VIT University has also announced that qualified candidates under the GV School Development Programme and State Board toppers will be given 100 percent fee waiver for all four years.

Along with the toppers, we at Careers360, wish all of the qualified VITEEE 2018 candidates a heartiest congratulations. All the best for the counselling procedure!

Hello student fees details for group B are as mentioned below -

For more details refer to the link mentioned below - https://www.google.com/amp/s/engineering.careers360.com/articles/viteee-fee-structure/amp