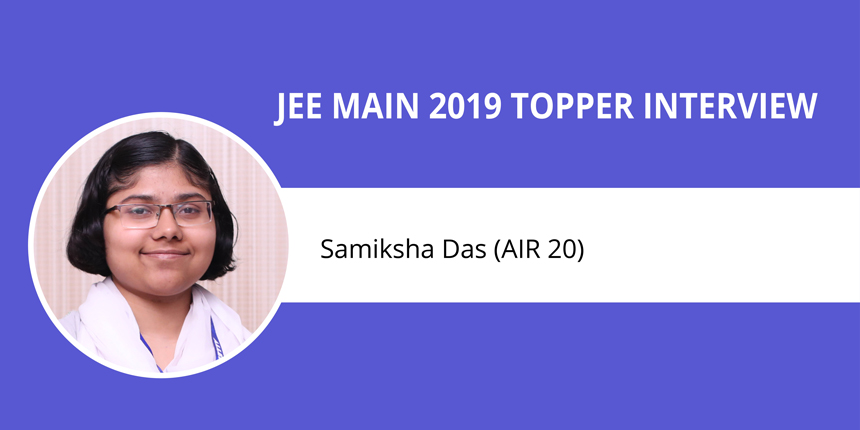 JEE Main 2019 Topper Interview: Samiksha Das (AIR 20)- The National Testing Agency (NTA) declared JEE Main result 2019 on April 29 and brought about much glee among toppers. The result sparked more joy to Samiksha Das from Rajasthan who was expecting a score of 350 but ended up scoring 355. A hardcore Marvel fan, Samiksha curbed her wish to watch Avengers: Endgame to avoid distraction. However, she mentions watching the trailers now and then to keep her going through the strenuous studying hours. Owing to her parents’ unending support and teachers’ guidelines, Samiksha is thrilled about her rank and aims to crack JEE Advance and pursue Computer Science. Careers360 had a little chit-chat session with Samiksha to know her journey to success. Read on to find her tips and tricks for cracking JEE Main.

Latest: [Know admission chances for NIT's, and other B.Tech Colleges based on your JEE Main 2019 Rank] - JEE Main College Predictor

Careers360: Congratulations on your performance in JEE Main 2019! What was your reaction upon knowing your score? What is your AIR?

Crack JEE 2020 with JEE Online Preparation Program, If you Do Not Qualify- Get 100% MONEY BACK

Samiksha Das: Thank you. I had expected a score of 350 but after correction, my score became 355 so I am really happy. My AIR is 20.

Careers360: Did you also appear in January? What was your score?

Samiksha Das: Yes, my score in the January session was 310 which was not very good.

Samiksha Das: For 11th and 12th standard, I studied from Disha Delphi Public School, Kota. Up to class 10, I was in DPS, Surat.

Samiksha Das: In 8th standard, I became fascinated with math and it was my favourite subject. It’s then that I decided that I want to become an engineer. I’m interested in Computer Science for the same reason.

Careers360: When did you start your JEE Main preparation? Tell us something about your preparation strategy and daily routine for JEE Main?

Samiksha Das: I started my JEE Main preparation just after my board exams got over. I did not have any particular strategy since I simply followed what my teachers said and the guidelines they gave.

Careers360: Did you face any difficulties since the examination was conducted completely in computer-based mode?

Samiksha Das: In the second attempt, the computer was a bit slow. Also, there was a power cut 2-3 times but there was a backup so we did not face any problems.

Careers360: Was there a difference in the preparation strategy in the last months of JEE Main? If you have appeared for JEE Main January, was there any difference in your strategy?

Samiksha Das: I had not read my NCERT textbooks thoroughly while preparing for the January session so I could not score well. For the April session, I strengthened my grasp on the basic topics in NCERT.

Careers360: Did you take coaching for JEE Main and if yes from where? What are the benefits of coaching according to you?

Samiksha Das: I took coaching for JEE Main and JEE Advanced from Allen. The teachers in coaching classes give you enough practice and guidelines for both the exams.

Samiksha Das: I attempted the mock tests conducted in our coaching. Yes, these papers helped a lot in improving my speed and accuracy.

Careers360: Are there any special books that you feel have helped with your JEE Main preparation? Are the school textbooks adequate for preparing for JEE Main and Class XII?

Samiksha Das: For JEE Main, one must start with NCERT and then proceed to higher level books like HC Verma. School textbooks are not enough but you should have a good grasp on the topics mentioned in them. Without that, you cannot score well like me in the January session.

Careers360: Which subject was the easiest and which was the toughest in JEE Main? What do you think is a tough thing to manage during the JEE Main exam?

Samiksha Das: Chemistry was the toughest and math was the easiest. There were some topics which we had to rote learn to memorize so that was tough for me.

Careers360: What do you think are the key factors behind your stupendous success in JEE Main?

Samiksha Das: My mother’s support, coaching classes and my teachers!

Samiksha Das: I am a huge Marvel fan but I haven’t watched Avengers: Endgame till now to avoid distraction. I plan on watching it after appearing for JEE Advanced. During my preparation time, I watched old Marvel movies and the trailers of Endgame to de-stress.

Samiksha Das: My mom and dad are my biggest inspiration because I want to be as hard working as them.

Careers360: You know you are an inspiration to thousands of students across the country. Do you have any message for future aspirants on tackling the JEE Main exam?

Samiksha Das: Do not focus on marks but on learning and understanding. Your marks will gradually improve if you stop mugging up and actually enjoy studying.

JoSAA 2020 counselling will be conducted in June. Registration and choice filling will start in J...

DAIICT B.Tech Counselling 2020 - Candidates will have to participate in the counselling of DAIICT...

Chance of getting admission in any good government college having good placement after jee mains 85 percentiles obc ncl from jharkhand/ u.p.

Some of the colleges you have the chances of admission are

You can also predict the colleges using our college predictor

Hope this will help you.

i have got 89.24 percentile in jee main if lam eligible for jee advance and did iget in any nit

It is difficult to predict score eligibility for JEE advance.

But you can predict your expected rank from the following formula :

For NIT , most probably you need 95 + percentile.

For more information you can refer to the link below : https://engineering.careers360.com/jee-main-college-predictor

This marks vs percentile chart is according to old jee mains manner.pls,publish new one for 2020 exam.

Here is the updated version of marks vs percentile of january session. You can refer to the link below :

also if you want to predict rank or your expected college you can refer to the college predictor given below : https://engineering.careers360.com/jee-main-college-predictor

how to score maximum marks in physics in jee???

I would like to inform you that to score  good marks in Physics will require dedicated efforts from your side. I would advise you to solve as many numericals as possible from previous year archives thoroughly and of each chapter. Make a proper timetable devoting time to each subject and give proper focus to Chemistry and Maths as well.Make short notes consisting of only formulas and critical concepts of each chapter. Give your best for the April attempt as it will be the decider.

You can go through the following link which will help you to boost your score:

Wishing you all the very best for your April attempt.

* If you are a coaching student then, first of all, try to solve your coaching materials I.e your sheet/DPP & coaching notes.

*If you are not a coaching student then you can buy online video lectures of top faculties of Kota.

& to strengthen your basic concept you can follow the following books

don't go directly to follow some foreign authors .first build your concept by reading all those Indian authors' books which were mentioned above.

Thank you, for any other query then pls contact us we are there for you.