JEE Advanced 2020 Topper Interview: Muhender Raj (AIR 4) - Indian Institute of Technology (IIT) Delhi released the JEE Advanced 2020 result on October 5 at the official website jeeadv.ac.in. With the release of the result, 43,204 candidates received positive news and qualified JEE Advanced 2020 while others were left disappointed. However, among these JEE Advanced candidates, some emerged on the top and presented outstanding results. Muhender Raj from Chennai, who had been preparing for the exam for the past four years, has emerged as one of the JEE Advanced 2020 toppers. Giving credit to his parents and sister for his success, Muhender also believes that time management and self motivation are the key to bring home good results. Careers360 presents an exclusive interview with Muhender Raj to know about his preparation strategies and more. 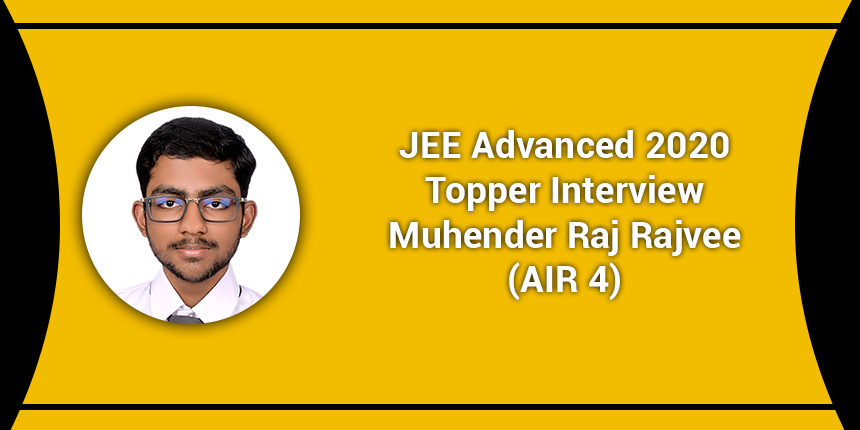 Careers360: Congratulations for your outstanding performance in JEE Advanced 2020. What was your reaction upon knowing your rank?

Muhender Raj: I felt very happy and excited that I got a single digit rank in the exam for which I had been preparing for 4 years.

Careers360: Tell us something about yourself. Which board have you studied under? Which school did you study in?

Muhender Raj: My name is Muhender Raj. I’m from Chennai, Tamil Nadu, but now I’m living in Bangalore. I studied in MB International School, Kota in the CBSE board.

Careers360: What is your overall and subject wise score in JEE Advanced 2020? What is your all India rank and category rank?

Careers360: What was your JEE Main rank and marks?

Muhender Raj: I secured all India rank 13 in JEE Main, scoring 296/300 in the September attempt and 100 percentile.

Muhender Raj: I like to study engineering as it involves creating things, both hardware and software, that would benefit people directly. I don’t exactly recall when I decided to study engineering, but I did it after considering all of my options. I am interested in the Computer Science branch, as it is a very broad field with a lot of places to specialize in, and I love coding and making computer algorithms in general.

Careers360: JEE Advanced was conducted as a computer based test. What is your opinion about it? What preparation strategy did you adapt for the computer based exam?

Muhender Raj: I started my preparation when I was in class 9. From class 11, I would study and solve problems for 12 hours a day, giving equal importance to Physics, Chemistry and Mathematics. I would solve these questions in a time limit as time management is an important skill needed in the JEE Advanced exam.

Muhender Raj: JEE Main consists of many direct and memory-based questions while JEE Advanced has a lot of questions that require you to think differently. Also, there are some topics like semiconductors, communication systems, environmental chemistry, etc that are in the JEE Main portions but not in JEE Advanced. I gave special attention to these topics a few days before the JEE Main exam.

Careers360: Since there was just a few weeks after the JEE Main, elaborate on your preparation strategy?

Muhender Raj: Since the syllabus for JEE Main and JEE Advanced are roughly the same, my preparation strategy for Advanced was similar to that for mains. I solved previous year JEE Advanced papers in the last week before the exam with a time limit and in similar timings as the actual JEE Advanced exam.

Careers360: How was your preparation during the pandemic? Did you face any problems during your preparation? Give us an insight on how your day used to be during quarantine.

Muhender Raj: The pandemic disrupted my schedule initially, but I kept myself motivated with the help of my parents and my little sister. My day during the pandemic was more or less the same as it was before, as I didn’t go out much before.

Muhender Raj: I attempted a sample paper every 3 days in the weeks between JEE Main and JEE Advanced and analyzed my mistakes. I then studied and practised those topics in which I made mistakes. I feel that this helped me a lot. I practised from the previous year papers in the week before the exam as it helps me to get in the exam mindset, which is really important.

Muhender Raj: For Physics, I practised questions from Concepts of Physics by HC Verma, and for more advanced questions, I used the book written by IE Irodov. For Chemistry, I used books published by GRB Publications. I used books by MS Chauhan and Himanshu Pandey for Organic Chemistry. For Mathematics, I recommend the book by SL Loney.

Muhender Raj: I felt both the papers had equally good questions, and since the other paper was in the evening, I was well-prepared for these questions. In my personal opinion, the first paper was easier than the second, but some of my friends had the opposite opinion.

Muhender Raj: No, I didn’t face any technical glitches. The exam was conducted fairly smoothly, with proper social distancing and sanitation.

Muhender Raj: For any competitive exam, I feel that time-management and self-motivation are the key factors. Practising solving a lot of questions made me faster at those kinds of questions, and I was able to manage time more efficiently.

Muhender Raj: I de-stress myself by playing the keyboard, just talking with my sister, and coding. I pursue these whenever I feel that I need a break.

Muhender Raj: My father is my biggest inspiration. Coming from a village, he studied hard and got admission in Anna University, Chennai, a highly esteemed institution. He got a B Tech in Leather technology and worked in China for 16 years. Then, he decided to start his own company and came to India for my studies.

Muhender Raj: I just want to say that with hard work always comes success. It’s not the end of the world when things don’t seem to be going your way. Just focus on studying without thinking about the results and they will soon automatically follow you.