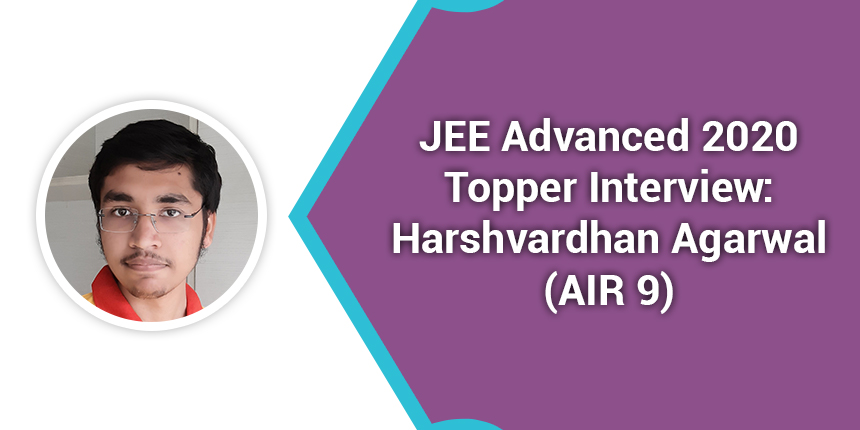 Careers360: Congratulations for your outstanding performance in JEE Advanced 2020. What was your reaction upon knowing your rank?

Harshvardhan: I was happy. After seeing the JEE Advanced answer keys, I thought I would get 6th or 7th rank but I secured AIR 9 but I was still happy.

Careers360: Tell us something about yourself. Which board have you studied under? Which school did you study in?

Harshvardhan: I am a student of Jankidas Kapur Public School and I am from CBSE Board. My father Mahavir Prasad is Retired Deputy General Manager, BSNL and my mother Seema Agarwal is an assistant professor at Hindu College in Sonepat.

Careers360: What is your overall and subject wise score in JEE Advanced 2020? What is your all India rank and category rank?

Harshvardhan: My score and rank are-

Harshvardhan: I secured 296 marks in JEE Main 2020. My Subject-wise scores were-

Harshvardhan: My brother is also pursuing engineering, so I am really inspired by him. Other than this, I had an interest in Science and Mathematics from the very beginning. I participated in many Olympiads also like the International Physics Olympiad (IPhO) 2019 held in Tel Aviv, Israel, Indian National Physics Olympiad, etc.

Careers360: JEE Advanced was conducted as a computer based test. What is your opinion about it? What preparation strategy did you adapt for the computer based exam?

Harshvardhan: I was well prepared for the computer-based test as my coaching FIITJEE Punjabi Bagh provided mock tests for the exam. I attempted those mock tests and was fully aware of the online platform. Also, I find online tests much better as it gives us an option to mark a question for review and attempt later.

Harshvardhan: I started my preparation from Class 9th. I gave 12 hours a day to my studies including my coaching classes. I attended my coaching classes at FIITJEE Punjabi Bagh. I studied all the three subjects daily and gave equal time to all.

Harshvardhan: JEE Main has easier questions as compared to JEE Advanced. I started my preparations aiming for JEE Advanced from the beginning. So, I didn't face any difficulty; you only have to complete some extra topics for JEE Main as per the syllabus.

Careers360: Since there was just a few weeks after the JEE Main, elaborate on your preparation strategy?

Harshvardhan: Like I said that I started my JEE Advanced 2020 preparation from the beginning, so I was already prepared for the exam. I appeared for the JEE Main 2020 April/September session but didn’t have any problem in preparation.

Careers360: How was your preparation during the pandemic? Did you face any problems during your preparation? Give us an insight on how your day used to be during quarantine.

Harshvardhan: Postponement of exams again and again was a bit frustrating and I also felt bored at times. My preparation was similar as before, I gave proper time to studies and when I felt bored, I played Chess or video games.

Harshvardhan: I attempted JEE Advanced mock tests from my coaching- FIITJEE. All other study material like sample papers, previous year papers was also made available by my coaching. Practicing mock tests is very important as it gives an idea of the actual examination and you can also check your preparation level after analysing your performance in the mock tests.

Harshvardhan: I would say NCERT books are must especially for Chemistry. Rest I studied with the normal books that students consider like I E Irodov for Physics. I participated in many Physics Olympiads so that gave me an extra edge and increased my knowledge of the subject.

Harshvardhan: No, I faced no problem in the exam. For me, Chemistry was the easiest section in JEE Advanced 2020 while Maths and Physics were of the same difficulty level.

Harshvardhan: For me both Paper 1 and Paper 2 were of the same difficulty level. The only difference between the two papers was a little change in pattern like Paper 1 was more concept-based and Paper 2 had integer type questions .

Harshvardhan: No, I faced no technical glitches in the exam. There was no problem in the conduction of the exam.

Harshvardhan: For me Focus and hard work are the key factors for success. Other than this, you must be continuous in your preparation. Starting early also helps a lot and gives more time to prepare for the exam.

Harshvardhan: In order to de-stress myself, I used to play Chess, video games. I also did some breathing exercises.

Harshvardhan: My inspiration in life is my brother Mannan Agarwal. He obtained 14th rank in the JEE advanced exam last year and was also among the top 200 in the JEE mains. His success always inspired me to do better.

Harshvardhan: I would like to say that there is no substitute for hardwork. If you want to succeed, hard work is really important.