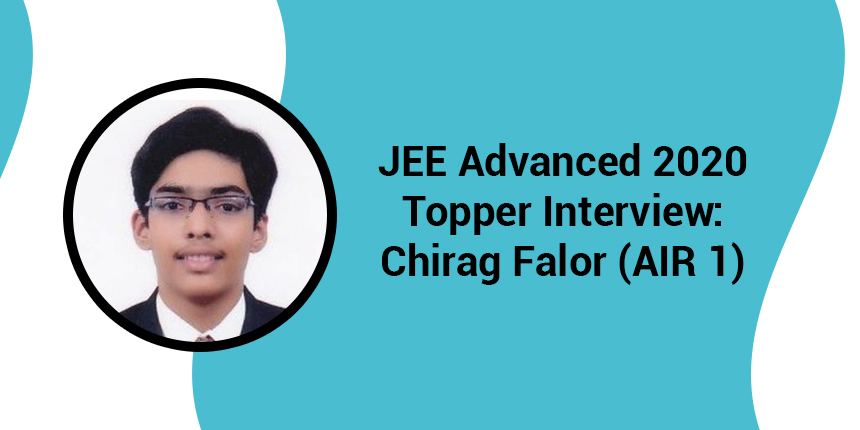 Reaction on getting AIR 1 in JEE Advanced

When Chirag got a call from the director of IIT Delhi, he had just woken up and could not digest the fact that he stood at the top in JEE Advanced 2020. He received a lot of calls that day which added to the feeling of obtaining top rank in the top engineering entrance examination of the country.

Having secured top rank in the most looked after engineering examination, Chirag is not interested in pursuing Bachelor of Engineering. He plans to pursue Bachelor of Science (B.Sc.) in Physics

Strategy for Computer Based Examination

According to Chirag, he very much likes the computer based examination (CBT) format as it allows candidates to change the previously attempted JEE Advanced questions. The coaching institute which Chirag studied in made him take up JEE Advanced mock tests on a daily basis due to which he was comfortable with the CBT format.

Based on what Chirag experienced, JEE Advanced question papers of previous years helped him a lot. A week before the exam was held, he practised JEE Advanced previous year papers and solved them just like an actual examination so that he could deal with the exam fear well in advance and manage time as well. He also recommends IE Irodov of Physics problems in general physics for preparation.

Chirag found Mathematics to be the easiest section in the JEE Advanced 2020 exam. The explanation being that while practising previous year papers, solving the Mathematics section took around 1.5 hours. While during the main examination, he was able to solve it within an hour.

When asked about what helped him relieve the stress that emerged due to JEE Advanced preparation, Chirag said that playing table tennis after lunch and dinner helped him. Apart from that, he would also play chess with friends or go to the roof for gazing at the stars to relax.

Piece of Advice for Future Aspirants

A short message by JEE Advanced topper 2020 Chirag Falor for the emerging JEE Advanced aspirants is to not lose hope in themselves. He says that at times candidates may feel tired or bored of preparing for the exam, but he advises them not to be distracted towards watching TV or playing games but instead go for studying something else. This way, they would not be wasting their time and their mind will also be distracted from boredom.