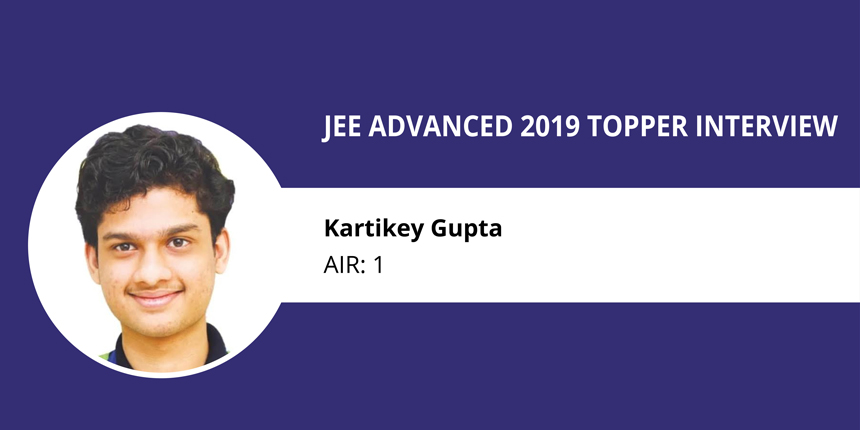 Careers 360: Tell us something about yourself, which board have you studied in, how much did you score in your class 12?

Kartikey: I am from Mumbai Maharashtra. My father Chandresh Gupta works as General Manager (Paper Industry) and my mother Poonam Gupta is a housewife. IThis year I secured 93.7 percent in Class 12th.

Careers360: What is your score in JEE Advanced 2019? What is your all India rank and category rank? What was your JEE Main rank and marks?

Kartikey: I secured 346 marks out of 360 in JEE Advanced 2019. My All India Rank is 1 in general category. I secured AIR-18 in JEE Mains 2019 by scoring 100 percentile and was Second Topper of Maharashtra State Topper.

Kartikey: My dream of pursuing engineering from IIT Bombay in CS branch is going to come true. I have qualified KVPY in the year 2017 and 2018. I have also qualified INPHO, INCHO, INAO and INJSO.

Kartikey: I always focused on studying with a relaxed mind. I did not study for long hours. Apart from regular classes, I did self-study for 6-7 hours with a proper schedule. I also gave weekly tests regularly, which helped him to do self-analysis which improved my performance. Also, I made sure to clear the doubts before sleeping. I took a break and relaxed after every two hours. I used a regular keypad phone and was never active on social media.

Kartikey: I have been studying in ALLEN Career Institute since 2017. The faculties here work very hard to help them achieve success. The student’s aim for IIT's and the goal of the faculties is to make them successful in JEE. The faculties are always available to clear doubts. Here I have made good friends and also got to know the best faculties. Joining ALLEN doubled my strength.

Kartikey: Students should study without stress. During the preparation, they should be relaxed physically as well as mentally. Self-competition plays a vital role in achieving the goal.

4 days ago
Read More
View All News and Articles

Is the JEE Advanced 2023 syllabus same or changed?

The syllabus for JEE Advanced 2023 exam is changed by the authorities, some new topics are deleted while new ones are added. You can check the syllabus at JEE Advanced syllabus 2023.

Do I need to take JEE Advanced to get into IIT Dharwad for B.Tech?

Are both the JEE Advanced Papers compulsory?

In order to qualify JEE Advanced entrance examination, the candidates have to attempt both Paper 1 and Paper 2.

What type of questions will be asked in the JEE Advanced 2023?

JEE Advanced 2023 exam will be conducted in online mode and multiple choice questions will be asked in the exam.

Is the JEE Advanced 2023 exam conducted online or offline?

JEE Advanced 2023 exam will be conducted in CBT(online mode).

JEE Advanced 2023: IIT Guwahati releases frequently asked questions on exam
JEE 2023: 75% rule to be relaxed for top 20 percentile students of each board for IIT, NIT admission