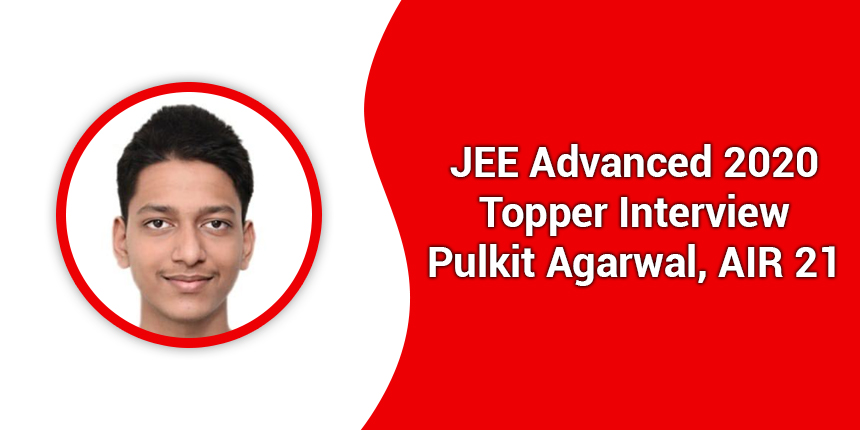 Careers360:- What was your reaction upon knowing your rank?

Pulkit:- I was extremely delighted to know that I had performed so well. I was always expecting a top 100 rank, but this was the cherry on the top.

Careers360:- Tell us something about yourself. Which board have you studied under? Which school did you study in?

Pulkit:- I completed my Class 12 from Sardar Patel Vidyalaya in Delhi, affiliated with the Central Board of Secondary Education (CBSE).

Careers360:- What is your overall and subject wise score in JEE Advanced 2020? What is your all India rank and category rank?

Careers360:- What was your JEE Main rank and marks?

Pulkit:- I have always been deeply intrigued by Physics and Mathematics. I decided to pursue Engineering as a field in class 9, and seriously started preparing towards my goal from Class 11.

Careers360:- Which branch would you be interested in? Any reason?

Pulkit:- I will be pursuing Computer Science Engineering, because it is a branch with a lot of potential for growth and learning. India is also establishing itself in this field, and I would love to contribute towards that.

Careers360:- JEE Advanced was conducted as a computer based test. What is your opinion about it? What preparation strategy did you adapt for the computer based exam?

Pulkit:- I am comfortable with the idea of an online exam, and I think that it is the need of the hour in this digital age. To prepare myself for the CBT format, I gave a number of time bound tests on computers, both offline (before lockdown) and online.

Pulkit:- I joined Vidyamandir Classes in class 9. However, I seriously began preparation for JEE from 11th. I studied from VMC modules and classroom notes for theory, and used the VMC workbook for questions. I used to study for 7-8 hours daily.

Careers360:- How was the preparation for JEE Advanced different from JEE Main?

Pulkit:- JEE Advanced is more challenging as it requires more thinking abilities. In particular, there are fewer questions, but with higher difficulty levels. Preparing for JEE Advanced requires a deeper understanding of the course material. On the other hand, JEE Mains has more straight forward questions, but one needs to be thorough with the details in NCERT books.

Careers360:- Since there was just a few weeks after the JEE Main, elaborate on your preparation strategy?

Pulkit:- After JEE Mains, I gave a number of tests in the last 3 weeks before JEE Advanced, from 9 to 12 and 2:30 to 5:30. This made sure that my mind was most efficient during the exam time period. I also focused more on revision, especially from Chemistry, since it has a vast syllabus.

Careers360:- How was your preparation during the pandemic? Did you face any problems during your preparation? Give us an insight on how your day used to be during quarantine.

Pulkit:- I found the pandemic time to be an ideal time for me to work upon my weaknesses. My teachers mentored me during this time to make sure that I didn't lose focus. My family was also a big support system during this time, especially when there was a lot of anxiety regarding exam dates. I studied in 3 or 4 hour slots, with short breaks in between.

Careers360:- Mock tests and sample papers – how extensively did you practise with the help of these? Do you think practising from the previous year papers help and how?

Pulkit:- Mock tests were a huge help in my preparation, as they gave me an idea of the areas where I needed work. They also helped me in planning how much time I need to devote to each subject during the exam, and in what order I should attempt the exam. Previous year papers are also important, as they help you to gauge the actual level of difficulty of JEE Advanced papers, and give you an idea of what to expect in the paper. However, I wouldn't suggest depending on them too much, as the paper pattern and difficulty level is different every year.

Careers360:- Are there any special books that you feel have helped with your JEE Advanced preparation?

Pulkit:- Apart from the VMC modules, I consulted Pathfinder in Physics, and books by Himanshu Pandey for Organic Chemistry and Kapil Kumar Wadhwa for Inorganic Chemistry. I didn't do any extra books in Mathematics.

Pulkit:- I found Mathematics to be the easiest, and Chemistry to be the hardest to prepare for. JEE Advanced requires one to manage both the vast syllabus, as well as the time factor during exam, and managing both is a tough task.

Careers360:- What is the main difference between both the two papers in JEE Advanced?

Pulkit:- I feel that, apart from the pattern, the two papers are similar. One needs to perform well in both the papers to get a good rank.

Careers360:- Did you face any technical glitches during the exam? What is your opinion on the way the exam was conducted?

Pulkit:- No, the exam was conducted by IIT Delhi in a fair and efficient manner, and I am happy that they conducted the exam with proper social distancing norms in these unprecedented times.

Careers360:- What do you think are the key factors behind your stupendous success in JEE Advanced?
Pulkit:- By God's grace, the support and blessings of my family and teachers, and my own hard work, I was able to perform well. I also think that staying away from social media helped me stay determined.

Careers360:- How did you de-stress yourself during the preparation? What are your hobbies? How often could you pursue them?

Pulkit:- I used to watch YouTube sometimes to de-stress myself. I also like to sing, and frequently took part in various events at my school.

Careers360:- Who is your ideal or biggest inspiration in life and why?

Pulkit:- My biggest inspiration is my father, who is also an engineer. He was my first teacher, and is an all- rounder in terms of knowledge. He has always motivated me to improve myself, move forward, and deal with both failure and success.

Careers360:- You know you are an inspiration to thousands of students across the country. Do you have any message for future aspirants on tackling the JEE Advanced exam?

Pulkit:- I would just like to say that keep yourself focused on your studies. Don't get disheartened by failure, instead promise yourself to bounce back harder. Finally, one exam doesn't make or break your life, so don't stress too much on the result.

hey i am rishabh in 2018 i move on to sikar for iit jee preparation but there i found out i am diagnosed with a mental disorder named OCD and its a hell then i came to my home and did class 11 and 12 but did not give iit exam but i am repeating class 11 and 12 can i give jee exam now. i never give.

If the year 2021 was your 1st attempt then you are eligible for appearing for both JEE MAIN and JEE ADVANCED.

But to you to clear the cutoff of JEE MAIN to be able to write the exam of JEE ADVANCED.

there's differnce between eligibilty and qualification.

i hope this helps

is it true that in 2022 jee advanced aspirants are getting 4 attempts?

can get admission in naval architecture through jee mains paper 1? or have to give jee advanced ?

BTech in Naval Architecture and ocean engineering is a 4 year undergraduate course.

Yes , you can get admission thorough JEE Mains itself. The basic eligibilty is -

The course fee is around Rs. 1.5 Lakhs per annum.

can i get addmission in naval architecture through jee mains?or i also have to give jee advanced?

The Following exams are conducted for admission in naval Architecture :

Well, the basic eligibility criteria is as follows :

Some skills you need to have for learning this course :

For more details, refer this :