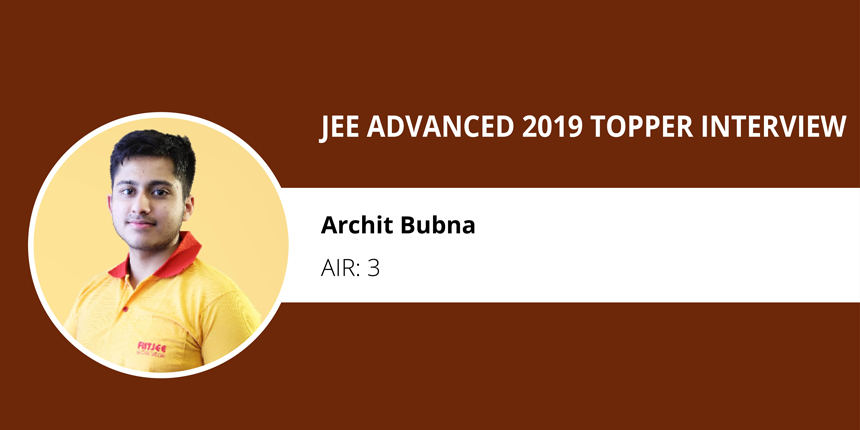 Careers360 Team: Congratulations for your outstanding performance in JEE Advanced 2019! What was your reaction upon knowing your rank?

Archit: It feels great to secure AIR 3 in JEE Advanced 2019. I was expecting a good rank but coming in top 10 came really as a surprise.

Careers360 Team: Tell us something about yourself. Which board have you studied under? Which school did you studied in?

Archit: I basically belongs to Delhi and studied in Amity International School.

Archit: I have really enjoyed studying Science ever since I was a young boy. My interest took me to select PCM in class 12 which made me further interested in Engineering and Science.

Careers360 Team: How was the preparation for JEE Advanced different from JEE Main?

Archit: The preparation was quite similar but since the difficulty level of Advanced is high then the Advanced, I use to practise questions to the level and standard of Advanced. The test series and mock papers helped me a lot to prepare for the exam.

Careers360 Team: Since there was just a month after the JEE Main, elaborate on your preparation strategy?

Archit: After the result for JEE Mains was declared, I focussed solely on practising questions. I have already covered all the topics during my JEE Mains preparation

Careers360 Team: Did you take coaching for JEE and if yes from where? What are the benefits of coaching according to you?’

Archit: I did my preparation from FIITJEE coaching institute in Delhi. Coaching helped me in a lot of ways from guiding me, motivating me, providing the study material, personal mentoring and most importantly solving my queries and doubts. I would say preparing without coaching could have been really difficult.

Careers360 Team: Mock tests and sample papers – how extensively did you practise with the help of these? Do you think practising from the previous year papers help and how?

Archit: I practised the mock tests and practise papers provided by the coaching institute. I also appeared in the All India test series of FIITJEE which made me understand my stand and preparation level. Solving mock papers and practising the previous year papers are really beneficial.

Careers360 Team: Are there any special books that you feel have helped with your JEE Advanced preparation?

Archit: I studied Physics from Irodov and HC Verma and also referred some foreign authors for Chemistry.

Careers360 Team: What is the main difference between both the two papers in JEE Advanced?

Archit: The main difference I would say is in the difficulty level wherein I found the afternoon session a bit more difficult then the forenoon session. The questions in Physics were particularly more indepthly formulated and required high level of thinking and analysis.

Careers360 Team: Who is your ideal or biggest inspiration in life and why?

Archit: My parents are my biggest inspiration. They stood by my side throughout my preparation and always use to motivate me whenever I felt low.

Careers360 Team: You know you are an inspiration to thousands of students across the country. Do you have any message for future aspirants on tackling the JEE Advanced exam?

Archit: I would say regularity is most important. One should stay focussed in preparation and keep studying as per the syllabus and pattern of the exam to succeed.

Is the JEE Advanced 2023 syllabus same or changed?

The syllabus for JEE Advanced 2023 exam is changed by the authorities, some new topics are deleted while new ones are added. You can check the syllabus at JEE Advanced syllabus 2023.

Do I need to take JEE Advanced to get into IIT Dharwad for B.Tech?

Are both the JEE Advanced Papers compulsory?

In order to qualify JEE Advanced entrance examination, the candidates have to attempt both Paper 1 and Paper 2.

What type of questions will be asked in the JEE Advanced 2023?

JEE Advanced 2023 exam will be conducted in online mode and multiple choice questions will be asked in the exam.

Is the JEE Advanced 2023 exam conducted online or offline?

JEE Advanced 2023 exam will be conducted in CBT(online mode).

JEE Advanced 2023: IIT Guwahati releases frequently asked questions on exam
JEE 2023: 75% rule to be relaxed for top 20 percentile students of each board for IIT, NIT admission