JEE Advanced 2018 Topper Interview: Neel Aryan Gupta (AIR-10) - “Learn from your mistakes and do not repeat them 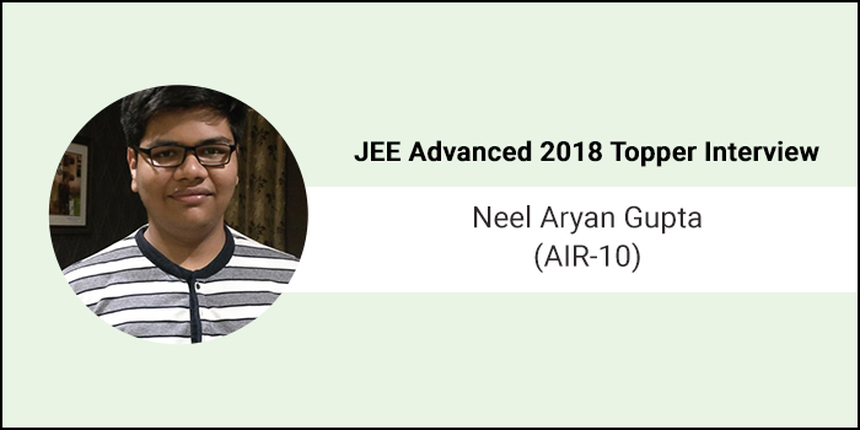 Careers360: Congratulations for your outstanding performance in JEE Advanced2018! What was your reaction upon knowing your rank?

Neel Aryan Gupta: I was extremely happy when I came to know about my result as I was expecting to be among the top 20. However getting AIR 10 in JEE Advanced 2018 was like a dream come true.

Neel Aryan Gupta:  I want to  take up engineering since I really enjoy studying maths. I made up my mind to take up engineering I was in standard ninth. I was very much inspired by one of my cousins who also studied Computer Science and is presently based abroad.

Neel Aryan Gupta:  I think computer based tests are good as one has the option to change or review the answers. It did not change my preparation strategy in any way. I just tweaked the strategy in the last days before the exam when I took the JEE Advanced mock tests and practiced with past years question papers of JEE Advanced in online mode.

Neel Aryan Gupta: If you look at it, I casually started preparing for the JEE in class IX. However, the actual serious preparation started in Class XI when I completely focussed on the JEE exam.  Preparation is all about time management. First of all I completed the theory aspect. Every day I would devote ten to twelve hours towards my JEE preparation.

Neel Aryan Gupta: The last one month before the exam was a bit tough for me as I was diagnosed with a serious medical ailment. After I appeared for JEE Main, I underwent the requisite surgery and for the next two weeks I could not get up due to which I had to study laying down on the bed. Ideally all the students should solve the past years question papers a month before the exam. However, since I was not keeping well, I could only do that for about ten days before the exam.

Neel Aryan Gupta: I took coaching from the Allen Institute. One of the biggest advantages of coaching is that it helps you to acquire better conceptual knowledge.

Neel Aryan Gupta: I would take JEE Advanced mock tests regularly. I feel that the difficiulty levels of these mock tests should be high as only then then can one prepare for the actual exam. Then the difficulty levels of the actual exam will not matter. One important tip is to solve the past years JEE Advanced question papers within the same time frame as the main exam. These two exercises - past year papers and mock tests boost the confidence and allow students to get used to actual difficulty levels of the questions as well as gauge their level of preparation.  All weak areas must be worked on once candidates get to be aware of them during this practice sessions.

Neel Aryan Gupta: The books  I would recommend are

Neel Aryan Gupta: I did not face any problem as such during the JEE Advanced 2018 exam. I found Physics very easy. As far as Maths and Chemistry is concerned, it is difficult for me to say which of the two was difficult as I used to score well in Maths during my preparation days.

Neel Aryan Gupta: There was no technical glitch. It is good that JEE Advanced is being conducted in computer based mode.

Neel Aryan Gupta:The teachers at the coaching institute guided me well throughout the course of preparation.  It is with their help that Maths became one of my very strong points. My parents are my pillars of strength. The other  reason for my success is that I worked hard to reduce the careless mistakes which I was initially  making during the exam. It is very important that the silly mistakes are rectified during the early stage of the preparation as it makes a lot of difference in the marks that you score and the rank that you will get.

Careers360: How did you de-stress yourself during the preparation?What are your hobbies? How often could you pursue them?

Neel Aryan Gupta:  I used to relax by listening to music and playing video games as well as watching movies. There was never that much  time to pursue my hobbies but I did pursue them when I could as it helped reduce my anxiety.

Careers360: Who is your biggest inspiration in life and why?

Neel Aryan Gupta: My mother is my ideal. Being a working professional, she maintained a balance between her professional and personal life while paying due attention to my studies. Her  motivation and continous support has been one of my strengths.

Neel Aryan Gupta: It is essential to learn from one’s mistakes. Take your mistakes seriously and ensure that you do not repeat them. There are a number of students who have a good understanding of the concepts but lose out on account of the silly mistakes. Every mark counts.