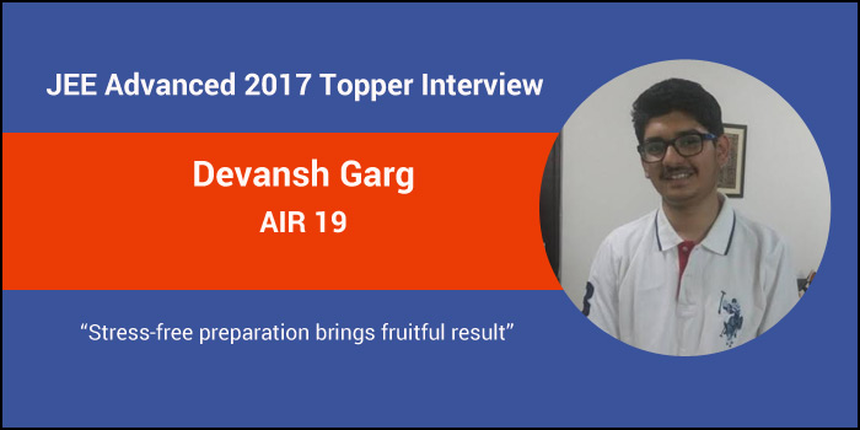 Unlike the other days, June 11 turned out to be a bit special for Jaipur boy Devansh Garg who secured All India Rank (AIR) 19 in JEE Advanced 2017. It was a joyous moment for this Jaipur boy who is an avid gamer and a computer enthusiast. Devansh found his inner calling in his childhood when he recognised his love for computers. The topper believes that hard work when coupled with stress-free preparation, ensures a greater possibility of cracking the IIT admission test. Having scored 320 out of 366, the topper wants to pursue Computer Engineering and make a name for himself in the gaming world. In an interview with Careers360, the champion from the Garg Clan wears his heart on his sleeves while sharing his journey of the preparation phase.

Excepts from the Interview:

Careers360: Congratulations for your outstanding performance in JEE Advanced 2017! What was your reaction upon knowing your rank?

Devansh Garg: Thank you! Though I am happy but not as I should have been, as I could not manage to meet my expectation to be in the top 10 rank holders.

Devansh Garg: My Father is an Electrical Engineer who runs his own business and my Mother is a Chemistry Professor. I have studied at Jayshree Periwal High School, Jaipur which is under CBSE Board.

Devansh Garg: I am very passionate about gaming and I want to make my career in this domain only. This is the reason that I want to study Engineering and pursue Computer Science.

Devansh Garg: I had started preparing for JEE Advanced from a very early stage while I was in class 8. In 8th, 9th and 10th class, I took coaching from FIIT-JEE whereas in class 11th and 12, I switched my coaching to Allen Kota.

There was no special strategy for preparation. The days when I had coaching classes, I would study 5-6 hours, while on other days, my study routine would be 8-9 hours a day. I would try to maintain this routine throughout.

Devansh Garg: Yes, I did. From class 8 to 10, I took coaching from FIIT-JEE, while in class 11th and 12th I was enrolled in Allen coaching classes. In my view, though coaching is not mandatory, however, there are some advantages of coaching which you will not get the benefit of with self-study. The biggest among the benefits is that at the coaching you get a competitive environment. Coaching helps you clear your doubts and understand the concepts fundamentally. You can discuss, ask the clear your doubts wherever you have a challenge. They also recommend some books to you. Motivation by the faculty and the study material they provide is also quite helpful.

Devansh Garg: I did not take any other sample papers or mock tests, but the only one which were provided to me by the coaching institute. I think if we practice them seriously and sincerely, then they are sufficient for cracking the exam.

Devansh Garg: I could attempt and complete my paper well in advance. For me, it was an easy paper. Amongst the sections, Mathematics was the easiest, Chemistry moderate and Physics toughest. As I faced no challenge in attempting the paper and completing it, I think, there is nothing tough to manage.

Careers360: The answer keys revealed bonus marks for 5 questions. Did you answer those questions? What was your reaction while answering them and after the answer key announced the bonus marks?

Devansh Garg: Yes, out of the 18 bonus marks given for 5 questions, my answers against 4 questions were correct. Only 1 with 3 marks was incorrect in Physics section. So, the bonus marks come with little benefit for me.

Devansh Garg: I would recommend the following books for JEE preparation:

Devansh Garg: Confidence, hard work and not taking pressure are some key elements for me. We must not study everything. Do a little research and find out the syllabus and study as per that. Also, we must not study all the time. In my own preparation, I used to study 3 hours, then would take a break and sit again. I feel not studying under pressure or not being stressed is what is of utmost importance which I myself did.

Careers360: What are your hobbies? How often could you pursue them?

Devansh Garg: I have hobbies like playing cricket, watching TV, playing computer games, movies, however, I had no time to pursue them in the last 2 years. Though I would take small breaks, but could not pursue my hobbies in entirety.

Devansh Garg: I would say believe in yourself that you can do it and do not feel any pressure of the long hours study or preparation.

Stay tuned to engineering.careers360.com for more news and updates on JEE Advanced 2017.

Get real-time alerts on exam & colleges at your fingertips with Careers360 App! Click Here to Install or Give a missed call on 08080944727 to get app link

I got 75percent in jee mains January 2020 under BC category will i apply for jee advance?

HELLO ASHWINI
since it is very difficult to predict the exact rank but we do have a backup> we have a formula to calculate the expected rank that is (100 – Total percentile) x 869010/100.So according to formula your expected rank for present percentile for January session comes out to be 217252 . Now the expected rank might change depending on the no of candidates appearing the april session. For ex if 12 lakh candidate appear the april session then just replace 869010 by 12 lakhs. But if you score above 85 percentile then you have a very decent chance of qualifying jee mains.
Well since the cutoffs are yet to be decided let us analyse using previous year cutoff
2019
Other Backward Classes (OBC-NCL)  74.3166557
It seems you are very close to the OBC cutoff you have a minor chances of qualifying JEE mains.

But if you are curious to know that which college you might land into with your percentile then you can use the college predictor link which has following features;