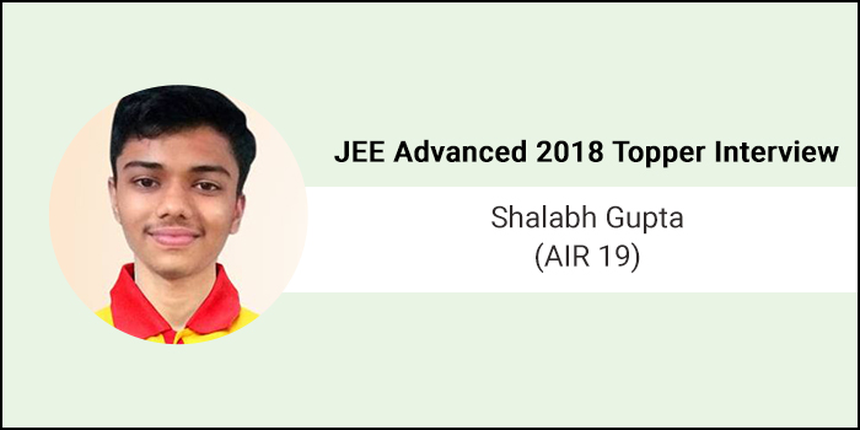 JEE Advanced 2018 Topper Interview: Shalabh Gupta - Aided by a strong determination and a serene nature, Shalabh Gupta found himself in the exalted ranks of the JEE Advanced toppers on June 10 with his all India rank of 19 when the results were declared by IIT Kanpur.  Having performed well, the result was a complete surprise to Shalabh who was ecstatic at inching more close to his dream of studying Computer Science Engineering at IIT Bombay. Shalabh believes his success mantras include lots of practice especially with mock tests and sample papers that allowed him to keep calm inside the exam hall and attempt the exam with a clear head. Careers360 interacted with him to know more about his JEE Advanced journey, preparation strategy, motivation behind his success, future plans etc. Read full interview of JEE Advanced 2018 Topper Shalabh Gupta (AIR 19) below to know all about his JEE journey.

Latest : Boost your Preparation with Personalised Coaching, Unlimited Mock Test and Faculty Support. If you Do Not Qualify- Get 100% MONEY BACK. Know More

Shalabh: Thank you. I was actually surprised to see my result and thought for a second that I had opened the wrong one. It was unexpected. I am very happy.

Crack JEE 2020 with JEE Knockout Program, If you Do Not Qualify- Get 100% MONEY BACK

Shalabh: I am 18 years old and like playing and watching football. I want to pursue computer science at IIT Bombay. I studied my class 12 at NK Bagrodia Public School, Dwarka under CBSE board.

Shalabh: I wanted to go into the engineering field as PCM (Physics, Chemistry and Mathematics) were my favorite subjects and I used to focus more on them. I decided to study engineering in class 9th.

Shalabh: I believe making the exam online was a good step taken as it reduced chances of mistakes like the printing mistakes in last year’s question paper and OMR filling mistakes. However, there was no change in my study strategy; I just had to practice more online exams before appearing for the real one.

Shalabh: I started my JEE preparation at the end of class 10. There is nothing special about the way I prepared, just that I followed whatever my teachers prescribed and most important I enjoyed preparing for entrance exam.

Shalabh: JEE Main is comparatively easier and thus requires a theoretical approach to things. One who has a good grasp on theory can crack JEE Main. But for JEE Advanced, one needs to practice a lot of questions across all difficulty levels. Also, many topics in JEE Main needed to be memorized and this was not there in Advanced.

Shalabh: Since I had done the theory part for JEE Main, I had to only focus on questions and deep knowledge of topics so I started revising previous year questions and practicing about 1 mock paper each day.

Shalabh: Yes, I took coaching from FIITJEE, Dwarka center. I believe the teachers at my coaching centre are very experienced and this helped me a lot. Also, you are forced to think out of the box; all of this is much more beneficial than preparing without any help.

Yes, students should purchase books containing previous years questions with solutions as they give you a real idea of the exam.

Shalabh: Nothing special. I practiced from HC Verma for Physics the day one of my preparation. It helps in building concepts and later I used IE Irodov to build on it. For Chemistry, I referred to only worksheets I got from coaching.

Shalabh: No, I didn't face any technical problems during the exam. According to me, Physics was the easiest and Maths the toughest. It is difficult to remain calm during the exam and most students start panicking. Paper 1 was moderate while paper 2 was difficult. I am happy with the way the exam was organized as there were very less errors.

Shalabh: The key factors for my success are the practice hours I put in and the daily struggle which made me tough enough to keep calm inside the exam hall. I also believe my calm temperament which I developed due to mock tests was also instrumental.

Shalabh: I used to de-stress by talking to my friends on WhatsApp and also used to watch football. Watching and playing football is my hobby. I used to go and play about twice in a month in class 11th, but had to abandon it in class 12th.

Careers360:  Who is your ideal or biggest inspiration in life and why?

Shalabh: Leo Messi, Argentine professional footballer is my idol and inspiration. He came from a very small family, and still went on to become the one of the greatest football player due to his determination and hard work.

Shalabh: I advise all the students to just believe in their teachers or mentors and do as they prescribe. Also not to run here and there to gather knowledge, just revise whatever you know again and again.

Hello,
The registration process may start from May 2, 2020 which is tentative.There is no official notification released yet.So you have to wait until it is announced officially. The candidates who have qualified JEE main are eligible to appear for JEE advanced.The exam is on May 17, 2020.

Hey there hope you're doing well
Dear aspirant, congratulation on scoring a good percentile in the JEE MAIN examination. According to your percentile score in JEE MAIN your expected rank is about 30,415. With this rank you're likely to get into NITs. But it's good as you want to improve in your percentile and rank. As far as preparation is concerned since you have secured a decent rank in JEE MAIN a little effort would take you under 10k rank. For JEE ADVANCED you need to focus on analytical questions; problems that require in depth knowledge of subject matter. Joiningof coaching benefits you as they create a good competitive environment. Give full length test series a d practise more no. Of questions. Also absolve previous year JEE MAIN + ADVANCED problems.
Thank you hope this helps you!
Read More
Answer
Answer Later
Report
16 Views

Hello.
It is quite difficult to tell you the latest cutoff percentile to be qualified JEE mains for JEE advanced but yes by analysing the previous year records I can tell you that how much percentile probably you basically need to have, So for general category you need to have at least 85 percentile.
And remember the above percentile is on the basis of previous year record it may fluctuate with some factors.
Best of luck.
Read More
Answer
Answer Later
Report
12 Views