Following his elder sister's footsteps, Pawan Goyal started his JEE preparation when he was in class 11 like all aspirants but fate had something else for him in store. As the result of JEE Advanced 2018 was announced on June 10 by IIT Kanpur, Pawan got to know that his hard work has uplifted his All India Rank JEE Main rank of 6 to an All India JEE Advanced rank of 4. Hailing from Jaipur, Pawan has completed his 10+2 from Aklank Public School in Kota and has a keen interest in Computer Science Engineering which he wants to study at IIT Bombay. In an exclusive interview with Careers360, Pawan shares his JEE Advanced preparation strategy and plans ahead. Read the article below to know more about him. 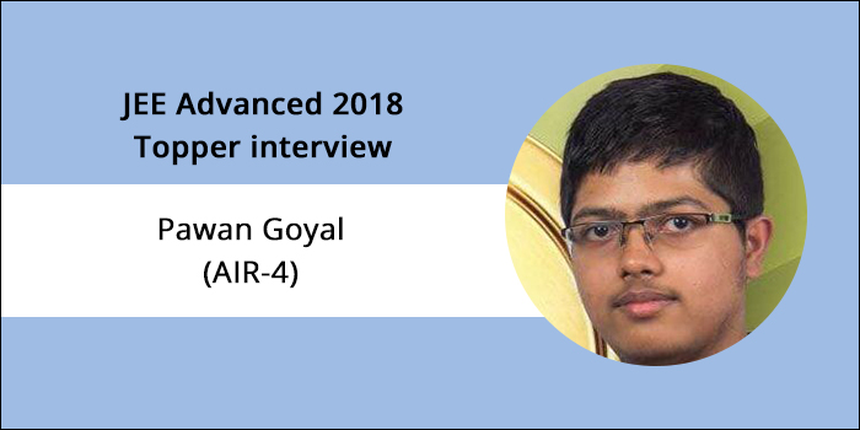 Pawan Goyal: Thank you so much. I was very happy as this is something beyond my expectations.

Pawan Goyal: I am from Jaipur. My father has a transferrable job so he stays in Noida. I came to Kota with my mother and sister when I was in class VII. I have studied in Aklank Public School affiliated to CBSE board.

Pawan Goyal: My elder sister inspired me to study engineering as she has studied from IIT. I want to study Computer Science Engineering (CSE) as it has a lot of scope in terms of start-ups and financially too. My interests also lie in CS branch. I want to go to IIT Bombay.

Pawan Goyal: In the initial stages, I felt it was time consuming when you have to make diagrams, do calculations etc. Then in online mode, it becomes a bit difficult as there is no longer an option of working it all out. It was because of this, I had to make a change in my preparation methodology. We practised lot of question papers in our coaching centre which helped.

Pawan Goyal: I started my JEE Advanced preparation in class XI. I used to study for 6 hours in coaching and 5 hours at home with breaks in between.

Pawan Goyal: There was no specific preparation strategy for JEE Main as when you are preparing for JEE Advanced, the syllabus gets covered in the same.

Pawan Goyal: I focussed mainly on revision. I made sure that I revised all the syllabus of the entrance exam and not start with any new topics or concepts.

Pawan Goyal: Yes, I took coaching from Resonance, Kota. I think coaching is really helpful as it provides you with all the study material otherwise you will have to struggle and compile it yourself which in turn is a waste of time.

Pawan Goyal: No, there were no special books. I relied on the study material provided by my coaching institute.

Pawan Goyal: No, not as such. Physics was the easiest and Maths was the toughest. Time management is something that becomes difficult during the exam as numericals and long calculations were involved such that accuracy up to 2 decimals had to be delivered.

Pawan Goyal: There was no difference as more or less pattern of both the papers was same and marks were also equally distributed in both.

Pawan Goyal: No, I didn't face any technical glitches during the exam. I think we were the first batch to face this experiment. Everything at first is not easy to accept but sooner or later transition flows in.

Pawan Goyal: It was my parent's support; coaching institute's guidance and consistent study that helped me achieve this success.

Pawan Goyal: I used to go for a walk and watch television during the preparation period.

Pawan Goyal: My sister is my biggest inspiration as she was in IIT and that's what inspired me to study for it.

Pawan Goyal: I would say that there are two things – one is interest and the other is consistent study. Many students who are not interested and are pressurised to study, especially for IITs will not do well as it is not their interest area. The combination of interest and consistent study will help you achieve success everywhere.