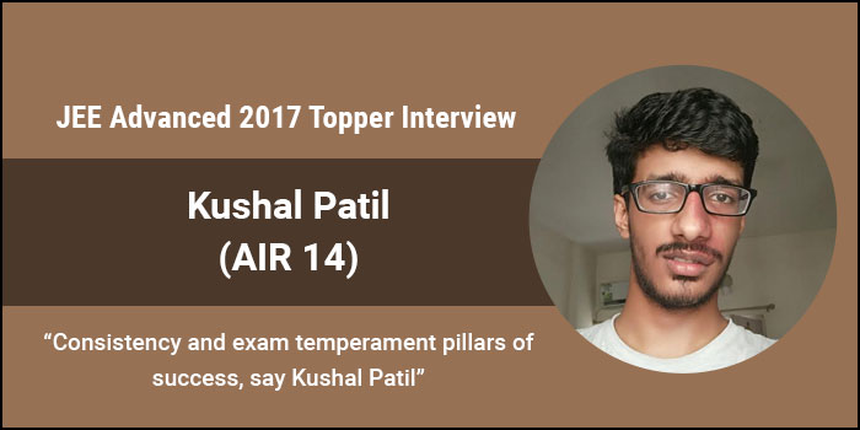 Get ready to stay on the course and start building an exam temperament, is the message that Kushal Patil, the AIR 14 holder has for young JEE Advanced aspirants. The Delhi boy, who was caught unawares by the result, as he wasn’t expecting to do so well, is all for working hard, not letting up the intensity and keeping the focus on the target at all times. Kushal stresses that by being consistent and focused, every aspirant will be able to adapt to the rigours of JEE Main preparation as well as JEE Advanced. However he cautions that it’s also not right to be on the guard at all times, as that can be counterproductive. Kushal has his own solution to keep stress at bay, by creating music on his guitar. When we enquired what he plans to do next, he said he wants to pursue computer science, as he believes, it is in tune with his love for logic and analysis. Read the complete interview to learn what this bright student has to say on a wide range of questions that we threw at him!

Careers360:  Congratulations on your outstanding performance in JEE Advanced 2017. What was reaction on finding out your score?

Kushal Patil: I wasn’t expecting an AIR of 14 at all, so it all came as a sweet surprise. I was very happy and celebrated by clicking pictures.

Careers360: Tell us something about yourself. Which school have you studied in?

Kushal Patil: I studied at Nav Uday Convent Senior Secondary School, which is affiliated to CBSE. In the recently concluded JEE Main I scored AIR 211.

Careers360:  What is your score in JEE Advanced 2017? What is all your all India rank and category rank?

Kushal Patil: I feel a natural affinity towards engineering because I am a very logical person and am good at analysing things. That being said, it was only recently, as early as last year that I finally found my calling in engineering.

I want to pursue Computer Science. One big reason being, there isn’t a lot of memorising involved. Instead what you get is logical explanations, codes, calculations, and other such stuff that suite me.

Careers360: When did you start your JEE Advanced preparation? Tell us something about your preparation strategy and daily routine.

Kushal Patil: I started my preparation in Class XI. I used to study for six-seven hours every day. One thing I made sure of was to be consistent throughout and not waste even a single day. Also, I made it a point to study one subject a day, instead of moving from one subject to another. I generally would start with the theory and gradually move to problems. It was a strategy that worked for me.

Careers360: How was the preparation for JEE Advanced 2017 different from JEE Main?

Kushal Patil: One major difference between JEE Main and JEE Advanced is the former asks many questions that are memory based. If you memorise stuff well, you can do well.

Careers360: Since there was a month after JEE Main, what was your preparation strategy?

Kushal Patil: It is a very crucial stage of JEE Advanced preparation, so you have to work hard and not let up. Also, while moving from JEE Main to JEE Advanced, one needs to get one’s body clock right.

In the last month I restricted myself mostly to doing mock tests. At times I did question papers of only mathematics, and at other times Physics. Easier papers I tried to complete in about two and a half hours, while I took three hours to complete the difficult ones. Using this methodology, I managed to complete either three easy papers a day or two difficult ones.

I didn’t do question papers from previous years, because most of the questions were covered when I was solving chapter-wise questions.

Careers360: Did you take coaching for JEE and if yes from where? What are the benefits of coaching?

Kushal Patil:  Yes, I took from FIITJEE. Coaching is useful because it helps you know where you stand in the competition. Peer group interaction is another benefit of taking coaching.

Careers360: How extensively did you practise mock tests and sample papers?

Kushal Patil: I did a lot of mock tests and sample papers, especially in the last lag of the competition after JEE Main. Sometimes I did question papers of Physics, sometimes Mathematics, and at other times Chemistry.

Careers360: Are there any special books that you feel helped you in your preparation?

Kushal Patil: I followed books by JD Lee, HC Verma, I. Irodov, as well by books by Arihant publications.

Careers360: Did you face any problem during JEE Advanced examination? Which subject was the easiest and which was the toughest? What according to you is the most difficult thing about the exam?

Kushal Patil: I didn’t face any problem as such. The only thing that crossed my mind at times was what if I didn’t succeed and all my hardwork and years of preparation went in vain.

I found Mathematics to be the easiest, and Physics the toughtest.

To me the most important component that a student must possess is exam temperament and composure. The pressure of the exam can be immense and unless you are able to keep your head balanaced, things can get out of control pretty fast.

Careers360: Did you find any difference in JEE Advanced Paper I and Paper II?

Kushal Patil: Both the papers were the same, except Paper I was easier.

Careers360: The answer keys revealed bonus marks for 5 questions. Did you answer those questions? What was your reaction while answering them and after the bonus marks were announced?

Careers360: What do you think are the key factors behind your success?

Kushal Patil: I worked hard for success, and tried to improve my exam temperament, which is a crucial element of success. I also saw to it that that I remain consistent in my preparation and not fall behind schedule.

Careers360: How did you de-stress during your studies? And what are your hobbies?

Kushal Patil: Yoga and meditation helped me keep a balanced state of mind and de-stress. My hobbies include playing the guitar, from three to four times a week with one hour devoted exclusive to it.

Careers360: Who is the biggest inspiration in your life?

Kushal Patil: I can’t think of anybody right now who has been an inspiration.

Careers360: You are now an inspiration for many young students across the country. What is your message for future JEE Advanced aspirants?

Kushal Patil:  The two pillars for succeeding in JEE Advanced is consistency and exam temperament. JEE Advanced preparation can spread over months, or years and without consistency, it can derail a candidate. Likewise, exam temperament is the key to handling pressure during crucial moments. A cool head, for example, can earn one a few marks here and there, enough to make all the difference to where one lands up in the final rankings!

I have not given jee exam in 12 th .how many attempt does I have for jee advance