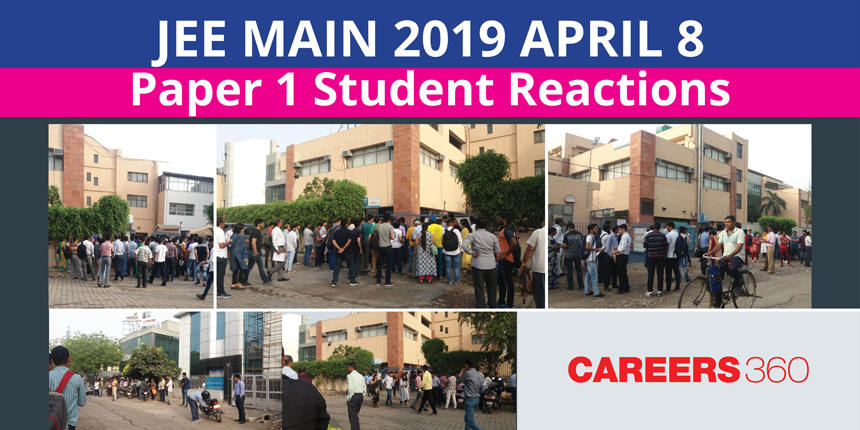 Anuska Gupta "She appeared in the January session. She felt that it was really better than the January session of JEE Main 2019 examination. According to her, Mathematics was easy when compared with the January exam. Almost all the topics covered in all sections. There is so specific section that dominated the examination. Speaking about the computer-based test, she was comfortable and has completed the exam within three hours".

Lakshay says I have also appeared in the January exam. Overall the examination was not so easy and not so difficult. Chemistry was very easy, Physics was difficult and Mathematics was moderate.

According to Kunal, the paper was good. Physics was difficult and Chemistry was easy. He had not attempted January session and he attempted all questions within the specified the time.

Sachin found that the paper was moderate (overall). Chemistry was easy. He also appeared in January exams and said comparatively January exam was easier.

Abhishek "The paper was good. Mathematics was most difficult and Chemistry was easiest. He did not attempt all questions and it was his first attempt."

Anup says, "The exam was of moderate level. Chemistry section was moderate in which the Physical Chemistry questions were hard. Inorganic Chemistry was easy. Maths was also moderate. Physics was hard. Compared to the January exam, this paper was harder. He is expecting 80 to 100 marks."

Ramya from Delhi "She was satisfied with the examination. According to her, Physics and Mathematics were moderate and Chemistry was very easy. Questions were asked from Mechanics, Modern Physics for the Physics section. All topics were given equal weightage. She is expecting more than 100 marks.

Shruti says, "The paper is balanced and she finished the examination within the allocated time. She appeared in the January session." According to Shruti, Maths was moderate, Physics was difficult and Chemistry was easy.

Swati, a student prepared from FIIT JEE. She has strategized to appear first for Mathematics and then Chemistry with Physics. She studied with FIIT JEE package books and also used HC Verma for Physics. She expects to score around 160 marks and wants to take admission in either of the IITs or NITs.

Ravi Singh from Assam is expecting to score around 180-200 marks and wants to take admission in IIT Bombay. He studied from  FIIT JEE coaching institute.

Sanjana has prepared well for the exam and also appeared in the January session. She has prepared from Resonance and wants to take admission in NITs or DTU. She prepared Physics from HC Verma and Chemistry from NCERT.

Aman Sharma, a dropout student from Delhi has prepared self. He is expecting to score around 140 marks.

Tusshar says "Physics was tough, Chemistry was moderate, Maths was easy. It was his first attempt. He is expecting 100 marks and there we no technical glitches during the online test. He has also appeared in the January session."

According to Prayag, "Physics was easy, Maths was difficult and Chemistry was moderate. He is expecting a decent score. He also appeared in the January session.

Vaibhav from Delhi says "Mathematics was easy, Chemistry and Physics were moderate." "There are two or three questions asked from Quadratic equations. One question in Maths is from the complex number which is tough, He added."

Sawan Kumar Sharma, “ I followed HC Verma for Physics, RD Sharma objective in Maths and NCERT in Chemistry. I took coaching from FIITJEE. I think Maths and Chemistry are my strong areas. I took the examination in January too.

Rohit says he was studied in CBSE board. He consulted DC Pandey for Physics, OP Tandon for Chemistry and for Maths, SK Goyal.” “Physics is my strong area and I had appeared for the January exam too,” He added.

Ayush hasn’t taken any coaching and has self-prepared. He consulted Arihant and NCERT for the exam preparation. He told that his strong area is Mathematics and Physics is a bit weak. According to him, the computer-based mode is much better.

Sohail “I took coaching. I took mock tests in coaching for preparation. Chemistry is my strong area. I want 99+ scores. I appeared for January mode examination. I feel NTA is doing a beautiful job but I wish the examination should be done only on one particular day.”

Manoj Kumar studied in CBSE board. He has taken coaching from Aakash. He thinks Physics and Chemistry are his strongest areas. He is expecting around 100 to 110 marks. He took the examination in January too.

Akshay says, "I took coaching classes for exam preparation. I appeared in the January exam also. Last time, his chemistry teacher told him to focus on NCERT book (organic chemistry) because it is the only target to score good marks in Chemistry section. My strong area is Mathematics." According to him, scoring marks in Physics section depend upon regular practice.