JEE Main 2020 Topper Interview (Rongala Arun Siddardha) (100 Percentile): Rongala Arun Siddardha has made a place for himself among the top by securing 100 percentile in JEE Main 2020 Paper 1 which was recently conducted. Rongala has completed his schooling from the Telangana State Board and did his coaching at Sri Chaitanya IIT ACADEMY, Madhapur. Giving all of the credit of his success to the mentors, Rongala mentions that he was shocked upon seeing his score in JEE Main exam. Emphasizing on the importance of time management and mental balance as some other factors that helped him score 100 percentile, JEE Main topper Rongala Arun Siddardha is happy with his percentile but will also be appearing for the April session. Stating Sundar Pichai as his ideal inspiration because he originally belonged to a middle-class family, Rongola also wants to become like him in the future. Read the excerpts below for the detailed interview of JEE Main 2020 topper Rongala Arun Siddardha. 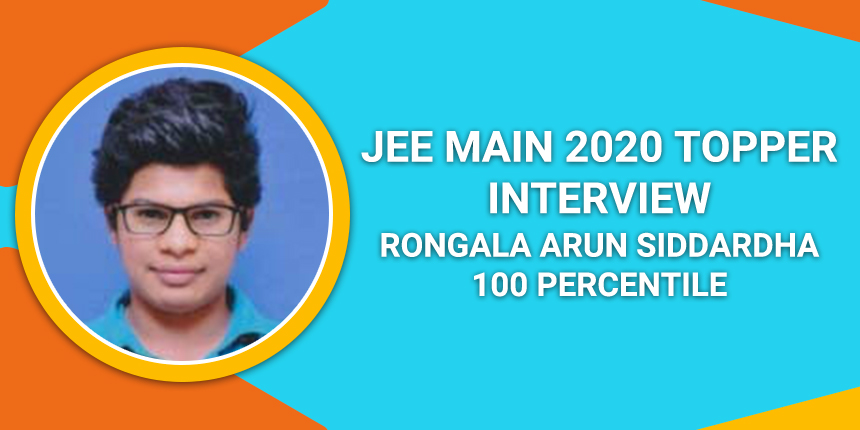 Careers360: Congratulations on your performance in JEE Main 2020! What was your reaction upon knowing your score?

Arun: I have completed my schooling under Telangana State Board. I studied at Sri Chaitanya IIT ACADEMY, Madhapur.

Careers360: What’s your score in Physics, Maths and Chemistry?

Careers360: When did you start your JEE Main preparation? Tell us something about your preparation strategy and daily routine for JEE Main?

Arun: In our campus, they used to prepare us for JEE Advanced. Since December 15, they made us prepare for JEE Mains track i.e concentrating on the extra syllabus portion which are there for mains. I used to prepare daily 13 hours for the JEE and I’m preparing for this exam for 2 years rigorously.

Careers360: Did you face any difficulties since the examination was conducted completely in computer-based mode?

Arun: No, not at all. Actually, my campus used to conduct Computer Based Test to help me get used to it.

Careers360: Was there a difference in the preparation strategy in the last months of JEE Main considering that the board exams are also coming up? How did you manage preparation for both?

Arun: No, I did not face any such problem. Actually, I study in Telangana State Board where the exam will commence from March 4.

Careers360: Did you take coaching for JEE Main and if yes from where? What are the benefits of coaching according to you?

Arun: Yes, I took coaching from Sri Chaitanya IIT academy, Madhapur. According to me, there are a lot of benefits of taking coaching. My campus gave me the study material which is sufficient for my jee preparation. Also, my mentors used to assign me daily work. So that is very helpful for my preparation in JEE Mains.

Careers360: JEE Main sample papers and mock test – how extensively did you practise with the help of these? Do you think practising from the previous year papers help and how?

Arun: Yes, they were very helpful in my preparation for jee Mains. I used to daily practice one previous paper. This helped me get the idea of difficulty level of JEE mains paper, such as question framing and the role of calculation in the paper. All of these are very important for preparation.

Careers360: Are there any special books that you feel have helped with your JEE Main preparation? Are the school textbooks adequate for preparing for JEE Main and Class XII?

Arun: I didn’t follow any particular book for my preparation. My academy provided me with enough material to practise. One book that I followed was NCERT which is very very important in the preparation for any competitive exam in INDIA.

Arun: When the exam commenced, I was a little tensed but the paper was easy. So, I gained confidence in the middle of the exam. This helped me do all the questions. I think my shift paper was easy and all I needed was mental balance and time management.

Careers360: What do you think are the key factors behind your stupendous success in JEE Main?

Arun: For me, the key factor was confidence that I gained during the examination. Another key factor is my mentors who supported me in my academy. Time management, mental balance are some other factors.

Careers360: Will you be appearing for the April session of JEE Main 2020 too?

Arun: Yes! I will be appearing in the JEE Main April exam also.

Arun: I used to get distressed by sleeping, taking naps. I used to do this in after every three hours. My hobby includes reading some inspirational books.

Arun: Sundar Pichai is my ideal inspiration because he originally belonged to a middle-class family. He became CEO of Google and I want to be like him in my life

Careers360: You know you are an inspiration to thousands of students across the country. Do you have any message for future aspirants on tackling the JEE Main exam?

Arun: I would say, just learn how to manage things, have patience, and maintain mental balance. Also, time management is the key factor in time-bound exams.

my ews certificate is being prepared but because of lockdown it is being delayed what else i can submit alternate to it rather to complete my jee advanced registration?

On account of Covid19 pendemic everything has gone out of order and delayed.

If you are registering for JEE Advanced then to get the reservation benefits you will have to submit the valid certificate for the same. In case you don't have the certificate due to some unavoidable reasons then you don't need to worry. You can download a declaration available on IIT website and declare that you don't have the EWS certificate right now but you will produce it soon before the specified date. It has to be signed by you and your guardian.

In case if you failed to produce the certificate then your reservation benefit is liable to be cancelled and you will be treated as General category. Here you must note that if you haven't crossed general cutoff in JEE Main then you would not be able to write JEE Advanced.

Hope it helps you. All the best for JEE Advanced.

Will JEE Main get postponed further ? What is the possibility ?

The first session of JEE Main in January was successfully conducted and the result was also released. On account of Covid19 pendemic the second JEE Main examination which was to be conducted in April was postponed and delayed. Now it is scheduled to be conducted from September 1 to 6.

As of now there has not been any official news regarding further postponement or cancellation. Moreover, two PIL has been filed in Supreme court from two parents side. One side is demanding that the candidates should not be risked and hence JEE Main should be cancelled because the coronavirus cases are still increasing at an alarming rate. On the other hand the other side is requesting MHRD to conduct it on scheduled time by making suitable arrangements so that the study of students cannot suffer. Let us see what supreme court decides.

Is ncert exemplar maths class 12 and 11 good for jee mains and boards?

Hello.
since it is quite difficult to predict the marks to score a particular percentile because the percentile depends upon the number of candidate appeared for the exam and also the topper percentile actually it is your normalise score which is calculated with respect to the number of students who got equal to and less than your marks so to get 98 percentile you can consider marks that you need to score is  more than equal to 90% of the total marks of that particular area of the exam.
Best of luck.
Read More
Answer

i got 93.75 percentile in jee mains january 2020 i belong to general quota, is there any chances for me, getting admission into any of the NITs

Based on  your percentile, Your Predicted All India Rank is in between 58000-65000. As per your rank and previous year cutoff, the colleges you will get as per your rank in 6th or 7th round of counselling are:-

Madhav Institute of Technology and Science

NIT Closing rank genrally occurs at 45000. After that seats are full in NITs. So, as per cutoff last year only NIT Goa closing rank goes till 59000. If it goes this year also, you have chance to get a seat.

To know more about your chances of getting other colleges check out the college predictor link below: