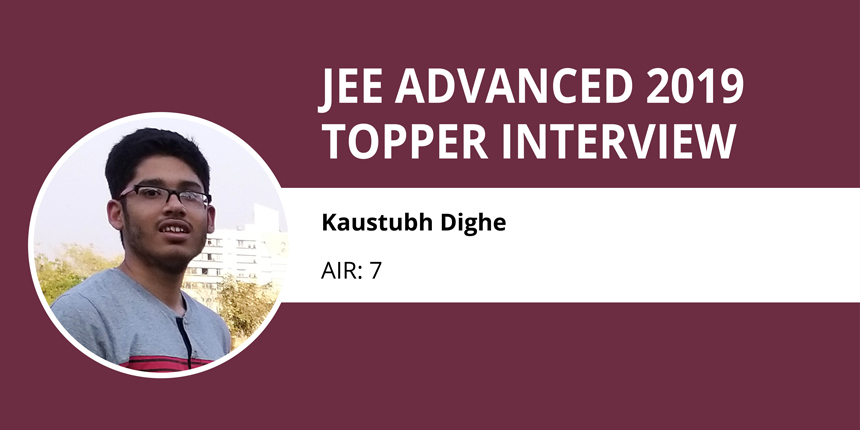 Careers360: Congratulations for your outstanding performance in JEE Advanced 2019. What was your reaction upon knowing your rank?

Kaustubh Dighe: I was expecting a good result after calculating estimated marks from answer key though I was not sure of the rank. So I was extremely happy and satisfied when I came to know that I have secured AIR 7.

Careers360: Tell us something about yourself. Which board have you studied under? Which school did you studied in?

Kaustubh Dighe: I have studied in CBSE Board all through my school. I was initially a student of Kendriya Vidyalaya-ONGC, Surat (Gujarat) and later shifted to Kota in class 11 where I studied in DDPS which is also a CBSE School.

Careers360: What is your score in JEE Advanced 2019? What is your all India rank and category rank? What was your JEE Main rank and marks?

Kaustubh Dighe: My total score in JEE Advanced was 324 with an All India Rank 7. I belong to General Category and so my category rank is same. My JEE Main Rank is 55 with a percentile 99.998.

Careers360: As you have performed exceptionally well in both JEE Advanced and TS Kaustubh Dighe: EAMCET, which institutes are you targeting for admissions and why?

Kaustubh Dighe: I have taken admission in IIT Bombay, is the most prestigious technological institute of the country.

Kaustubh Dighe: I want to study engineering as it opens multiple avenues for a career in Academics as well as Industry. Going by current technology scenario, I have taken admission in Computer Science and Engineering Branch.

Careers360: JEE Advanced was conducted as a computer-based test. What is your opinion about it? What preparation strategy did you adapt for the computer-based exam?

Kaustubh Dighe: This is a good step and should be continued. I practiced solving computer-based tests of a similar pattern to adapt myself to this test mode.

Kaustubh Dighe: I started it right from the beginning of class 11 and continued till the exam. My daily routine was attending classes for 4 hours a day and following it up at home through revision and solving practice test papers for another 4 hours or so.

Careers360: How was the preparation for JEE Advanced different from JEE Main and TS EAMCET?

Kaustubh Dighe: JEE Advanced pattern is more complex as compared to JEE Mains which is largely NCERT based. Also, there are a few topics which differ in the syllabus of these two exams. My preparation was accordingly as per the syllabus and as per depth of the study required for these two exams.

Kaustubh Dighe: I had appeared only in the first phase of JEE Main conducted in Jan 2019 and did not appear in the 2nd phase in April 2019.

Kaustubh Dighe:I took coaching from a Kota based institute. It helps in compiling the study material from various resources and making it available through a single platform.

Kaustubh Dighe: Regular Mock tests and sample papers were a regular feature in my preparation. Past years papers help in making you aware of the actual pattern.

Kaustubh Dighe: It was largely the compiled study material collected by my teachers from various sources, which helped me.

Kaustubh Dighe: I did not face any particular problem as such except that some questions did not click to me. I found Chemistry to be more troublesome than the other two sections.

Kaustubh Dighe: I feel that Complexity wise there wasn’t much difference.

Kaustubh Dighe: I did not face any such problems at my exam centre. It was nicely conducted.

Kaustubh Dighe: Regular practice without any break at any stage was the key which helped me achieve this.

Kaustubh Dighe: I like drawing though I could not find much time for it during these two years. I used to walk sometimes for relieving stress.

Kaustubh Dighe: Sundar Pichai as he has achieved great heights with his own efforts.

Careers360: You know you are an inspiration to thousands of students across the country. Do Kaustubh Dighe: you have any message for future aspirants on tackling the JEE Advanced exam?

Kaustubh Dighe: I would like to advise them that they should stay focused on this target without getting deviated by trivial issues. Regular practice and daily follow up of the topics taught in class keeps one maintained on track. I wish them all the best for their future.