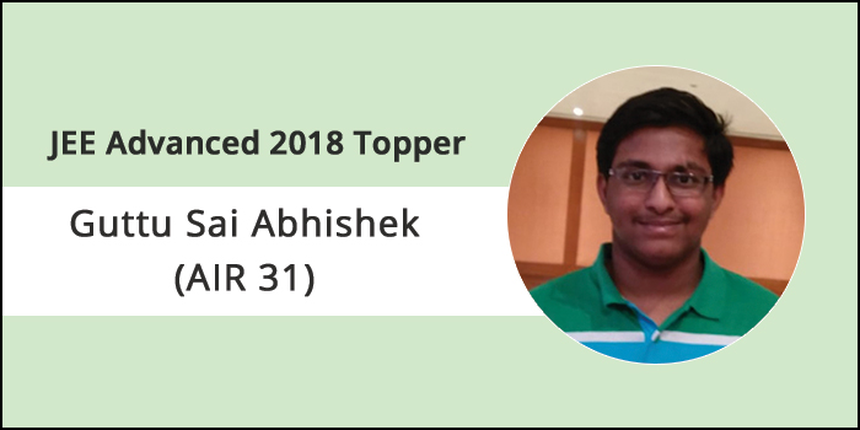 JEE Advanced 2018 topper interview- Guttu Sai Abhishek (AIR 31) - Guttu Sai Abhishek who secured 296 marks in JEE Advanced 2018 is on the cloud nine after coming in the list of toppers.  The results brought in such a high measure of happiness considering that he is one of the topper of JEE Advanced 2018 securing AIR 31 in open category and AIR 5 as OBC rank. Guttu interacted with Careers360 about his success, his strategy to prepare for the entrance exam, his future goals etc. Currently seeking admission in IIT’s in Computer Science branch, Guttu attributes his success to his sheer determination and focus towards his goal. He believes that exams are just one of the ways for succeeding in life, one should not lose their peace clam behind them. Read his full interview to know more about JEE Advanced 2018 topper, Guttu Sai Abhishek journey:

Latest : Boost your Preparation with Personalised Coaching, Unlimited Mock Test and Faculty Support. If you Do Not Qualify- Get 100% MONEY BACK. Know More

Careers360- Congratulations for your outstanding performance in JEE Advanced 2018! What was your reaction upon knowing your rank?

Guttu Sai Abhishek- It was awesome. I am excited with the rank I secured for my 3 year effort that I put in.

Crack JEE 2020 with JEE Knockout Program, If you Do Not Qualify- Get 100% MONEY BACK

Guttu Sai Abhishek- I belong to Vizianagaram, a district of Andhra Pradesh. My 12th board was completed under TSBIE and I scored a total of 987 out of 1000. I studied in Sri Chaitanya Techno School in Vizianagaram.

Guttu Sai Abhishek- I am interested in computer science as I want to create a software which can think as a human being with help of Artificial Intelligence (AI).

Careers360- JEE Advanced went online this year. What is your opinion about it? Did it change your preparation strategy for the exam?

Guttu Sai Abhishek- According to me it won't effect much. The time which we should allot for bubbling the ORS sheet is same when it comes to scroll the page, look up at the screen for questions and down for solving it.

Careers360- When did you start your JEE Advanced preparation? Tell us something about your preparation strategy and daily routine?

Guttu Sai Abhishek-  I started my JEE preparation from 10th class itself. My routine was, wake up early, sit to study for at least two hours continuously and sleep early in night. On average I use to study for 12 hours in a day.

Careers360- How was the preparation for JEE Advanced different from JEE Main?

Careers360- Since there was just a month after the JEE Main, elaborate on your preparation strategy?

Guttu Sai Abhishek- I practiced past year and other JEE Advanced question papers almost every day in that period.

Careers360- Did you take coaching for JEE and if yes from where? What are the benefits of coaching according to you?’

Guttu Sai Abhishek- Yes, I took coaching from Chaina Institute, Hyderabad. It helped me to have good set of problems for JEE preparation.

Careers360- Mock tests and sample papers – how extensively did you practise with the help of these? Do you think practising from the previous year papers help and how?

Guttu Sai Abhishek- Yes, solving previous papers would definitely help. It teaches time management. Practising mock tests will prepare us to write JEE Advanced in casual mood such that it won't be a big challenge at last minute.

Careers360- Are there any special books that you feel have helped with your JEE Advanced preparation?

Careers360- What do you think are the key factors behind your stupendous success in JEE Advanced?

Careers360- How did you de-stress yourself during the preparation? What are your hobbies? How often could you pursue them?

Guttu Sai Abhishek- Involving in a discussion with friends would de-stress me, it may be academic or may not be.

Careers360- Who is your ideal or biggest inspiration in life and why?

Jee Advanced is a consequential exam if a candidate clears JEE Mains. The registrations for the same will be happening in the month of May. This exam is used to test students who wish to do Bachelors in Engineering or Technology. It even involves courses which have integrated Masters, and Dual Degrees. This the second stage and therefore the students who qualify JEE Mains are able to give it. It is conducted by 7 IITs. This time the conducting body is IIT Delhi. It is a 3 hour paper which is computer based and it is conducted in both Hindi and English languages. It is your ticket for admission into 23 IITs making it one of the most desiring exams to take and pass when it comes to aspiring engineering candidates. The official website is https://jeeadv.ac.in


Here is how to prepare:

For this go through the previous year question papers and mock tests and plan your time-table according to strengths and weaknesses in the various subjects. Make a combination of relaxation and preparation. Solve question papers to track your progress.https://engineering.careers360.com/articles/jee-advanced-mock-test https://engineering.careers360.com/articles/jee-advanced-question-papers

For mathematics, go the old-fashioned way. You can try shortcuts for certain things but practice, Practice and practice. Memorise tables, square roots, cube roots, conversion from percent to fraction, etc. Reducing time for this section is important.

Assess through your JEE Main score. Check where you lost marks and what were your strong points. Make a list where you can divide topics according to their strengths and weaknesses.

Devote maximum time to your studies.

If you have amazing scores in your Mains, you can go for books like Irodov.

Create a strategy to be able to write a 6 hour exam.

Try to understand the problem give in the exam well. Be sure of what the question means before answering.

Other than that, eat well and take care of your health. Know that you can ace it and if you have the right preparation, you surely will.

Hope this helps. All the best!

Hey there hope you're doing well
Dear aspirant, congratulation on scoring a good percentile in the JEE MAIN examination. According to your percentile score in JEE MAIN your expected rank is about 30,415. With this rank you're likely to get into NITs. But it's good as you want to improve in your percentile and rank. As far as preparation is concerned since you have secured a decent rank in JEE MAIN a little effort would take you under 10k rank. For JEE ADVANCED you need to focus on analytical questions; problems that require in depth knowledge of subject matter. Joiningof coaching benefits you as they create a good competitive environment. Give full length test series a d practise more no. Of questions. Also absolve previous year JEE MAIN + ADVANCED problems.
Thank you hope this helps you!
Read More
Answer
Answer Later
Report
21 Views

Hello.
It is quite difficult to tell you the latest cutoff percentile to be qualified JEE mains for JEE advanced but yes by analysing the previous year records I can tell you that how much percentile probably you basically need to have, So for general category you need to have at least 85 percentile.
And remember the above percentile is on the basis of previous year record it may fluctuate with some factors.
Best of luck.
Read More
Answer
Answer Later
Report
15 Views