After leaving no stone unturned and burning midnight oil, Kalash Gupta has passed JEE Advanced with flying colors and clinched All India Rank 3. He credits his family and coaching institute for his success. According to him, consistency and family support has really helped him to climb the ladder of success. Careers360 interacted with him to find out the reasons behind his tremendous success. Read the full interview of JEE Advanced topper 2018 to know everything about his preparation. 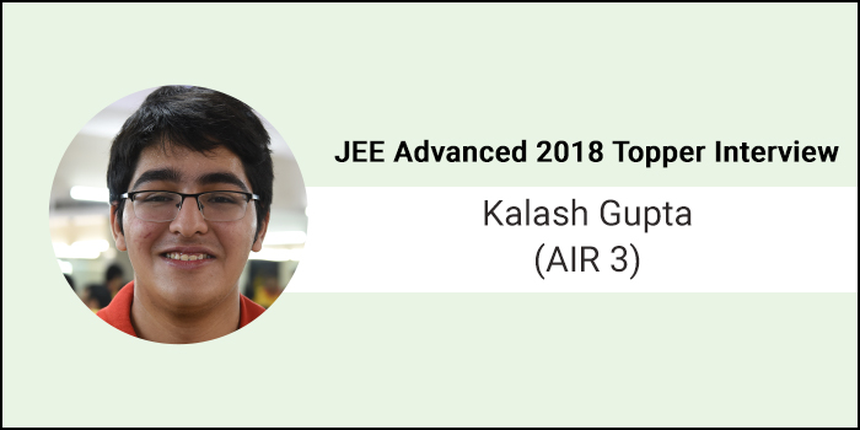 Kalash Gupta: I was actually shocked when I saw my rank. I double checked it actually then happiness settled. It was a wonderful experience.

Kalash Gupta: I pursued computer tech programming from class 10. This was the reason I pursued Engineering. I have an interest in Computer Science. I am planning to go for IIT Delhi or IIT Bombay. I will take CS branch.

Kalash Gupta: It was a different experience but I was comfortable with it. I had problems marking bubbles in the OMR sheet. So it was a better experience. FIITJEE conducted regular AITS(All India Test Series) which were conducted in online mode so we got fairly used to the pattern. Therefore, no other changes were required actually.

Kalash Gupta: I started my preparation mid-way in my eleventh class. Earlier my preparation was not so rigorous.I just completed what was given to me. Later on, I started doing revision side by side. Towards the end I started giving one to two tests everyday.

Kalash Gupta: Actually, I did not specially prepare for JEE Main. The syllabus was covered while preparing for boards and JEE Advanced.

Kalash Gupta: I gave a lot of mock tests. Also, there were some sections in inorganic chemistry that I have not yet covered fully, so I brushed up those parts. That’s what I did during that month.

Kalash Gupta: I took coaching from FIITJEE South Delhi. Yes, coaching proved to be immensely helpful for me. It gave direction to my preparation and helped identify areas I needed to work on. The institute conducted regular tests. All India Tests conducted by them gave an idea of where I stood at National level.

Kalash Gupta: Yes, I practiced from previous years’ papers. I completed the archive of old JEE questions and regularly practiced the tests given by FIITJEE. Most of them were based on JEE Advanced exam pattern and the questions were quite relevant.

Kalash Gupta: No, not really. I did not study from any specific book other than the study material provided by my coaching.

Kalash Gupta: My Maths paper did not go well. Maths was the toughest subject for me and I found Physics to be the easiest. I like Physics.

Kalash Gupta: No, I did not face any technical glitches. As I said I had a problem with marking bubbles on the OMR sheet, so I was comfortable with the online mode.

Careers360: What is the main difference between the two papers in JEE Advanced?

Kalash Gupta: Consistent preparation and family support have really pushed me so far. I would also like to give credit to the FIITJEE. The faculty, apart from teaching has put in so much efforts that I have been able to believe in myself and work hard for this.

Kalash Gupta: I like programming. I played chess. I even played football when I went to school. It was a real stress buster and I watched stand up comedy clips.

Kalash Gupta: My family is my biggest inspiration. They have been a constant support through out the journey.

Kalash Gupta: Even if the going gets tough, the trick is to not get demotivated. It is because demotivation can derail the preparation process. I want to wish all the future aspirants good luck and All the best.

The minimum ranks required by the candidates to increase the c...

4 days ago
Read More
View All News and Articles

Dear student,
Since you have filled your category as a general candidate therefore you will be considered a general student and you need to score marks in jee mains according to the general cut off to qualify for jee advanced. According to the previous year cut off a general candidate had to score at least 81 percentile to qualify jee mains and be eligible for jee advanced, however it was 49 for OBC-NCL, 32 for SC, 27 for ST, and 1 for PWD for the year 2020. Although the cut off may vary from year to year as it depends on various parameters like number of students attempting the examination, difficulty of paper, etc.
Read More
Answer

For appearing in criteria in jee 2021 it doesn't see that whether you have gap between your 10th and 12th std.

Recently, education minister has waived off the 75% criteria for this year also.

For more information check out this link-

how to pass this exam perfectly ?

hey need to because JEE Advanced demands an in-depth knowledge of concepts and their application. It is not just about putting in the hours, but equally about using smart ways to maximize the time left at one’s disposal. It is the performance in Physics, Chemistry and Mathematics that hold the key to cracking JEE Advanced . Also, the candidate must not waste time in preparing for topics that are not included in JEE Advanced syllabus. To give you an example, Electronic Devices and Electromagnetic Waves which were part of JEE Main syllabus are not included in JEE Advanced syllabus .

For detailed preparation tips use this link:

Yes of course you can do do, you can take a drop after passing class 12th and can prepare for JEE-Main as well as Advance but before taking drop you should know some facts, so let us discuss those facts.

For complete details of JEE-Main eligibility criteria kindly check out the link given below :-

I am enlisting down some preparation tips for JEE-Main which would help you in your preparation :-

For more detailed preparation tips for JEE-Main 2022 kindly check out the link given below :-