March 16 was a startling day in a good way for Mycharla Ganesh who secured an AIR 14 in GATE 2018 Mechanical Engineering which is his second attempt at the exam. Ganesh, the shy boy as he defines himself shares his GATE 2018 preparation and success journey with Careers360. GATE 2018 was more important for him as he was determined to crack the exam with a very good score and make his parents proud. His outstanding rank in GATE this year has now made him closer to his dreams of working in PSU's. Ganesh is truly an example of not giving up no matter what. He believes that maintaining consistency and determination is the key to his success in GATE. 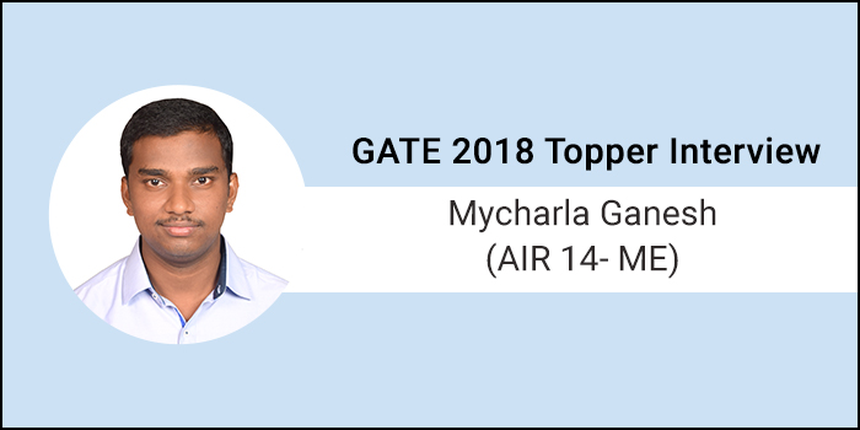 [Want to Know Which Colleges, Specialization and PSUs to Apply on the basis of your GATE 2018 Scores? Click here]

Read the excerpts of an exclusive interview of Mycharla Ganesh, AIR-14, ME, GATE 2018 Topper with Careers360 below.

Ganesh: I have done my graduation in Mechanical Engineering from MVGR College of Engineering. I belong to Visakhapatnam.

Ganesh: No, this is not my first attempt. I appeared in GATE 2017 too.

Ganesh: I worked very hard last year for GATE but I wasn't satisfied with my result so I decided to appear in the exam. I am interested in PSU recruitment through GATE.

Ganesh: Yes, I have applied for various PSUs and I'm looking forward to get through in Vizag Steel Plant and HPCL.

Careers360: When did you start your preparation? How did you prepare for the GATE exam ? How many hours did you put in per day as per the stage of preparation?

Ganesh: I started my preparation for GATE 3 years back. I used to study for more than 10 hours in a day.

Ganesh: I have taken coaching from Ace Academy, Vizag. I will have to admit it played a major role in my preparation.

Ganesh: As shared earlier, I used to study for more than 10 hours in a day. I have been consistent with this schedule of mine from the start till the end. However, three days prior to the exam, I left this schedule to avoid stress and anxiety.

Ganesh: I think taking up mock tests is important because they make us understand our time management skills and also let us know our level of understanding of the concepts. Mock tests help us to create an exam like scenario to be more serious in our preparation.

Careers360: Which books did you follow for GATE preparation? Pls name some very important must read books for GATE.

Ganesh: I studied from all the reference materials like McGraw-hill editions and also from coaching center notes and materials. They were more than enough for building concepts.

Careers360: Which are the topics one should focus more on? Kindly give us some details.

Ganesh: All topics should be given equal importance. The reason is that you can’t expect to predict the weightage of the topics just like that. It may also be not so beneficial as compared to covering the complete syllabus. I would also like to stress that while the subject is important, one should not neglect Maths and Verbal Ability sections. They are highly scoring.

Ganesh: I think the toughest aspect in anyone's preparation including mine is to be consistent in the determination to succeed. That alone should drive you to do your best.

Ganesh: Basic thermodynamics and basic design Engineering and fundamentals of Engineering mathematics are basic concepts which are very scoring. See, these may not have direct questions. However, they are needed to answer the others.

Ganesh: I used to listen music and go for walks to relax myself during my preparation days.

Ganesh: There was no specific strategy as such but I would suggest to answer the aptitude section first, followed by technical questions of 1 mark and then 2 marks. I would also suggest to use the time wisely and not answer lengthy questions at the end.

Careers360: What did you feel was a tough thing for you during the GATE exam?

Ganesh: I think the tough thing which I felt was not to underestimate the difficulty level of the paper and possibility of us making mistakes.

Ganesh: Yeah, I would suggest be focused and determined, believe in yourself and try and be consistent.

How to prepare for GATE Metallurgy Engineering

How to prepare for GATE Metallurgy Engineering - Candidates pr...

Get the links to download GATE Chemistry previous year questio...

Hello,
GATE is conducted every year for admission into M.E./M.Tech/PhD at the IITs, NITS, IIITs and CFTIs or recruitment to PSUs. GATE exam is of 3 hours comprising of 65 questions with total of 100 marks.
There will be two types of questions
Multiple Choice Questions (MCQ)
Numerical Answer Type (NAT) Questions

Please visit this link to get the syllabus for GATE 2021 according to your subject.
https://www.google.com/url?sa=t&source=web&rct=j&url=https://engineering.careers360.com/articles/gate-syllabus/amp&ved=2ahUKEwiPmOet5rPqAhU4wzgGHS4tBqcQFjADegQIAxAB&usg=AOvVaw1I0K3lgGG4PUPsKLwz9bSf&ampcf=1
Also visit this link to download previous year question papers of GATE according to your subject https://www.google.com/amp/s/engineering.careers360.com/articles/gate-question-papers/amp

can i get mhrd scholarship through mtech in vit under gate

Hello,
Candidates with a valid GATE score will be able to avail the AICTE GATE scholarship. The scholarship is of Rs 12400 per month. The duration of the AICTE GATE 2020 scholarship will be 24 months or the duration of the course, whichever is lower.
The candidates will be required to undertake 8 to 10 hours (per week) of work related to teaching and research activities as assigned to him / her by the Institute which could include tutorials, laboratory classes, development and maintenance of la boratories, assistance in research and development activities undertaken by faculty members, maintenance and operation of Computers and other central facilities, assistance in library, etc.

For more details about the GATE scholarship please visit this link https://www.google.com/amp/s/engineering.careers360.com/articles/aicte-gate-scholarship/amp
Apart from that VIT provides a monthly stipend of Rs 4000 for top six GATE scores in each M.Tech program.
Hope it helps
Read More
Answer

Hi sir/madam Right now i am pursuing 3rd year of ECE, should i appear for the GATE 2021 or i shall appear after my graduation is completed (By Aug 2021)

I will definitely insist you to appear for GATE 2021 before completing your graduation because it will help you gain a first hand experience on the type and difficulty level of questions. Thus, it will give you a good mock experience and you will get a chance to work on the loopholes in your exam strategy and focus on your mistakes.

tell me a gate syllabus for electrical engineer.

what is the subject wise weightage for gate electrical engineering

the expected weightage of electrical engineering for GATE is as follows