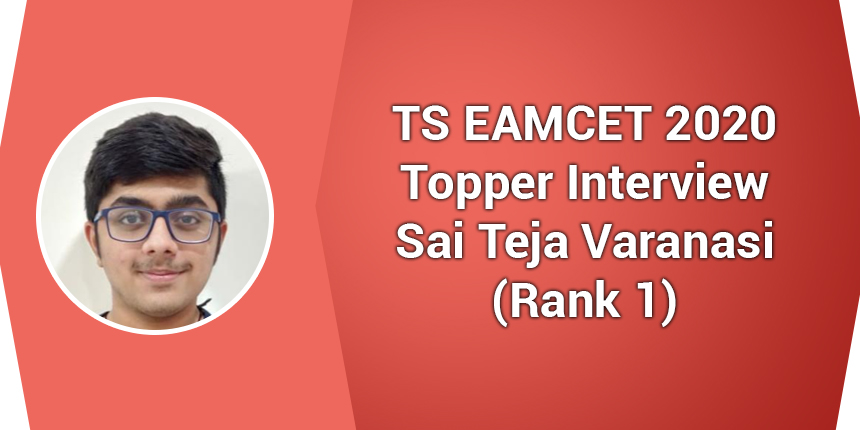 Careers360: Congratulations for your performance in TS EAMCET 2020! What was your reaction upon knowing your score?

Sai Teja: I was shocked. I knew that my exam had been good but I was not expecting the first rank. I actually got to know my rank through television since I had not checked my result.

Sai Teja: I studied in Narayana from 8th grade. My preparation was focused on JEE Advanced and TS EAMCET was a part of it. I mostly checked past year papers two or three days before the exam to prepare for the TS EAMCET 2020.

Sai Teja: After normalization, my score was 147.2.

Careers360: Did you appear for the AP EAMCET 2020 also? What was your score then?

Sai Teja: I just simply like engineering. I was always good at Olympiads. At first, I wanted to be a scientist but then I discovered my love for computers. So now I want to pursue B.Tech in Computer Science.

Careers360: When did you start your TS EAMCET preparation? Tell us something about your preparation strategy and daily routine for TS EAMCET?

Sai Teja: My main focus to be honest was JEE Advanced 2020. I started my preparation for it from 9th standard. I knew TS would have tough maths questions. I practiced a lot of coordinate geometry which would be lengthy. I studied 9-10 hours every day.

Careers360: Did you face any difficulties since the examination was conducted completely in computer based mode?

Sai Teja: No. I did not face any problems. I was prepared for computer based examinations through Narayana.

Careers360: How did the pandemic affect your preparation for the exam?

Sai Teja: I was more ready for the exams before the pandemic. I had to maintain the flow and that was a bit hard. It was boring too. I thought it would have been better if the exams had been conducted as usual but that was of course not possible. My teachers also helped me a lot to maintain my study flow. They constantly called me and guided me.

Careers360: Was there a difference in the preparation strategy in the last months of TS EAMCET considering that the JEE Advanced were also there? How did you manage preparation?

Sai Teja: JEE Advanced preparation is more accuracy based. It needs more IQ. TS EAMCET needs more speed and practice. JEE Advanced does not require that. Time management was a problem initially in TS EAMCET. I had to progress faster and in flow during the exam.

Careers360: Did you take coaching for TS EAMCET and if yes from where? What are the benefits of coaching according to you?

Sai Teja: Coaching helped me to create the exam mode. You get the feel of writing the exam through coaching since other students will also be there competing with you. Mocks in coaching really helped me in the examination. I got good teachers so I benefited from coaching a lot.

Sai Teja: At first, I used to solve TS EAMCET 2020 mock test and sample papers once a week. When the exam dates got near, it changed to once in a day or once in two days. We used to get back all of the mistakes we made in the mock tests and we used to work on it. If we didn’t understand anything we contacted our teachers and they helped us a lot.

Careers360: Are there any special books that you feel have helped with your TS EAMCET preparation? Are the school text books adequate for preparing for TS EAMCET and Class XII?

Sai Teja: I referred to standard books in Chemistry. NCERT is a must and the first thing I completed. I studied from Atkins for Chemistry. For Maths and Physics, I used to learn from teachers and practice a lot since NCERT is not enough.

Sai Teja: Maths is always a problem since it is difficult. Managing time for Maths in TS EAMCET was hard and a concern. I tried to maximize the score in Maths so I didn’t leave any questions for last. It has happened to some students, you leave the questions for last and you lose out on all of the marks. I tried to maintain the flow and speed. It was not a major problem but it was there. Maths was the toughest and lengthiest. Physics and Chemistry comparatively is a cup of tea if studied properly.

In AP EAMCET, Physics was the most difficult subject. Maths and Chemistry were easy. Physics had more calculations.

Careers360: What do you think are the key factors behind your stupendous success in TS EAMCET?

Sai Teja: My practice of speed and accuracy were the prime reasons for my success in TS EAMCET. To build that, I constantly worked on mock tests. The zeal for success and concentration were also factors which affected my success. After one or two months of lockdown, I became a bit down and I didn’t want to do it. I constantly boosted myself and got my form up.

Sai Teja: I listened to music of all languages, even if I didn’t understand it, and played table tennis and cricket.

Sai Teja: I don’t have any ideal or inspiration. I just wanted to be the best version of myself.

Careers360: You know you are an inspiration to thousands of students across the country. Do you have any message for future aspirants on tackling the TS EAMCET exam?

Sai Teja: Practice and accuracy are important factors. Only if you have the urge for success then you can achieve it. Otherwise it will not be efficient to work on it.

How many I should score in Ts eamcet to get seat in CSE branch in Osmania University? As per previous years cut-off..!

As far as ts EAMCET is concerned every year the number of students and the quality of students varies so it can't be predicted accurately for which a student shoud score to get cse branch in Osmania University.

But as per previous years, the cut off for cse branch was high and you have to be under 500 rank to be on a safer side. As the paper consists of 160 questions and the total marks is 160 so as per my view you need to score atleast above 100 to get a decent rank.

For more information regarding the exam patter , syllabus check out this link-

if i get seat in private college by getting rank in EAMCET, then also they take fee or not? if they take how much should I pay to them per year?

EAMCET exam is only for qualifying to enter colleges.