My PSU Interview Experiences – Revanth Dongre who scored an All India rank of 70 in Chemical Engineering in GATE shares his PSU interview experiences with GATE aspirants on this page. Speaking to Careers360, Revanth who has chosen to join ONGC talks about his preparation for the PSU Interviews, questions asked by the panelists in the PSU interview, his firsthand account of each interview he as appeared for. A chemical engineering from IIT Madras, Revanth appeared for GATE to join a good PSU and build a successful career in his chosen field. In addition to his experiences, he also cautions about some hiccups he faced during the PSU Interviews, some dos and don’ts for all PSU aspirants. Future GATE aspirants can read the interview to get an inkling of the preparation they may have to undertake for PSU recruitment if they qualify in GATE. 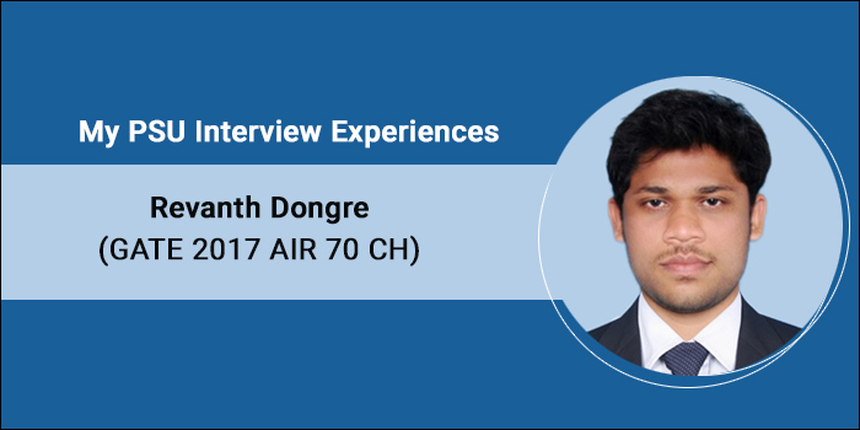 Revanth Dongre: My name is Revanth Dongre and I belong to Sirpur Kaghaznagar from Telangana. I pursued Chemical Engineering from the Indian Institute of Technology-Madras.

Careers360: What was the GATE Paper you appeared in? What rank did you get in GATE 2017? What is your GATE score and how many marks did you secure out of 100 in GATE paper?

Careers360: Which PSUs did you apply to? Which ones did you get a call to?

Revanth Dongre: The PSUs to which Iapplied are ONGC, HPCL, IOCL and GAIL. I got the interview calls from all of them except GAIL, which is yet to start its recruitment process.

Careers360: Which PSU have you joined in? Any particular reason?

Revanth Dongre: I am yet to join one. I got the selection letters for HPCL and ONGC. However IOCL is yet to announce its results. My personal preference is to join ONGC because it is one of the fortune 500 companies and has a Maharatna status. Since ONGC is an exploration and production company, there will be a lot of opportunity to learn. The salary package and the allowances provided by ONGC are also quite attractive.

Careers360: What are the general GATE cutoff marks for the PSUs you appeared in interviews for?

Revanth Dongre: The GATE cutoff for the PSU’s in which I had appeared for are given in the table.

Careers360: How many candidates were called for the interviews? What are the factors that play a role according to you in the interview calls?

Revanth Dongre: The number of candidates that were called for interview by ONGC was 1:6 while HPCL called the candidates in the ratio of 1:3.

The major factor that is taken into account to get the interview calls for the IOCL and the ONGC is your GATE score.

Careers360: How did you prepare for the PSU interviews? Any factors one needs to keep in mind like knowing about the company and such things?

Revanth Dongre: Once I cleared the GATE exam with a good rank, I focussed on preparing for the technical questions. At the same time, I kept myself abreast of the current affairs and tried my best to ensure that I do not miss much. I also made some short notes for the technical questions and also prepared answers for some standard HR questions. I studied comprehensively about the company because you need to be aware of the company you are working for as well as be able to answer any questions if the panel asks you.

When I say well versed about the company I mean that one should know about the operating sites, capacity, revenue, turnover as well as about the ongoing projects. It is advantageous to also know the names of the top management and other key persons of the company.

Careers360: How did they start the interview – apart from personal introductions? How long was the interview?

The HPCL interview lasted for around 45 minutes. In the HPCL interview, the questions were mostly related to HR as they were asking me about my family background apart from the standard HR questions.

At IOCL, they focused more on asking technical questions. They also enquired about my family background. The interview lasted for 20 minutes.

Careers360: What was your experience at the PSU interview? What kinds of questions were asked? Core subjects questions, Current Affairs G.K etc? Please specify.

Revanth Dongre: The different type of questions that were asked by the interview panelists of different PSUs are given below.

Careers360: At any point of time, did you feel confused about any questions or was any part of the interview tough? In what way?

Revanth Dongre: My confusion was for two questions

1. Which company would I join if I get placed both in ONGC and HPCL – this was a personal dilemma and tricky to answer as well.

Q. What would be the work for a chemical engineer in a refinery - This was asked in HPCL. I was a bit confused. However I do know now that one can get placed in the process, planning, pipeline and downstream operations.

Careers360: Did you participate in any group discussion during the PSU recruitment? If yes, How was the experience? What kind of topics should one expect? Any tips.

Some of the topics of group discussion commonly asked are

There is a need to focus on the current as well as general topics for group discussion.

Remember that speaking eloquently in English is not the criteria to judge the person in group discussions. Candidates are evaluated for their communication skills, leadership qualities, whether they are team player or not. It is advisable to give your best and express your views.

Careers360: Were the PSU Interviews easy or tough? Any tips on what not to do for the interviews?

Revanth Dongre: The interview for PSUS recruiting through GATE was neither too difficult nor too easy. However, there are certain do’s and dont’s, which may be kept in mind.

The interview panel is basically testing you on how you behave in stressful situations and how convincing you are. You are not expected to answer all the questions. So accept gracefully if you do not know the answer to any question.

Careers360: Any other important tips to GATE aspirants who wish to join PSUs?

Revanth Dongre: Draw a proper time table and adhere to it. I would suggest that you start preparing for the interview with the subject/Topics in which you are comfortable in as it will boost your confidence. After that, focus on the difficult topics or the ones which you find boring.

Visualise your dreams. Try to use your leisure time effectively and at the same time keep an eye on your goal. Spend time with people who boost your confidence and morale. Identify your weak areas and convert them into your strengths.

It is not easy to achieve all your goals but hard work definitely pays off. Do not lose confidence and keep trying till you achieve your goal.

Important things to focus while preparing for the PSU recruitment interview:

Lastly be confident. All the very Best to GATE 2018 aspirants!

Stay tuned to engineering.careers360.com for more news and information on GATE 2017.

GATE 2022 Exam Dates -The authorities has released the GATE ad...

GATE 2022 Paper Analysis by Made Easy

GATE 2022 Paper Analysis by Made Easy - The subject-expects wi...

17 hours ago
Read More
View All News and Articles

can I do Mtech after completing bsc computer science or BBA through Gate 2022 examination ?

eligibility qualifications for GATE: BE / B.Tech/ B.Pharm
Bachelor’s degree holders in Engineering/ Technology (4 years after 10+2 or 3 years after B.Sc/ Diploma in Engineering/Technology) and those who are in the final year of such programs.and, for Mtech also you have to clear Btech.

Hope you are doing well!

Yes, you can give Gate exam if you are an integrated MCA student. According to eligibility criteria of Gate exam If:

You can also visit this link for more information:

All the best for your future.

Saniya choudhary 24th Jan, 2022
Can you plz send me a list which have AIR and Category rank of sc in neet 2020 in reply...
Read More
Answer

What is the use of appearing in GATE after Bsc,if he has no chance to enter IIT to do M tech. even though qualified in GATE since IIT requires atleast 4 year degree course? PSU is also not good after Bsc with GATE. Im doing Bsc IT. So Im confused it will be useful or not to give GATE exam for me.

If you are a BSc student of 3 years course, then giving GATE in your BSc isn't at all beneficial for you. You should give this examination while you are in your MSc. Now if you are studying BSc (Hons) or BSc (General) then you can give the IIT JAM paper.

IIT JAM organizes the examination for the subjects:

To know more about IIT JAM visit the link below:

Im Bsc IT student, i.e. I am having 3 year degree course. So, If Im qualified in GATE or have maintained required GATE score for IIT. Am I eligible for M tech Admission in IIT? Or GATE qualified Bsc students are only eligible for PSUs?

Hope you are doing great,

As you want to know the eligibility criteria for the PSU. You cannot get a job in PSU just by qualifying GATE. You need to clear the cut off set up by the PSU to receive an interview call. You have to do well in the interview.

For information about the PSU recruitment through GATE:

For the eligibility criteria for admission in MTech from IIT. A master's degree in the relevant subject or a bachelor's degree in engineering or science (4 year program) or a master's degree in sciences or in an allied field of HSS with marks/CPI not below the specified minimum. The candidate either must have a valid GATE score or must have qualified JRF/NET.

For the eligibility criteria of Mtech from IIT:

I hope this will help you,