Having a good rank in GATE is only half the job done if you are looking for a job at any of top PSUs. It is because most PSU in addition to GATE scores, also conduct interviews for shortlisted candidates. And it is frequently those candidates who perform well in the interview that end up with job offers. But is facing a PSU interview a walk in the park? If you ask Aashish Aggarwal, the AIR 16 in Mechanical Engineering, facing a PSU interview can be tricky. For example, he says it is not uncommon to lose one’s bearings under the acute eyes of the interview panel. Aashish said that in his case he fumbled a few times during the PSU interviews while answering questions that otherwise were on his lips. He suggests that in such situations the candidate mustn't panic, and try to remain calm. Or else it could produce a chain reaction and one mistake can lead to another. Aashish also mentioned many other important points in his interview with Careers360 that candidates can take a leaf out of, like the weightage given to interview may vary across PSUs. Keep reading to know what the GATE topper has to say in detail below. 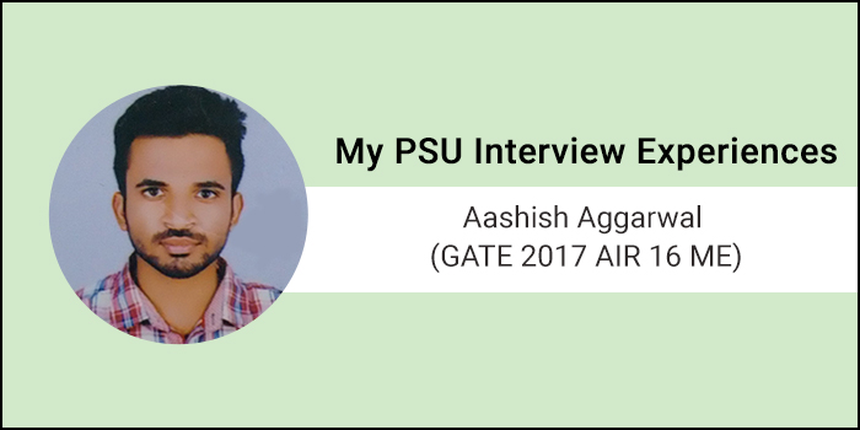 Aashish Aggarwal: I am Aashish Aggarwal, a Mechanical Engineer from NIT Kurukshetra. I appeared for GATE 2017 and secured All India Rank 16 with 90.23 marks in my first attempt.

Careers360: Which PSUs did you apply to? Which ones did you get a call from?

Aashish Aggarwal: Being AIR 16, I got call from all the PSUs that I applied to. Prominent among them were ONGC, IOCL ,BHEL, NTPC, HAL, HPGCL , OIL, and BPCL.

Careers360: Which PSU have you joined in? Any particular reason?

Aashish Aggarwal: I wanted to work for some oil psu due to perks and other benefits. I had Job offers from almost all of them but I settled for IOCL due to best in class perks, job diversity and its presence in all the parts of country.

Careers360: What are the general GATE cutoff marks for the PSUs you appeared in interviews for?

Aashish Aggarwal: For PSUs like BHEL cutoffs are very high 86+ Marks! As for PSUs with more seats like ONGC, IOCL and others, general cutoff is 78+ Marks. These marks may vary because GATE is a relative exam.

Careers360: How many candidates were called for the interviews? What are the factors that play a role according to you in the interview calls?

Aashish Aggarwal: BHEL - top 100 only for the first round

ONGC- 500+ (Including all specializations like Mechanical, Production, Cementing, and Drilling)

For interview calls, the following thing play a major role :-

Careers360: How did you prepare for the PSU interviews? Any factors one needs to keep in mind like knowing about the company and such things?

1. Be confident and well dressed

2. Your basic concepts must be clear

3. Basic info about company and its operations

6. If you don't know an answer to a question that has been asked, don't panic. See if you can find a way out of it.

Careers360: How did they start the interview – apart from personal introductions? How long was the interview?

Aashish Aggarwal: Apart from my personal introduction, I was mostly asked about my family background. Then I was asked to explain project and trainings. After that, they asked me basic  questions about my favorite subjects to test my level of understanding. Interview normally lasted for about 15-20 minutes

Careers360: What was your experience at the PSU interview? What kinds of questions were asked?  Core subjects questions, Current Affairs G.K, etc? Please specify.

Aashish Aggarwal: My PSU interview experience was on a completely different level as compared to on-campus Interview. In campus interviews, I had to prove my knowledge of the curriculum, and current affairs were barely asked. But in PSU interviews, since jobs are mostly managerial, they checked the level of understanding and how clearly I explained things that I already knew as my rank was a clear indication of my knowledge. Questions that were asked were very simple. They just checked how clearly I was able to explain them. In every interview, I was asked about current affairs to check my general awareness.

Careers360: At any point of time, did you feel confused about any questions or was any part of the interview tough? In what way?

Aashish Aggarwal: Yeah, of course! Tell you what, everyone is tensed before an interview and so was I. Sometimes it happened that they asked me the easiest of questions and I knew the answers, but I struggled to give the answer I had in my mind, as words wouldn’t come out as they ideally do. This is common, so one must just remember not to panic in such situations!

Careers360: Did you participate in any group discussion during the PSU recruitment? If yes, how was the experience? What kind of topics should one expect? Any tips

Aashish Aggarwal: Yeah! GD is an elimination round in BPCL and it carries 2.5 % weightage in IOCL. What one will experience basically depends on one’s GD-Mates! Sometimes it might happen that some of them would not even give you even a single chance to speak or they might interrupt you a lot! Keep in mind that the judges are experienced and they would notice everything. Also quality of views is more important than quantity. In my case, everyone got chances to speak whenever they genuinely wanted to. One Tip: Don't panic when you are are not able to initiate the GD, you will get many chances to express your views.

Careers360: Were the PSU interviews easy or tough? Any tips on what not to do for the interviews?

Aashish Aggarwal: PSU interviews are easy but the way we look at them makes them difficult. During the interview, only basics are asked but due to tension, we are not even able to speak what we want to. Interviewers are experienced and they would judge your personality and abilities just by looking at your face, how well you behave, how you explain the simplest of things. So, try not to worry much.

Careers360: Any other important tips to GATE aspirants who wish to join PSUs?

Aashish Aggarwal: GATE exam tests the aptitude level and the learning power of an individual. Before starting GATE preparation, you must be motivated enough or else a half-hearted effort will not yield the desired result. Study as much as you can and do not aim for ranks. The objective should be to attempt correctly all the questions that you know.

how to register for IOCL recruitment through gate 2021

You need to register with an e-mail ID and phone number and fill the details and upload required documents. The detailed instructions that you have to follow while filling the application will be given. You have to read those instructions carefully. GATE 2020 or earlier score is not considered for IOCL GATE 2021 recruitment.

There are many a top coaching for gate preparation. Some of the best online coaching  for gate Metallurgicial engineering are given below

how to write mock tests in this app??

IIT Bombay which would conduct gate 2021 exam, has released the mock test of GATE 2021 at  gate.iitb.ac.in on November 25. GATE 2021 mock test is a sample of the actual question paper in which student would participate in gate 2021 exam. however you may follow the below link to practice the gate mock test:

hope it would help.

i currently doing my b.tech from bihar engineering college, in Electrical branch, i want to prepare for gate 2024 what should i do and dont ?

That's actually great knowing that you have ample time to prepare for the exam. 3 years of dedicated & consistent practice will yield will very good results. I appreciate your thought about the same.

Firstly, download the syllabus of your stream from the official site of GATE. After that interact with students from your vicinity & in your circle if anyone is preparing for the same. You can also watch YT videos for getting more information about your particular stream. Kindly be known of what is expected of you & what you need to do everyday. Enjoy the learning process & you'll absolutely enjoy to solve the application problems of the exam. Understand the basic concepts of your stream & read them thoroughly. This will help you understand the concept. Be in touch with the subjects, prepare small notes for whatever you are learning. By this, you can do revision & will not forget easily. Solve problems & get on test series later in your final year. Be consistent & prepare well for the same.

is there any negative matk availablr for gate exam??

Yes there are negative marking in gate. This year GATE exam paper will have three different types of question pattern. There will be Multiple choice question (MCQs) where you will have four options and only one is correct. Then you have fill the blank type where you won't have any options you need to solve the question and put the obtained value in the blank and the final question type which is added this year is the Multiple selection questions (MSQs) where you will have four options and more than one can be correct you will need to choose the right option and in such questions if you do not select all the right options then you will be awarded zero marks. There are no partial markings for such questions but the good news is that there are not negative marking for Multiple selection questions (MSQs) and fill the blank type. Only the MCQs will have negative marking for 1 mark questions  1/3 mark will be deducted every wrong answer and for 2 mark questions 2/3 mark will be deducted for every incorrect response.