One of the prime objective of our education system is to give every student a level-playing field, notwithstanding whether the student is from an English- or Hindi-medium background. But in reality, it remains firmly loaded in favour of students from English-medium. A case in point is Prakhar Patidar, the AIR 12 in Agricultural Engineering (AG), who has done his 10+2 in Hindi medium. When he first started his GATE preparation, his not-so-fluent English meant, he had to double the effort simply to understand concepts that otherwise, in his native language, would have been a stroll in the park. He was frustrated and may be even livid at the unfair system that punishes students like him. But the good thing is he somehow found the strength not only to keep fighting on, but to start dreaming of securing the AIR 1. It is another matter that he missed the AIR 1, but it hardly diminishes what he has achieved. The son of a school teacher and home-maker, he is a glowing example of how the indomitable spirit can turn adversity into an opportunity. 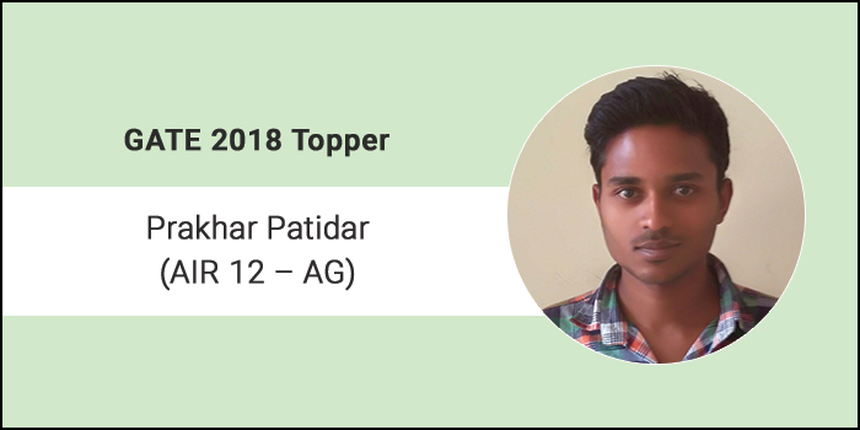 In an exclusive interview with Careers360, Prakhar spoke on what inspired him to appear in GATE 2018, his preparation strategies and shared how is he no one-dimensional wonder!

If you didn’t know,  Prakhar has represented his school at the national-level volleyball competition. Read on to learn more about him.

Here are excerpts of the interview:

Prakhar Patidar: I appeared in Agricultural Engineering paper and scored AIR 12. My GATE score is 809, with 42.33 marks out of 100.

My target this year was to score the 1st rank in GATE. But unfortunately, in a few questions, I goofed up in unit conversion; otherwise I had got the answers right. In another case, I wrongly interpreted a question and lost out on valuable marks.

Prakhar Patidar: Yes, this was my first attempt.

Prakhar Patidar: A senior of mine scored 3rd rank in GATE. And from that I got inspiration to appear in GATE. Also, when I was in the first year of my B.Tech degree, I had this desire to take admission in an IIT, and GATE presented me this opportunity.

Instead what I have in mind is to get into IIT Bombay and study and pursue M.Tech in Industrial Engineering and Operational Research. It is amongst the most sought-after disciplines. Since my ranking is not inside the top 3, I have to appear in an interview; the top three are generally eligible for direct admission.

Prakhar Patidar: No, I didn’t take any coaching and relied completely on self-study.

Careers360: How did you prepare for the exam?

Prakhar Patidar: I started my preparation in around March-April, or almost an year in advance. I studied for a minimum of 10 hours every day. Preparation time included around 1-2 hours of group study with 4-5 friends, where we could discuss our problems and preparation strategies.

In the days leading up to the examination, especially in the last week or so, I wasn’t studying as hard as I did earlier. There is no particular reason why I did not feel like studying longer hours, may be I was getting fatigued of reading the same stuff over and over again. But it didn’t harm my chances, as by then I had did the hard work and the basics covered.

And on the last night before the exam, I couldn’t sleep. The gravity of the situation finally got to me, and I had butterflies in the stomach.

Careers360: Did you take mock tests and solve previous years’ question papers as part of your preparation?

Prakhar Patidar: No, I didn’t practice any mock tests. But I did solve a lot of previous years’ question papers. Also, unlike, say for Instrumentation Engineering (IN), there is no test series that is available for agricultural engineering paper. Sample papers are also not easily available.

Prakhar Patidar: Coming from a non-English background, the initial phase is a bit difficult, especially the first few months. You feel like giving up, because to understand a concept, you have to put in double the effort. However, I refused to give in and kept trying. After that tough initial phase things became much easier.

Prakhar Patidar: I found farm machinery and farm power to be the most scoring. Also, soil and water conservation engineering is considered to be very score-able.

Prakhar Patidar: To get refreshed, I would play a game of volleyball every now and then. Happy to inform you that I have represented my college volleyball team at the national level.

Careers360: Did you have any strategy on how to attempt questions? Kindly share your exam experience with us.

Prakhar Patidar: My plan was to answer at least twenty questions of 2 marks each, and another twenty 1-mark questions. But it didn’t go according to plan.

What I did was I attempted any question that I thought I could solve; questions that I didn’t understand or thought would require some time, I left for later. The point was not to waste time trying to solve difficult questions.

Prakhar Patidar: The numericals questions were the difficult part of the question paper, especially those related to probability. I didn’t study the topic in depth, and only some parts of it.

Prakhar Patidar: If you are doing self-study and from a non-English medium background, it might  take some time to get into a comfortable zone. So, it is important that the candidate keeps his patience. My experience is Hindi-medium students don’t have a solid-enough base when it comes to English.

Crack GATE 2021: Why Practicing Previous Year Papers is a must?

What are the best books for GATE Electronics and Communication...

What are the best books for GATE EC (Electronics and Communica...

What is a Good GATE Score

What is a good GATE score? - Candidates can check a detailed i...

How to Prepare for GATE 2021 Computer Science Engineering (CSE)

How to Prepare for GATE 2021 Electronics and Communication Eng...

22 hours ago
Read More
View All News and Articles

full details about JRF through GATE 2021exam ?what are the qualifications needed?what is the salary package?how the work is to be?what rank should I get in gate 2021?

mainly jrf recruitment is done by ugc net score, however institute like iit kharagpur, iit kanpur has lots of research fellow recruitment comes for students who are recently pass b.tech course , have interest for research in new technologies, interested to do phd in future ,should apply for jrf positions. however there is no specific number of recruitment do not comes every year, it depends on the projects and funding for hiring of jrf, however by getting good score in gate you may go for m.tech course and may apply for psus job.

see you did not mention which branch you belongs to, however at this score you have less chances for top nits and other tier 1 institute in india, I suggest you to try for some other mtech entrance test like vitmee, bits hd, manipal university entrance test etc.

You may use Careers360 college predictor tool to know your predictable colleges https://engineering.careers360.com/gate-college-predictor

see at this score you have less chances for jntuh or osmaia university if you opt for mtech in structural engineering related course and it goes for any of the category you belongs to, I suggest you to try some other mtech entrance exams like vitmee, bitshd.

Candidates getting admission in dual degree through JEE Advanced need not to appear in GATE.And the cut off will not be the same for dual degree through JEE Advanced and M.tech through GATE.Considering previous year cut off trends it is difficult to get seat in IITs with such score.You need to score at least 600 or above to have decent chances of getting seat in a IIT.

You may try our GATE college predictor

My GATE score is 334 in Civil Engineering belonging to OBC category. Is there any chance for me to get admission in NIT?

To be honest with you, for a score of 334, a seat in Civil Engineering is going to be tad difficult b ased on previous years' data. Having said that this is based on 2019 data and cut offs change every year depending on various factors. Please use our GATE College predictor for possible chances: https://engineering.careers360.com/gate-college-predictor

View All Questions
Have a question related to GATE ?