Mohammad Saajid Hauq, an alumnus of NIT Uttarakhand credits his mother for being the motivating constant during his GATE preparation that saw him secure an All India Rank of 52 in the exam. His unwavering focus on the exam has brought him closer to his dream of getting placed in a leading PSU. Here, he speaks to Careers360 about his strong preparation for what is his second GATE attempt, schedule he followed peppered with advice for future aspirants. Read on… 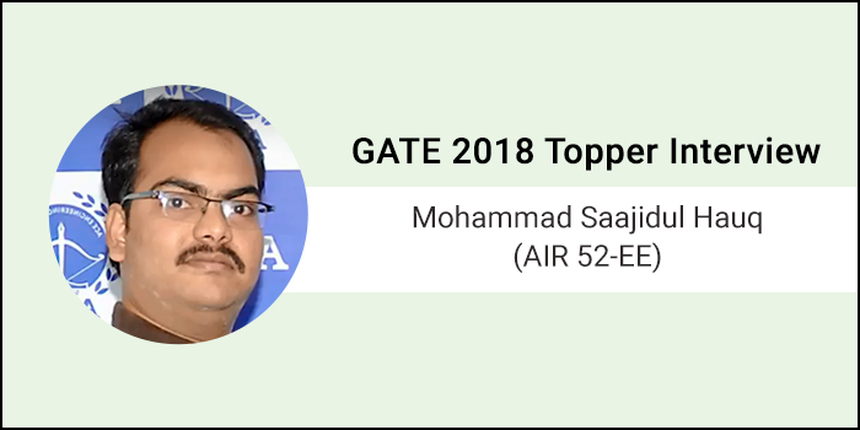 Mohammad Saajid Hauq: I have done my B.Tech from NIT Uttarakhand. I passed out in 2017. I basically belong to Vijayawada, Andhra Pradesh.

Mohammad Saajid Hauq: This is my second attempt. In 2017, I did not even qualify. Then, I was busy with my project work and I did not have time for GATE. I also didn’t know much about the exam at that point of time.

Careers360: What was the reason you appeared for GATE 2018? Pis elaborate.

Mohammad Saajid Hauq: My main aim is to work in a leading PSU like IOCL, PGCIL etc. For that I need to have a good GATE rank. So, I constantly worked to achieve it.

Mohammad Saajid Hauq: Yes, I have applied to PSUs such as IOCL, NTPC, VIZAG STEEL, BHEL, BARC and more.

Careers360: When did you start your preparation? How did you prepare for the GATE exam? How many hours did you put in per day as per the stage of preparation?

Mohammad Saajid Hauq: I started my preparation from mid June 2017. As, I was starting my preparation for the first time, I had to build from scratch. So, I started preparing subject wise in depth for about 3 months. The trick here is to make sure that you give subject wise mock test after completing each subject. This should be done in parallel to your learning so that you can remember the subject for a long duration. Initially, I used to study for about 6 hours. I simultaneously attended GATE coaching classes till the last week of August. After that I shifted to studying from 6 to 10 hours with a short nap of one hour in the mid afternoon.

Mohammad Saajid Hauq: Yes, I have taken coaching from Ace Academy Vijayawada as I had to prepare from a basic level. Their teaching was in depth and this helped a lot. There were also doubts clearing sessions. I credit a portion of my success to them.

Mohammad Saajid Hauq: Everyone should have their own preparation strategies as it paves the path to a good performance in the entrance exam. It is person dependent and not really common for everyone.

My GATE strategy went as follows:

Engineering Mathematics: This is pretty scoring. So I completed it in the first month and kept on practicing throughout my GATE preparation so that I didn’t forget anything that I learnt.

The above mentioned is basically covering the most important portions of the syllabus.

The most crucial part of your preparation comes next

Careers360: How important do you feel mock tests are and why? Is it true that if one solves the previous year question papers, there is a good chance of cracking exam successfully?

Mohammad Saajid Hauq: Mock tests and solving the previous year GATE problems are the heart of the preparation and a good chance of cracking the exam successfully. You see you get to know what the exam pattern is like, you understand time management.

Careers360: Which books did you follow for GATE preparation? Pis name some very important must read books for GATE

Mohammad Saajid Hauq:The standard textbooks are good. I followed the Ace Academy notes as they were elaborate. For doubts, I referred to C.L.Wadhava and PS Bhimbra etc.

Careers360: Which are the topics one should focus more on? Kindly give us some details

Mohammad Saajid Hauq: Well, don’t neglect Maths. Like I said earlier, its scoring. Apart from that, one should touch all topics. There is nothing like more important or less. A question may come from anywhere.

Mohammad Saajid Hauq: The toughest aspect during GATE preparation was to focus and not deviate. It’s hard to motivate oneself to get going. At such times, I would remind myself that if I put in hard work for these next few months, I would reap the benefits and fulfill my dream. So the effort is worth it. Only you should push to reach there.

Mohammad Saajid Hauq:My afternoon nap was something that helped. I would sleep every afternoon for around one and a half hours but not more. It allowed me to start again with a fresh mind and the tiredness would disappear. So I would recommend that.

Careers360: How should you schedule answering the GATE exam -which section to attempt first and which next? Did you have any strategy? Kindly share your exam experience with us.

Mohammad Saajid Hauq: If you are stressed out during the exam, chances are you may not do well. So try to avoid that. I attempted the aptitude questions first and then one mark questions. Last I went for the 2-mark questions.

This method allows one to be immersed in the exam and then the stress will drop once the answers roll out.

Mohammad Saajid Hauq: My first advice would be to not to think that you have to solve each and every question. I did plan the exam but ended up doing some silly mistakes. I also thought to solve all the questions but couldn’t so I got tensed.

It's okay not to know some, not to get time to answer some. I know after all the hard work, that would be tough but you stand better chances of scoring when you do most of them right rather than go wrong in this quest of answering everything.

Mohammad Saajid Hauq: Build you conceptual and technical base well. If the foundation is strong, you can build further. Surround yourself with positivity and motivate yourself. My mother is my strongest motivator and she kept me going. So lean on someone like that if you need to. Always share your learning – you will only improve yourself. Last but not least – Do not deviate from your goal; focus hard and don’t stop till you reach there.

PSU Recruitment through GATE 2022 -Candidates who are seeking ...

can a B.E ece student give gate ES and get into iits on environmental engineering branch ??

Anyone can give exam in whichever stream he is interested in GATE. There have been many people who have done this and excelled.

ECE students are very much eligible for GATE exam in . A lot of other BTech students give GATE. I have a batchmate in IIT Kanpur who did his BTech in Mechanical and obtained 239 AIR in GATE 2020.

if you want to do job in psu you should appear in gate exam from ece stream since it has more recruitment than cs.

you can access this link for the question paper of GATE you need . All the Best

you can go with this link for the papers you need . All the best

Requested sir, I am studying currently betch second year in civil engineering department ,I wanted to start gate preparation now, then how I began this preparation sir, would you tell something to me sir thank you

Fellow student, I am giving you a link. After opening the link, you'll see step by step instructions for gate preparations and how to achieve good grades in the examination. Wishing you luck for gate beforehand.

How the prospects for UOH-Integrated Mtech interms of placement and are they preferred as equivalent regular Mtech who do through GATE.Also Are they elgible to do directly Phd after IMtech

Hi, University of Hyderabad has good faculty most importantly but the placement is average. The infrastructure and courses taught there are excellent. 80% people get placed from the campus drive itself. The professors treat every student equally as long as you get your work done on time they do not mind how you have entered the university. Yes you can do Ph.D. after. If you still have doubts feel free to comment. hope this helps.