Afraz Siddiqui is not new to GATE. An AIR 833 in GATE 2017 (EE) made him determined to better himself and became the reason for attempting GATE 2018. With the announcement of GATE 2018 result on March 16 by IIT Guwahati, Siddiqui had reason to celebrate as he did better himself. The Kanpur lad scored an AIR 36 in Electrical Engineering branch. Afraz is an alumnus of JSS Academy of Technical Education, Noida where he had pursued Electrical Engineering. In a candid interview with Careers360, Afraz talks about the reasons that made him appear for GATE, again, what he did differently in this attempt to taste success, tips, and guidelines for future aspirants. 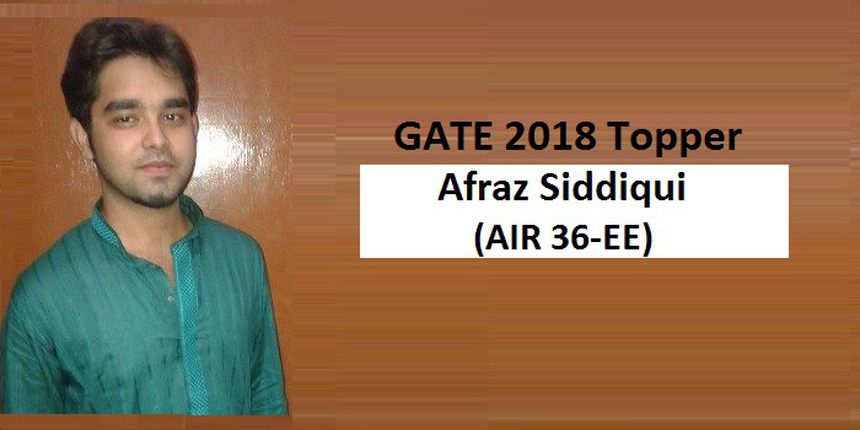 [Want to Know Which Colleges, Specialization, and PSUs to Apply on the basis of your GATE 2018 Scores? Click here]

Here is the excerpts from the interview:

Afraz Siddiqui: My name is Afraz Siddiqui and I completed my engineering from JSS Academy of Technical Education, Noida in Electrical Engineering. I did get into IIT Roorkee for my masters.

Careers360: What was the GATE paper you appeared in? What rank did you get in GATE 2018? What is your GATE score and how many marks did you secure out of 100 in GATE paper?

Afraz Siddiqui: No, this is my second attempt at GATE. My first attempt was in 2017 where I had got a AIR 833. I was in my final year of engineering then and the results were not satisfactory. So I sat for the exam again determined to better my performance.

Careers360: What was the reason you appeared for GATE 2018? Please elaborate.

Afraz Siddiqui: It is my wish to join leading public sector units. PSU Recruitment through GATE is one good way to join leading PSUs. Therefore I reappeared for GATE 2018. I did avail admissions at IIT Roorkee on the basis of my GATE 2017 score but I don’t want to continue with my masters anymore.

Careers360: Have you applied for any PSUs recruiting through GATE? Which ones?

Afraz Siddiqui: I have applied for IOC, PGCIL, NTPC, BHEL, THDC which are some of the maharatnas. Apart from these, I have also applied for NLC, RVNL which are miniratnas.

Careers360: When did you start your preparation? How did you prepare for the GATE exam? How many hours did you put in per day as per the stage of preparation?

Afraz Siddiqui: I started my preparation back in October 2017 with full rigor. Mainly I used to study from the notes/textbooks provided by various coaching institutes. I have not referred to any standard books; my preparation was fully focused on the parts where I was weak in my last attempt. I spent a minimum of 8-10 hours daily in studying the concepts and revising the short notes prepared by me till November 2017.

Careers360: Have you taken any coaching? If yes, from where? How did it help?

Afraz Siddiqui: No, I did not take any coaching. However, I had study material of various coaching institutes which helped me a lot.

Careers360: Can you share any preparation strategies with our readers? When should one start their preparation for GATE? How to schedule study time and make timetables and so on?

Afraz Siddiqui: According to me, preparation strategy is made up of three parts:

Afraz Siddiqui: Mock tests are the most important part of preparation. Attempting mock tests of GATE 2018 will definitely give you an ace over others. During GATE preparation, we have a lot of pressure on us for obvious reasons and this is where test series help to boost the confidence. I had joined test of ACE Academy, Kreatryx and Made Easy and I had attempted mostly all the full length tests of all three.

Apart from test series, GATE 2018 sample papers of previous years should also be attempted, at least once in a week for all subjects. This will make you think and crack the question a lot faster in the actual exam.

Careers360: Which books did you follow for GATE preparation? Please, name some very important must-read books for GATE.

Careers360: Which are the topics one should focus more on? Kindly give us some details.

Afraz Siddiqui: EE students should focus more on core subjects like Power Electronics, Electrical Machines, Power systems because questions from these three subjects are asked in abundance. Then next is Engineering Maths. Control Systems is one subject which I think no aspirant should leave at any cost. Questions from EM will be for 15 marks while Control Systems is always a subject that always figures in GATE exam.

Afraz Siddiqui: The toughest aspect of my preparation was Revision- which is the most underrated part of the preparation of an exam. I had made a four-day strategy thereby effectively revising and attempting the questions of all the 12 subjects in 4 days.

Afraz Siddiqui: After a long session of studying, I generally used to listen to music and go out for cycling. Youtube is also of great help but in moderation.

Afraz Siddiqui:: Time management used to be a problem for me. After I worked on it, I started performing better in my tests.

Afraz Siddiqui: Hard work and smart work always go hand in hand. Don’t rely only on smart work. You need to put a lot of effort to reach to your dream. I would like to conclude with a line which my school Principal, Sharmila Nandi used to say, ‘The competition is with no one but yourself.’

Crack GATE 2021: Why Practicing Previous Year Papers is a must?

What are the best books for GATE Electronics and Communication...

What are the best books for GATE EC (Electronics and Communica...

What is a Good GATE Score

What is a good GATE score? - Candidates can check a detailed i...

How to Prepare for GATE 2021 Computer Science Engineering (CSE)

How to Prepare for GATE 2021 Electronics and Communication Eng...

21 hours ago
Read More
View All News and Articles

full details about JRF through GATE 2021exam ?what are the qualifications needed?what is the salary package?how the work is to be?what rank should I get in gate 2021?

mainly jrf recruitment is done by ugc net score, however institute like iit kharagpur, iit kanpur has lots of research fellow recruitment comes for students who are recently pass b.tech course , have interest for research in new technologies, interested to do phd in future ,should apply for jrf positions. however there is no specific number of recruitment do not comes every year, it depends on the projects and funding for hiring of jrf, however by getting good score in gate you may go for m.tech course and may apply for psus job.

see you did not mention which branch you belongs to, however at this score you have less chances for top nits and other tier 1 institute in india, I suggest you to try for some other mtech entrance test like vitmee, bits hd, manipal university entrance test etc.

You may use Careers360 college predictor tool to know your predictable colleges https://engineering.careers360.com/gate-college-predictor

see at this score you have less chances for jntuh or osmaia university if you opt for mtech in structural engineering related course and it goes for any of the category you belongs to, I suggest you to try some other mtech entrance exams like vitmee, bitshd.

Candidates getting admission in dual degree through JEE Advanced need not to appear in GATE.And the cut off will not be the same for dual degree through JEE Advanced and M.tech through GATE.Considering previous year cut off trends it is difficult to get seat in IITs with such score.You need to score at least 600 or above to have decent chances of getting seat in a IIT.

You may try our GATE college predictor

My GATE score is 334 in Civil Engineering belonging to OBC category. Is there any chance for me to get admission in NIT?

To be honest with you, for a score of 334, a seat in Civil Engineering is going to be tad difficult b ased on previous years' data. Having said that this is based on 2019 data and cut offs change every year depending on various factors. Please use our GATE College predictor for possible chances: https://engineering.careers360.com/gate-college-predictor

View All Questions
Have a question related to GATE ?