GATE 2016 is less than 4 months away and will be held January 30 &31, 2016 as well as February 6 & 7, 2016. Careers360 bring another interview with Suhit Sinha who scored AIR 10 in Computer Science engineering in GATE 2015. Suhit prepared for GATE 2015 while being employed full time at a leading MNC. Carefully scheduling and adhering to his study plan, Suhit Sinha tasted success in GATE 2015 thus fulfilling his dream of studying further from IIT Bombay. Read more about Suhit’s preparation strategies and how he worked his way to being one of the toppers in GATE 2015. 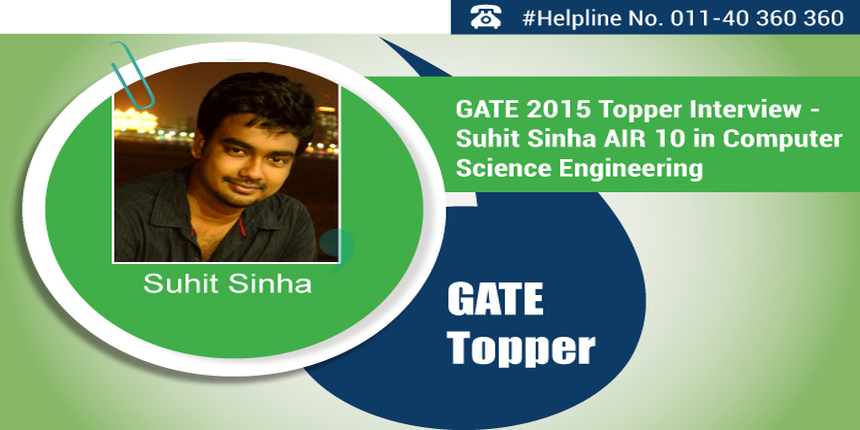 Suhit Sinha: I have done my engineering from Kalyani Govt. Engineering College, one of the government colleges of West Bengal, in Computer Science and Engineering.

Careers360: what was the GATE Paper you appeared in? What rank did you get in GATE 2015? What is your GATE score and how many marks did you secure out of 100 in GATE paper?

Careers360: What was the reason you appeared for GATE 2015? PSU or further studies? Pls elaborate your reasons.

Suhit Sinha: I was working in an IT Service MNC while appearing for GATE 2015. My reason for writing GATE 2015 was solely to pursue higher studies in one of the premier institutes India, i.e. IITs or IISC Bangalore. IITs provide the best platform to an engineer to pursue his future endeavour and this is what attracts me the most. Be it quality of studies, facilities or getting high end jobs, IITs are the best of them all.

Careers360: If PSU, have you applied to any and which ones?

Suhit Sinha: I was more or less sure of not joining any PSU jobs; but I applied for IOCL only and got a call for interview from their side.  I attended the interview for experience sake. Few days back, I got the final joining offer from them but I will not be joining them.

Careers360: When did you start your preparation?  How did you prepare? How many hours did you put in per day as per the stage of preparation?

Suhit Sinha: As I said earlier, I was employed when GATE 2015 was announced. So I had to study only after my office hours. Therefore, I started my preparation from the very beginning of November, 2014. I tried to put some extra effort on weekends. During the weekdays, I tried to study as much as I could. One of the points I would like to mention here is that group studies helped me a lot. I can say, it clears a lot of doubts very quickly.

Suhit Sinha: No, I haven’t taken any coaching for GATE 2015. I had only taken mock test for the purpose of GATE 2015. It helped me to get an idea of the GATE interface and also helped me to know where I stood with my current preparation at that point of time.

Careers360: Can you share any preparation strategies with our readers? How to schedule study time and make timetables?

Suhit Sinha: Few points I want to emphasize on are,

Careers360: How should one schedule answering the GATE exam – which section to attempt first and which next?

Suhit Sinha: I attempted my GATE paper as follows:

Suhit Sinha: For Computer Science paper, I think Automata, Networking, Operating Systems, Digital Electronics, Data Structure, DBMS and Maths are the main scoring areas. These topics have a large share of questions in each year’s GATE paper. Specially don’t miss the maths part. Its easy to score from this area and also have 15 marks in GATE which may become a deciding factor.

Careers360:  Since all the GATE exams are online now, how mandatory is it for students to practice online and how frequently?

Suhit Sinha: I think CS students should be quite comfortable with the online thing. However, a prior idea regarding the interface will help a student tackle the exam hours comfortably. Known things always help to calm your nerves.

Careers360: What did you feel was a tough thing in the GATE exam?

Suhit Sinha: I think there were a few more than expected questions from software engineering in this year’s paper. Also, a few questions from Computer Architecture and networking were tough.

Suhit Sinha: Coming to the 2nd question first, yes I think if you solve previous year GATE papers thoroughly then there is a good chance that you will crack the exam more easily. Of course this has to be after studying the whole syllabus by yourself.

Now coming to the first question, it’s good to take a mock exam before the GATE exam to get a rough idea of how the exam works and where you stand with your preparation. But except that, it will not impact in a huge way.

Careers360: Which books did you follow for GATE preparation?

Suhit Sinha: Books I studied are as follows:

Careers360: .Any advice for the future aspirants?

Suhit Sinha: If you really dream about coming to IITs then it should not be too difficult to put 4-5 months of hard effort. I am currently in IIT Bombay and believe me it’s a place you can dream of. You will get everything you can imagine over here.

My only advice to all the aspirants is that study each and every thing minutely. Don’t just read it because you have to; instead cover each topic in detail. Try to cover your syllabus and dedicate the last month to only solve the questions of previous GATE papers.

We at Careers360 would love your inputs, suggestions to bring more useful articles to the fore. Drop all your comments on the exclusive GATE section at https://www.engineering.careers360.com/forums/gate/official-new-changes-in-gate-2016-ask-doubt-query-here

I am ECE student 2019 passedout. I want to do M.tech related to computer course. Is that possible?

Yes many students have completed their B.Tech and M.Tech from different branches.

Many students appear in the Gate exam in different branches.Someone gives the gate exam in CS branch whether he/she has completed B.Tech in Civil/Mechanical engineering.

So if you give gate exam in different branch then you can do M.Tech in that particular branch.

I have graduated in Bsc microbiology. Can I get admissions to MSc-PhD medical microbiology integrated course in IIT Khargpur based on GATE qualification and ranking?

No, it's not possible to get admissions to MSc-PhD medical microbiology integrated course in IIT Kharagpur based on GATE qualification and ranking. As CAT has nothing to do with biology.

For that give JAM

Joint Admission Test for M.Sc. (JAM) is an all-India examination conducted across the country jointly by the Indian Institutes of Technology and the Indian Institute of Science. JAM is an all-India Entrance examination for admission to M.Sc. (Two Year), Joint M.Sc.-Ph.D., M.Sc.-Ph.D. Dual Degree and other Post-Bachelor's Degree programs at the IITs and to the Integrated Ph.D. programs at IISc.

is there any sample paper is available for BM with solutions!

yes , you can find it online

you can use the jee college predictor - https://engineering.careers360.com/jee-main-college-predictor?ici=cp-listing_engineering&icn=JEE-Main-College-Predictor

To know more about GATE 2022 visit the link below:

To know more about Commerce as a career choice visit the link below: