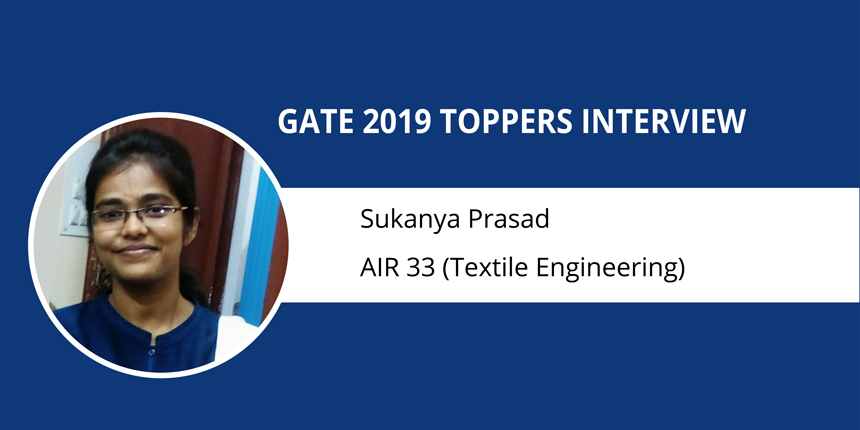 Careers360: What was the GATE Paper you appeared in? What rank did you get in GATE 2019? What is your GATE score and how many marks did you secure out of 100 in GATE paper?
Sukanya Prasad: I appeared for paper TF- textile engineering and fibre science. I secured  AIR 33 and my GATE score is 734. I secured 68.67 marks out of 100.

Sukanya Prasad: This was my second attempt for GATE.

Careers360: What was the reason you appeared for GATE 2019? Please elaborate.
Sukanya Prasad: I appeared in GATE 2019 to secure a better rank so that I can get wide scope of opportunities for my further studies.

Sukanya Prasad: If there are any vacancies this year through GATE for textile engineering I will definitely apply. I haven’t applied for any recruitments in PSUs as of now.

Careers360: When did you start your preparation?  How did you prepare for the GATE exam? How many hours did you put in per day as per the stage of preparation?

Sukanya Prasad: I started my serious preparations for about 8 months before the exam. I had joined an online coaching named EXPONENTIAL CAREER CAMPUS which has been founded by IITIAN SACHIN GUPTA AIR 1 GATE 2016. I seriously followed the notes provided by the faculty there. Initially, I studied for 3-4 hrs and then increased to 6-7 hours as the date of exam came near.

Careers360: Have you taken any coaching? If yes- From where? How did it help?
Sukanya Prasad: As I told, I joined an online coaching named EXPONENTIAL CAREER CAMPUS formed by IITIAN SACHIN GUPTA AIR 1 GATE 2016. Sachin sir helped me in clearing my basic concepts and strengthening my numerical portion.

Careers360: Can you share any preparation strategies with our readers? When should one start their preparation for GATE? How to schedule study time and make timetables?
Sukanya Prasad: Be consistent and clear with your basics. I think one year is sufficient for a decent rank. One should give oneself little flexibility in making time tables. Make such a timetable which you can follow. Don’t set impossible goals.

Careers360: How important do you feel mock tests are and why? Is it true that if one solves the previous year question papers, there is a good chance of cracking the exam successfully?
Sukanya Prasad: Mock tests are very important as they give a proper analysis of your strengths and weaknesses and also teach you time management. Yes, definitely if one solves past year papers one gets a strong command on the pattern of questions which is indeed very helpful.

Careers360 Which books did you follow for GATE preparation? Please name some very important must read books for GATE
Sukanya Prasad: WE KLEIN for spinning, JE Booth for testing for weaving and for processing I followed notes of Sachin sir.

Careers360: Which are the topics one should focus more on? Kindly give us some details
Sukanya Prasad: One should clear the basics and focus on numericals of testing and spinning.

Sukanya Prasad: I felt preparing for weaving was a bit tough.

Sukanya Prasad: I used to practice meditation from BRAHMA KUMARIS which helped me a lot to unwind.

Careers360: How should you schedule answering the GATE exam – which section to attempt first and which next? Did you have any strategy? Kindly share your exam experience with us.
Sukanya Prasad: I first answered the numerical portion as it is time-consuming.

Sukanya Prasad: I definitely think that Numericals from processing were the most difficult section of the exam.

Sukanya Prasad: Be consistent, work hard and avoid silly calculation and mistakes in the exam.

IIT Gandhinagar M.Tech Admission 2020 - Get all details about ...

19 hours ago
Read More
View All News and Articles

I have a gate score pf 409. Will I get admission in civil engineering in kerala government colleges?

see  cutoff score changes every year and it depends on some factors like number of participants, questions difficulty level, seat matrix, your stream, candidates category etc, now if you opt for mtech in structural engineering there is less chances of getting in government colleges as this score since structural engineering is most demanding among civil students.

Hello,
VIT takes admission into its M.tech courses only through VITMEE exam. The candidates who are GATE qualified and seeking admission in VIT university campuses, need to appear for VITMEE 2020 examination and their admission will be on the basis ofVITMEE result. If you are shortlisted for interview, then you might be needed to submit your GATE scores. But while submitting online application form you don't need to submit your GATE scores.
Please visit this link for more information
https://www.google.com/url?sa=t&source=web&rct=j&url=https://engineering.careers360.com/articles/vitmee/amp&ved=2ahUKEwjS3sH9_dXpAhUIH7cAHal2DD4QFjAAegQIAxAB&usg=AOvVaw27UpLt-rPdQ8sJ7-RFy2rm&ampcf=1&cshid=1590649400100
Hope it helps
Read More
Answer

UG BSC student who still in third year can apply for chemistry in this exam ?

Hello student I'm sorry to inform you but if you're in final year of Bsc you're not eligible to appear in Gate entrance examination as eligibility criteria says -
Eligibility - candidates must be in passing year or Graduate of Bachelors degree or equivalent in engineering or Architecture or Masters degree in science/computer applications.
So you need to do Msc if you're willing to appear in Gate entrance examination.

For more updates refer to the link mentioned below - https://engineering.careers360.com/articles/gate-eligibility-criteria/amp

after b tech cse what is the best option m tech or mba?

There is simple question -  Do you like coding? If the answer is no, then go for MBA straight without any second thought.

If the answer is yes, but you would like to explore management now then you can go for MBA or if your interest is in the coding, especially in the fields like data science, ai or machine learning then Mtech is a option for you.

Hope this helps. Thank you.

hi, I written gate paper in Engineering Science (paper code -xe). I have done my b.tech in mechanical engineering . which nits accept (xe gate paper) and which branch or department can i get. ???

Hello,
Since you have written GATE paper in XE, you won't be eligible for jobs into the PSUs. XE paper is quite easy compared to other paper codes as you have many choices out of which only two has to be attempted. XE paper is specifically for studies into M.Tech and direct PHDs. So you can get into NITs with your GATE XE score.
As you have done bachelor's degree in mechanical engineering, you can get into NITs for mechanical engineering by giving XE paper. All NITs take admission through XE paper.

Engineering Sciences (XE)syllabus majorly divided into 3sections.The first section isGeneral Aptitude and the second section is Engineering Mathematics which is named as section A is compulsory for candidates.The third part comprises sectionsB to H andcandidates have to choose any two sectionsto appear for the exam.
Hope it helps
Read More
Answer

DRDO Recruitment through GATE 2020 - Application Starting on May 29