Survanshu Saxena is a step closer, to his dream of studying in IISc Bangalore or leading IITs and pursuing research there. A student of Biotechnology at Hindustan College of Science and Technology, Mathura, Survanshu appeared for GATE 2018 and scored an India rank of 10 in the exam. His mantra of having no strategy worked as he set up goals and tried to achieve them as opposed to having a fixed schedule or timetable. His biggest challenge was to study for his B.Tech and GATE 2018. In this article, he talks to Careers360 elaborating on his preparation methodology, for GATE, important topics and books to refer. He also talks about the challenges he faced and overcame, tips for future GATE aspirants. 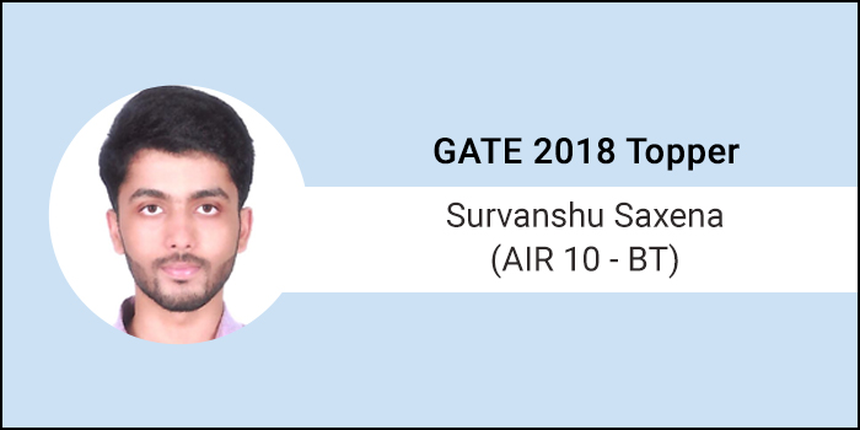 Survanshu Saxena: I am from Agra. I am a final year B.Tech. (Biotechnology) student of Hindustan College of Science and Technology, Mathura.

Survanshu Saxena: Yes, this is my first attempt.

Survanshu Saxena: I appeared for GATE 2018 because I always dreamt of getting into research. GATE has opened the doors of opportunities for me to follow my dream of enrolling for research at the IITs/IISc.

Survanshu Saxena: Till now, I have not applied in any PSU.

Careers360: When did you start your preparation?  How did you prepare for the GATE exam? How many hours did you put in per day as per the stage of preparation?

Survanshu Saxena: I started my GATE preparation just after the end of the 2nd year of my B.Tech. When I started, I only focussed on understanding the GATE exam pattern (syllabus), major topics (for numerical and theory) as per weightage and gathering relevant study material. Then, after analysing major topics, I started to study those thoroughly all the while solving previous year question papers within a stipulated time. I didn’t have any fixed hours of study. Sometimes I only studied for 2 hours, sometimes 8 hours, sometimes not at all but in the last two months of my preparations, I devoted a minimum of 14-16 hours daily.

Survanshu Saxena: No, I have not taken any coaching and relied completely on self-study.

Survanshu Saxena: “Having no strategy is also a strategy”. One should start their preparations as early as possible. Study time should be chosen according to your comfort – for example if you are comfortable studying at night, you should do that. I have a preference for daily timetables as I am comfortable with them. So I used them to complete the work I had assigned myself before going to sleep.

Survanshu Saxena: Mock tests are important but I had chosen to solve previous year papers over them. I solved all previous year GATE question papers multiple times from 2005-2017. It’s true that if one solves the previous year papers and clear their doubts regarding each and every question, then there is a great chance of cracking the exam with a good rank.

Careers360: Which books did you follow for GATE preparation? Pls name some very important must read books for GATE

Careers360: Which are the topics one should focus more on? Kindly give us some details

Survanshu Saxena: Some of the important topics in which one should focus more on are:

Survanshu Saxena: The toughest aspect in my GATE preparation was to coordinate between my GATE preparation and B.Tech which also included external exams, assignments, practicals etc. However, I managed to create a balance and used up every bit of free time to study for GATE. My daily commute from home to college and back takes around one hour and twenty minutes one way. I used this time too to study for GATE. Only a dedicated approach and mind-set can help achieve a good rank.

Survanshu Saxena: Some topics I think are must read are - Bioprocess, rDNA technology, Biotechnology techniques. One should work for this and not rely on anything. You see when you sit and check for the topics, you understand the syllabus, exam pattern very well. Past year question papers have to checked, re-checked and such to ascertain these topics.

Survanshu Saxena: During my leisure time, I watched online motivational lectures. It not only kept me motivated but helped in developing myself.

Survanshu Saxena: There is nothing like what to answer first and what not. Just go through the whole paper and try to solve each and every question. If you don’t know the answer, just go ahead to solve the next question without wasting time on the previous one.

During my exam, I found a few 1-mark questions very tricky at the start, so I left all those questions to solve later. I came back to them after solving the questions I was sure about.

Survanshu Saxena: Nothing is tough if you are well prepared. I panicked during the exam when I found some difficult questions at the very start of the paper. However, I was prepared for it so I just skipped them and went on to solve the easy ones as well as the ones I was sure of. At the end of the exam, I found that I have only left four 1-mark questions; the rest of the questions I had solved.

Careers360:.Any advice for the future aspirants?

Survanshu Saxena: There are some points which I want to share:

GATE Paper/Exam Analysis 2021 - Candidates will be able to che...

Hi,i am shushank i am in 2nd year of btech, did i can go australia through gate exam

Sorry dear but through GATE examination you can't go in Australia. But in above you didn't mention why you want to go Australia. If you want to go for higher study like MBA or Mtech then there another examination occurred. You can apply for it and send your CV Australia Universities then if they select you, you can admission there. But if you want to getting job there then I'll suggest you that you can work in India some companies which is connected with abroad like Australia. Then if you work hard in 1year or more than that or less than that time if you have potential company give you international project so you can go Australia dear.

IS IT POSSIBLE TO DO MTECH VIA GATE AFTER MBA ????

you can M. Tech after MBA if you full fill eligibility criteria for M. Tech. GATE is best choice for M.Tech.by scoring good marks in GATE entrance exam you can get admission in IIT college for M.tech.

If still have any queries than please post your queries our experts definitely help you.

Hi, Good evening, I will complete my btech in Computer science in the year 2023. Please can you suggest some best international colleges with good scholarships and which will look at the gate score? Thank you.

These foreign universities admit only those Indian students who have cleared GATE and scored at least 90 percentile in it.

You must appear for IELTS or TOEFL and obtain a good score to determine their English proficiency. You  should also have a good percentage/CGPA in your bachelor's degree course.

Admission process may vary from college to college.

You can refer to this link for more information.

Can any GATE aspirant tell me that questions related to Curve Tracing and Area comes in GATE paper ?

Please visit the link link below you can find out more information about exam Gate examination pattern.

If still have any queries than please post your queries our experts definitely help you.