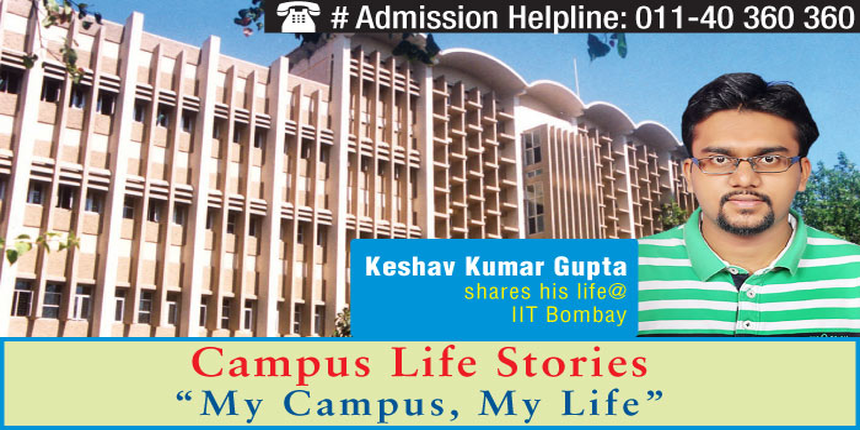 For an engineering aspirant, studying in one of the top IITs is a matter of pride as well as joy. Top IITs promise to strengthen the academic base of students, apart from offering an amazing campus life to them. One such example is of IIT Bombay, which is undoubtedly among the most prestigious engineering institutes of India that is popular for its exciting campus life as well.

As part of its series, Careers360 brings you an exciting close-up view of IIT Bombay. Keshav Kumar Gupta, who is a student of Metallurgical Engineering and Materials Science, takes you on a tour of his campus through photographs and descriptions.

Careers360: How is the campus life, is it all packed up in a routine or equally divided between fun and study? What is the best thing about your campus, something that differentiates it from the others?

Keshav: Campus life gives us complete freedom to either pack it up in routine filled with activities we choose to do, that might be fun, or the activities we wish to do for our own growth. Here, at IIT Bombay, there are diverse peer groups that team up to innovate in any field be it technical, cultural or social service. This is what I believe differentiates our campus from others. I have hometown friends in variety of other colleges like NIT, Medical, Commerce, local engineering colleges, and this is what I believe they do not get in their college life, which is utmost important for development of students.

Careers360: How adequately the students divide academic and non-academic activities at the campus? What about the participation in societies/ conferences and events? Do students contribute in the magazines?

Keshav: Academic Activities: These activities varyfrom student to student as per their priorities. I have batch mates, who devote almost all their time studying for academic courses and rest of the time making academic projects to build profile for higher technical education. At the same time, there are students, who hardly study even during the exams.

Non-Academic Activities (participation in Societies/ Conferences & Events): Amount of involvement in non-academic activities is majorly decided by in what and how much a particular student is interested. Almost all non-academic activities have a very friendly and encouraging culture for students. This is the best aspect about IIT Bombay when compared with other IITs. I have heard from some friends at IIT Roorkee that a student can join a particular club only if he/she has the required basic skills. For instance, writing skills are checked before admission into journalism club. I believe that this approach defeats the very purpose of clubs, and fortunately this is not the case with IIT-B.

Culture for journalism here is also at quite a good level with institute bodies like Insight, whose articles have been used by national newspaper. Similar bodies are also present at department level.

Careers360: Is there any code language or may be few slangs that are famous and used here among the students?

Keshav: Yes, there are few slangs that are frequently used at IIT Bombay. Some of them are-

Machaya/Craxxx – Be successful in something

Careers360: Is there an informal grapevine communication that tells the campus students about the gossips or the latest happenings? Tell us something secretive about the campus, a leak perhaps which when others will read might get stunned.

Keshav: IIT Bombayhas its owninstitute magazine for which Insight play the major part. Though students here in general are fortunately, I would say, are less interested in gossips. Institute community, I believe, truly lives upto the saying - ‘Great people discuss ideas and not people’. As far as gossiping is concerned, social media play that part very well.

Something that might stun others is that we IITians don’t study at all. This is just a stereotype that IITians study day and night. Making an impact in today’s world requires skills and efforts, not just academic studies.

Careers360: What do you do when you are not studying or not attending the classes? Do you go to library? What do you do there apart from reading books?

Keshav: That’s basically asking what I do for the whole day. Just like other students, I am involved in non-academic activities of my choice, i.e. social service inclined groups. The only time we go to library is either to get books just for the sake of it or to study during exams when hostel becomes too distracting to do that.

Careers360: What has been the most recent news or event that has happened in your campus? Does your campus have any annual fest? Please tell us about it.

Keshav: Recent news about IIT Bombay is that three out 16 ‘100 percentilers’ in CAT 2014 are from our college.

IIT Bombay has so many Annual Fests. Mood Indigo, Tech-fest, Abhyuday and E-Summit are from across the four major departments of non-academic activities- cultural, technical, social-service and entrepreneurship respectively.

Careers360: There are always normal hangouts and few special hangouts like boys’ secret corridors or other corner. Mention all to us.

Keshav: Top floor of any hostel is very popular among all students here. Other hangouts include GG building and boat house.

Careers360: Any liberty that students demand from the academic authorities, might be any additions or removal of few rules?

Keshav: Only thing we want isthat there should not beFRs (fail no one). All other rules are already quite well and have feedback systems in place to change them as and when required. No FRs is the only utopian demand left to make.

Careers360: What are the best fun activities that happen in the Boys/Girls hostel, especially in the nights? Any pranks, games or may be just running around that is loved by all and adds a life to the hostel?

Keshav: IIT Bombay is full of fun and enthusiasm. Giving birthday bumps at midnight is one of the fun activities in which we all participate.

Careers360: Are there any Inter-engineering college competitions, sports activities or any other events? What are the main attractions and buzz about them?

Keshav: Inter-college competition for sports and inter IIT competition for cultural & technical departments are held on regular basis. Winning for our college is the highest motivation for students.

Careers360: Do you have any Facebook page of your campus where the students express their views or jokes or ideas, or maybe even a blog where students write about their experience of Life at Campus?

Keshav: It is dynamic as many Facebook pages and groups come up and die down. It is all about what clicks to the students at that particular time.

Hello.
Salary per month depends upon your skills whether you do your engineering from IIT Bombay or from any tier 3 college yes it is true that most of the student get very highest package from IIT Bombay sometimes you have already been heard that someone got CRORE  package but it's true  in one sound actually this package is offered by the foreign companies and after conversion of currency in Indian rupees it is of crore the highest package vary from 24 lakh to 30 lakh in IIT Bombay offered in India.
Yes it is also true that IIT Bombay provides 100% placement because there is no scanty of companies in this, if you do hard work then you definitely will get best company and your salary would lie between 20 lakh to 30 lakh per annum.
Best of luck.
Read More
Answer
Answer Later
Report