TS EAMCET 2018 Topper Interview: Being among the top rankers is like a dream come true as one is elated to accomplish success after consistently working hard. Fulfilling the dreams of his father and grandfather, TS EAMCET Topper 2018 (AIR 5) Sanikommu Madhan Mohan Reddy, attributes his success to consistent hard work, proper time management among other factors. 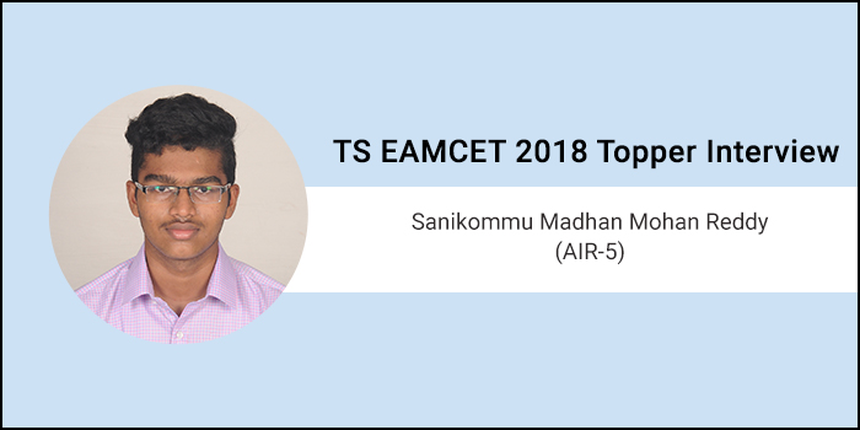 He advises that students can perform well if they don’t take stress and study thoroughly from the right books. The road to success for Madhan Mohan Reddy was a long one as he commenced his preparation by joining the coaching centre when he was in class eight. His success is not limited to TS EAMCET but extends to AP EAMCET where he scored AIR-14 and JEE Main in which he secured 94th rank. In an interview to Careers360, Sanikommu Madhan Mohan Reddy talks about his success journey, travails faced during preparation, as well as his TS EAMCET exam experience. Read the complete interview which is given below.

Careers360: Congratulations for your outstanding performance in TS EAMCET! What was your reaction upon knowing your rank?\

Sanikommu Madhan Mohan Reddy: Actually TS EAMCET result 2018 was released a day before the JEE Advanced 2018 exam was to be held. When the TS EAMCET result was announced, I was talking to my physics lecturer. I was not thinking much about my rank. In AP EAMCET 2018, I was expecting a rank below 10. However, I secured 14th rank. I was extremely disappointed. When I got the news that I had got 5th rank in TS EAMCET 2018, I was very happy.

Sanikommu Madhan Mohan Reddy: I completed my schooling from Kennedy English Medium affiliated to CBSE board. I enrolled for IIT-JEE coaching when I was in class eight. I have been taking coaching since then.

Sanikommu Madhan Mohan Reddy: My combined score is 94.763 while my TS EAMCET marks are 148. 93. I secured the fifth rank in the exam and I belong to general category.

Careers360: Did you also appear for AP EAMCET? What was your score and rank in AP EAMCET?

Sanikommu Madhan Mohan Reddy: Yes I did appear in AP EAMCET 2018 where I secured the 14th rank.

Sanikommu Madhan Mohan Reddy: It was my father's and grandfather’s wish that I should become an engineer. I am interested in CSE. I wish to join one of the leading IITs.

Careers360: When did you start your TS EAMCET preparation? Tell us something about your preparation strategy and daily routine for TS EAMCET?

Sanikommu Madhan Mohan Reddy: There was no separate preparation for TS EAMCET. A day before the exam, I was appearing for JEE Advanced mock test which was conducted by the coaching institute. My AP EAMCET preparation helped me score well in TS EAMCET 2018 as the topics are similar. The short notes which I prepared helped me to quickly revise the topics in which I was weak.

Careers360: Was there a difference in the preparation strategy in the last months of TS EAMCET considering that the board exams also are during this period? How did you manage preparation for both?

Sanikommu Madhan Mohan Reddy: It is important to get good marks in the board exams. I was completely involved in the preparation of my board exams as my JEE preparation had been going on for a long time.

Careers360: Did you take coaching for TS EAMCET and if yes from where? What are the benefits of coaching according to you?

Sanikommu Madhan Mohan Reddy: I took coaching for IIT JEE and this helped me in my preparation for TS EAMCET also. Coaching was of immense help to me as the guidance provided by my lecturers played a key role in my success

Careers360: The exam went online this year? What did you feel about it?

Sanikommu Madhan Mohan Reddy: I wrote a couple of online tests and there were no technical problems as such. However, on the day of the exam, there were technical problems and the mouse gave me problems as scroll button stopped working. The questions were quite lengthy. Since the paper was in two languages and we had to scroll up and down for each question, this resulted in wastage of our time. One more thing was that adequate rough sheets were not provided.

Sanikommu Madhan Mohan Reddy: I merely solved a couple of TS EAMCET sample papers which were prepared by our institutions. I did not take the mock tests that were released by the exam conducting body. This year's paper was very different from the previous papers so practicing from these papers and expecting a paper on similar lines may have been disappointing.

Careers360: Are there any special books that you feel have helped with your TS EAMCET preparation? Are the school text books adequate for preparing for TS EAMCET and Class XII?

Sanikommu Madhan Mohan Reddy: The board books are adequate for preparation.

Careers360: Did you face any problem during the TS EAMCET examination? Which subject was the easiest and which was the toughest? What do you think is a tough thing to manage during the exam?

Sanikommu Madhan Mohan Reddy: Yes, managing time was a difficult task. Maths paper was lengthy. It is common to panic when you have a lengthy paper and you aim to solve the whole paper on time. Panicking may result in incorrect answers for questions that may otherwise be easily answered. So that is a crucial thing to keep in mind.

Careers360: What do you think are the key factors behind your stupendous success in TS EAMCET?

Sanikommu Madhan Mohan Reddy: Correct time management, a quick presence of mind, helped me to perform well in the exam.

Sanikommu Madhan Mohan Reddy: I used to talk to my Physics lecturer, who used to help me solve many of my problems. I did not take any stress as I love the subjects and like studying them. There were times when I used to sit in isolation and think about the ways to overcome and improve my weak areas so that I can perform well.

Careers360: You know you are an inspiration to thousands of students across the country. Do you have any message for future aspirants on tackling the TS EAMCET exam?

Sanikommu Madhan Mohan Reddy: Be yourself. Remember not to take excess stress on yourself as it only harms. Have faith in yourself and be confident. This is important to crack the exam with success.

Hope, this answer helps you.

For more information check the below link

Hope this answer helps you.

All the best!!!!!
Read More
Answer