West Bengal Joint Entrance Examination Board (WBJEEB) has preponed the admit card date of West Bengal Joint Entrance Exam (WBJEE) 2017 by 2 days. As per WBJEEB officials, WBJEE 2017 admit card will now be made available from April 10 (2 pm onwards). The admit card for the state level engineering entrance test will be available in online mode. Earlier, the admit card of WBJEE 2017 was scheduled to be available from April 12. In order to download their admit card, the registered applicants have to enter their application number, password and date of birth which they have entered during the registration and application submission procedure. 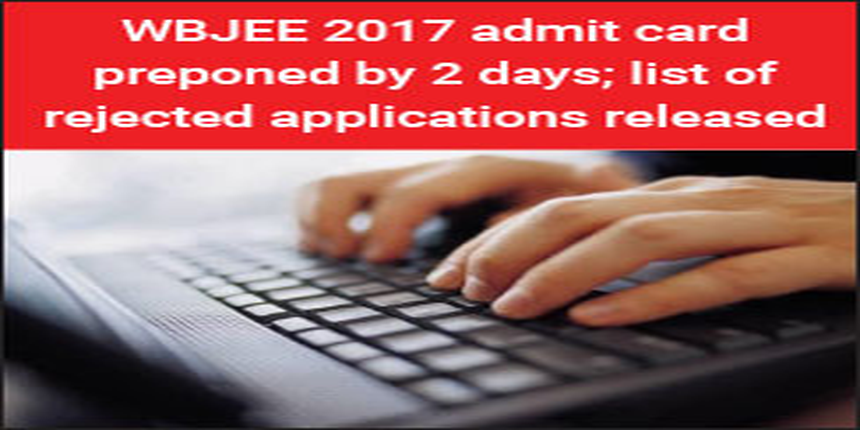 Apart from the revised dates for the availability of WBJEE admit card 2017, the exam conducting authority has also released a list of applicants along with their application numbers whose application forms have been rejected owing to not following the specifications prescribed by WBJEEB.

According to the latest notification released by the board, “Admit Cards can not be generated for the candidates who did not upload scanned images of their photograph/signature/thumb impression as prescribed in the information bulletin.”

Click Here to check the list of rejected applications. Admit card for such applicants will not be available.

This means that the list includes names and application numbers of the candidates who are not considered eligible for appearing in WBJEE 2017 owing to the submission of incorrect application forms.

The entrance exam, WBJEE 2017, will be conducted by WBJEEB in offline mode on April 23. Over 1.27 lakh candidates apply for the state level engineering entrance examination every year for admissions to B.Tech/B.E. programmes available in the participating institutes of WBJEE 2017.

Keep tuned to engineering.careers360.com for more news and updates on WBJEE Admit Card 2017.

WBJEE 2021 marks vs rank give details about the rank correspon...

WBJEE Admit Card 2021 - Candidates will be able to download WB...

This is a bit difficult to predict the marks  required in WBJEE mains to get a seat in jadavpur university  as cut off rank keeps changing every year  depending upon various factors like  number of students that appeared in the exam, kind of marks obtained by them , toughness level of the WBJEE examination , number of seats available for the branch you want etc.

When we go through previous year trend then ,

In wbjee 2019 , 107 was the cutoff rank for general category to get a seat in Jadavpur University for BTech in computer science

So, to be on the safer side try to get at least around 190 marks in order to get into computer science in Jadavpur University

Now,
limited time is left for wbjee 2021 , so focus on your preparation, to prepare well your jee examination, go through chapters first and your focus should be on grasping concepts , practising questions and then revising them, go through mock test paper sample papers and previous year question papers as it will let you know your preparation level and and weak areas so that you can work on them and perform well in your wbjee examination.

If you have any other doubt then you can always reach us to clear them :) we are always available to help you out and guide you

does application forms for WBJEE 2021 released?

Further for more details check out the link given below ,

After the release of application form you can follow the complete application process as described below :-

For complete details and live updates about WBJEE 2021 Application form kindly visit the link given below :-

As of now there has been no updates regarding exam form but WBJEEB will release the application form of WBJEE 2021 tentatively in last week of January 2021. So i will suggest you to keep checking the official website ie , wbjeeb.in. to know the latest information or check the link given below to know more -

The eligibility criteria for pursuing B.pharmacy is as follows:

For more information use the link: