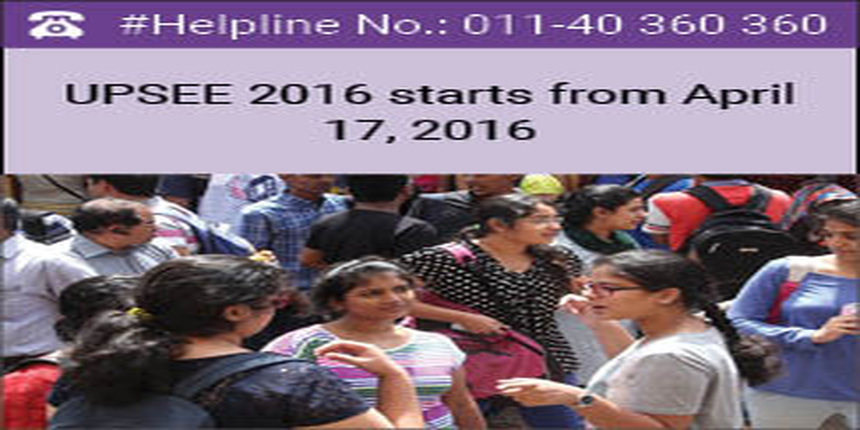 It is expected that nearly two lakh students may appear in the offline test of UPSEE 2016. AKTU, the examination authority is conducting the entrance exam in 8 other centres (in other states) apart from 40 centres in Uttar Pradesh. In 2015, the exam was held in two modes i.e. offline and online.

The Answer Key of UPSEE 2016 has been published on April 17, 2016 by th exam conducting authority. Earlier, AKTU had announced that the asnwer key of UPSEE 2016 along with the result will be available on or before April 30, 2016 and counselling for admission will begin in the third week of June 2016.

In 2015, over 1.8 lakh candidates appeared for UPSEE that was conducted in offline mode at different centres across 26 cities in Uttar Pradesh. The exam was conducted for admission to around 1.5 lakh engineering seats including around 4,000 government college seats across Uttar Pradesh. Majority of the students last year found UPSEE paper to be of moderate level with Chemistry being the toughest section of the exam. According to the examinees in 2015, Physics was difficult and Mathematics was the easiest among the three sections.

Stay tuned to engineering.careers360 for more news and updates on UPSEE 2016.

UPSEE Counselling 2020 will be conducted online tentatively from fourth week of June. During UPSE...

UPSEE Exam Centres 2020 - Candidates can check all details about the examination venue through UP...

UPSEE participating institutes 2020 are the list of colleges situated within the territory of U.P...

View All News and Articles
Have a question related to B.H.M.C.T. ?

Know all about UPSEE

Your UPSEE brochure has been successfully mailed to your registered email id .