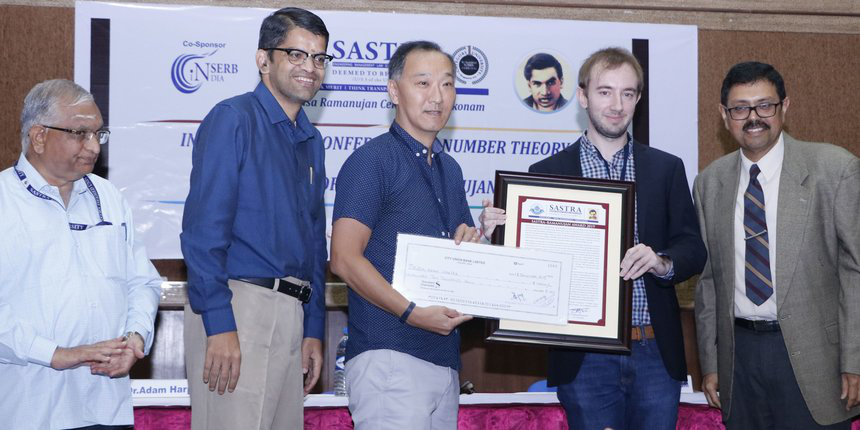 Prof.Krishnaswami Alladi, Department Chair of Mathematics at the University of Florida and the Chairman of the SASTRA-Ramanujan Award Committee said that “This confirms the prestige of the prize as a journal with a hallowed tradition that published Isaac Newton’s early papers has chosen to publish about the SASTRA-Ramanujan Award winners”. Alladi presented the paper at the Royal Society event as its author. Alladi also added that the award has gained global reputation with four of its previous winners winning the Fields Medal.

This award of the SASTRA University was presented to Adam Harper of the University of Warwick for the year 2019 . He was awarded for his outstanding contributions to probabilistic number theory. The award carries a cash prize of USD10,000 and a citation which was presented by Prof.Ken Ono, the vice-President of the American Mathematical Society. While presenting the award, Ono recalled that Harper was a Ph.D. student of Prof. Ben Green at the University of Cambridge and Green was the winner of the award in 2007. Similarly, the 2005 award winner Kannan Soundarrajan’s student won the award in 2017.

Also, Dr.Harper will deliver a Commemorative Lecture on the occasion of the Ramanujan's Birthday at SASTRA campus in Kumbakonam. He will also participate in the International Conference on Number Theory which will have speakers from the USA, UK, Canada and India. Harper will be delivering scientific talks to over 150 delegates from all over the country in the event.

SASTRA announces “SASTRA-CNR Rao Labs” for STEM in schools of ...

SASTRA University has commenced the application process for B....

SASTRA Deemed to be University to conduct free Online Practice...

SASTRA Deemed to be University will conduct an Online Practice...

SASTRA University has revised its 10 year Admission Policy to ...

i got 9.25 gpa in inter second year boards. and 91.658 percentile in jee mains january attempt. is there any chance to get cse or ece in sastra university?

Admission in Sastra University for B.Tech and Integrated M.Tech course is done on two modes

You have a very good percentile in both +2 and Jee Mains. You have a good chance to get admission in your desired department. Best of Luck.

i got 9.25 gpa inter second year and 91.65 percentile in jee mains january attempt . can i get a good branch in sastra university?

Based on your percentile score you can definitely get a good branch in Sastra University. But, still I will mention a few best colleges for you acvording to your score-

Could you please tell me when SASTRA university declares its merit list for b-tech admissions 2020?

I got 60% in mains and 84% in MPC in board exam can i get seat in sastra university in chemical engineering ?

Normalised percentage of board would be as follows

If someone is a topper of board exam and his JEE mains score is 40 then final score would be 85 and AIR (SASTRA) would be above 5000 . It proves that t here is no chance for JEE mains score below 40 in stream 1 .

Second criteria includes admission on the basis of boards marks only. But it has only 30% of seats , so for this criteria u should be having 95 or 95+ for securing your seat as in this criteria competition may be very tough.

(Note:- merit list of both criteria is prepared diffrently .)

Which college is better SASTRA UNIVERSITY OR NIT ANDHRA PRADESH?

If you don't have budget of around 10 lakhs then go for SASTRA UNIVERSITY otherwise NIT andra Pradrsh is better, the tag of NIT will greatly help you and the hostel faculty of SASTRA according to my sources , but it mainly depends on your efforts in University not the University, if you do enough online courses as well as interships like campus ambassador and other in college activities ,nice academics record that would be enough for you to get excellent placement

Your Shanmugha Arts Science Technology Research and Academy, Thanjavur brochure has been successfully mailed to your registered email id .