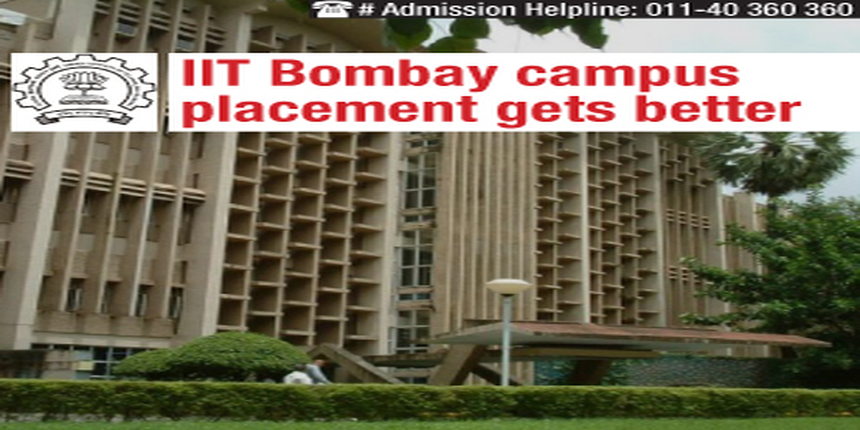 Placements showed better pace this year at IIT Bombay compared to last years’ numbers, with around 1,220 job offers made by more than 350 companies in the last 12 days of this campus placement season.

The number of jobs offered this year at IIT Bombay in just 12 days this year is higher than the total jobs offered in first 18 days last year, IIT officials said.

Premium Help-Talk to our expert counsellors to explore the best suitable colleges and branches you can get based on your JEE Advanced rank/score on 011-40360360 (Paid Service).

Among the total jobs offered till December 12, as many as 908 were accepted by students, says IIT Bombay placement official. Last year, as many as 895 placements were made till 18th day of campus placement season in the premium institution.

While E-commerce and start-ups were the top recruiters this season, Core Engineering jobs were the top choice by 1,664 students who registered for placements this year. The total number of final year students, including B.Tech and M.Tech, is around 1,800 students in the campus, officials said.

“We have seen a rise in number of hires by E-Commerce and startups. Core engineering/manufacturing firms were promoted and in response, they also recruited in large numbers. Increase in number of students opting for core engineering sector jobs clearly states the opposite. Students prefer a job where they can gain diversified learning experience with freedom to implement their own initiatives and opportunities to switch roles within the firm itself,” he says.

“This year we worked in line with the Government of India initiative of revival in manufacturing with its ‘Make in India’ campaign and had given preference to core engineering companies,” he says.

Besides, IIT Bombay is providing a conducive environment for start-ups to its students with its incubation center – Society for Innovation and Entrepreneurship (SINE).

“We have our own incubation center – SINE – which fosters the growth of newly originated startups. Apart from SINE, we have entrepreneurship cell which conducts year long sessions and competitions to provide platform for them to grow,” he says.

However, if this new crop of entrepreneurs fails to make a mark, doors for campus placement are open for them in near future, says the official.

“A student can opt for deferred placements, in which, he/she is allowed to work on his own venture for two years and if it doesn't work out then they have an option to register for campus placement in forthcoming year,” says Banthia.

Stay tuned to engineering.careers360.com for more news and articles on IIT Placements

880 students get offers from top recruiters at IIT-Madras

how to get admission in bombay iit

IIT BOMBAY is one of the premium institutions of India .

To get admission  in IIT B , you need to get a rank under 300 (All India Rank) at JEE ADVANCED.

Here is the link from where you can check the previous year cut-offs of IIT-B:

You need to crack the GATE examination .

You need to crack the JAM examination on your Respective subject.

You can visit their Official Website to get more information regarding their admissions.