“The most successful people in the end are those whose success is the result of steady accretion” - Akhil Jain the JEE Main topper from Rajasthan is a clear example of how one can conquer any milestone if they have eyes on the goal and hard work is their path to success. The 18 year boy is one among the 9 students who scored 100 percentile in the JEE 2020 examination conducted by the National Testing Agency (NTA) from January 6 to 9. Akhil is not the one who runs at a higher pace, instead, he believes in moving slowly but concretely from one stage to another. In the era of modernisation, where the youth is fascinated towards the social media, Akhil Jain, one of the toppers of JEE Main 2020 January session has prefered books over social media. Currently, he has decided to only focus on JEE Advanced, which will be held on May 17, rather than celebrating the JEE Main January 2020 success. JEE topper Akhil Jain will also be appearing for BITSAT 2020, which will begin from May 16 to 25. 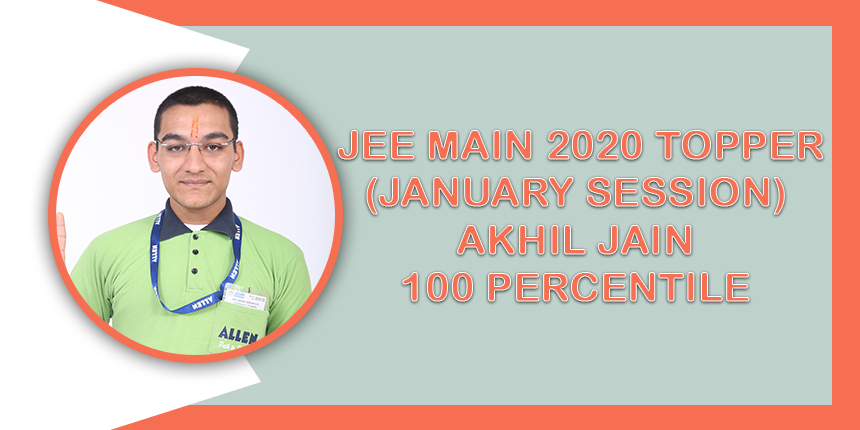 Coming from a business family, the Kota topper is the first from his family to pursue engineering as a career. Jain is a scholar from his school life and remained topper throughout his academic careers. It is his love for Physics and Mathematics that inclined him towards engineering. Earlier, he wanted to become a scientist but later it was shifted towards engineering. For students facing problems in balancing their preparations for both Boards and JEE Mains, in his interview Jain said that, “There is not much difference between the preparations of both these exams. You need to thoroughly read NCERT books. The only difference is that JEE preparation demands more in-depth reading and analysing”. Alike experts, Akhil advised every upcoming JEE aspirant to read NCERT thoroughly for the preparations.

It should be noted that the JEE Main April session will be conducted on April 5, 7 to 9 and 11, 2020. JEE Mains registration for April sessions will begin from February 7 to March 7, 2020.

can I get admission in jadavpur university Kolkata through the result of jee mains ????

Hello,
No, Jadavpur University, Kolkata doesn't accept JEE main score for admission to undergraduate Engineering courses. It accepts WBJEE score and  the admission is based on merit in WBJEE. The eligibility criteria is that a candidate must have passed 10+2 with Mathematics, Physics and Chemistry/Biotechnology/Biology/Computer Science/Computer Application from a recognised board. Candidates belonging to general category must have scored 45% marks and for reserved categories it is 40% marks. Candidates must have passed in English with at least 30% marks\.
Read More
Answer

got 95.6 percentile in JEE mains 2020 but got less than 75 percent in board. which college and branch can l get in for btech?

You can apply for good private universities or institutes who are taking their own entrance exam and having their own admission criteria like:

i am a JEE ASPIRANT although I am good at concepts in mathematics I amnt good at solving problems , I need to solve in a level wise I mean the hardness level can u suggest me some good books ..so that I a can download it if possible plz send me link to download, this would help

First make a schedule and set fixed hours for solving various mathematical problems every day. Start with NCERTs as all the important topics are covered here easily. Then move on to other books like RD Sharma, Co-ordinate Geometry by SL Loney, Differential and Integral Calculus by Arihant etc. You can get Solutions of the examples in Higher algebra by Hall and Knight on Google Play Books. Don't use a lot of books. Write down all the formulas in a note book so that you can get it easily. http://engineering.careers360.com/articles/jee-main-preparation-tips-for-maths
Read More
Answer


Yes..you can..Everything is possible if one puts hardwork and determination for the goal.
Now coming to the practical process, since you have mentioned that your class 11th is weak,so i am assuming that didn't pay much attention to your studies in class 11th.Beforebgoing further into the preparation the first and foremost thing you need to do is to go back into the chapters of class 11th and study what you have missed because getting good score in JEE, you basic concepts and understanding should be very clear.Give 2 months to the class 11th portion and complete it full-fledged. After that you will be set for class 12th, now start with NCERTs and then move to the standard books.
Divide time equally for every subject or based on your preference.Devote 10-12 hours daily and note that daily means everyday because consistency is the key..you can take 1 days off after 6 days of dedicated studying.
After completing 50% syllabus, start solving previous year JEE question papers and jot down your weak and strong areas and work on it accordingly.
After completing the syllabus,give lot of mock tests honestly and analyze them afterwards.
Be positive during the preparation and take care of your mental and physical health.
Be honest with yourself and give your best everyday.

How to get top10 rank in jee advanced if I start preperation from the remaining months ? New answer needed

Getting top 10 in JEE ADVANCED with a few months preparation is a very difficult task infact it is almost impossible. But, if you really want to crack JEE ADVANCED then I would highly suggest you to drop a year and work really hard on your problem solving skills and be crystal clear with your concepts.