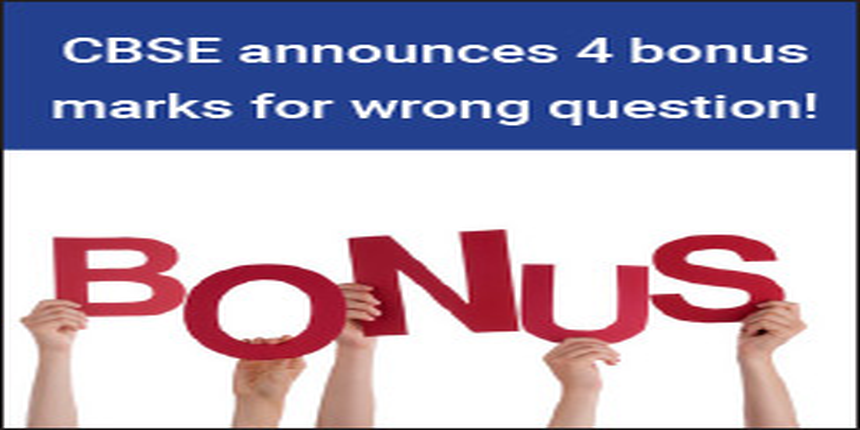 CBSE has just released the JEE Main 2017 Answer Key for Paper 1 again on April 27. A closer look at this answer key shows that CBSE has awarded 4 bonus marks for a question whose answer was 9 in the JEE Main exam. This question pertains to the offline question paper that was held by CBSE on April 2, 2017. All candidates have been awarded this bonus marks. It is unclear at this stage which question was deemed wrong. Check the details of the new Answer Key of JEE Main that has been published again on the website.

The Answer Key earlier was announced on April 18 and candidates were allowed time till April 22 to challenge the answer keys announced then. Some candidates did send their objections. However CBSE has given a clarification on April 27 with the new answer key of JEE Main proclaiming the awarding of 4 bonus marks.

According to reports the question is in Mathematics and can be checked below:

The result along with the score and rank of the candidates has been announced by CBSE on April 27, 2017 in the afternoon. After a series of glitches, candidates could finally access their JEE Main 2017 results by late afternoon.

Kalpit Veerwal has secured a perfect 360/360 in JEE Main thus securing the first rank and creating JEE Main history. Vrunda Rathi is the topper amongst the female candidates with AIR 71.

Keep tuned to engineering.careers360.com for all the latest updates on JEE Main 2017

Know the JoSAA 2020 rank list according to various categories of candidates and other information...

JMI B.Tech Counselling 2020 - Candidates will be able to apply for JMI B.Tech 2020 counselling in...

I have previous year (2019) coaching material of ALLEN and other coaching instiutes that I found online. Are they still useful for JEE MAINS 2021 and JEE ADVANCED 2021?

Yes coaching Materials are quite useful for JEE MAINS and ADVANCED specially for JEE ADVANCED, you can use them for JEE 2021 as the coaching changes very less of their questions in their material most of their questions remains same every year, along with you should also practice the JEE 2020 questions for more grip on the syllabus.
Read More
Answer
Answer Later
Report
2 Views

I have previous year (2019) coaching material from ALLEN and other institues. Should I use them? Are they effective for JEE MAINS 2021 and JEE ADVANCED 2021?

See the syllabus for every year for JEE Main is same for each and every year,if changes come there will be very slight change like addistion of topic or removal of some small topics.So YES,you can use them as the Allen is one of the best coaching centers in India for preparation of JEE MAIN,JEE ADVANCE they will be effective definitely but if you can use them completely like solve each and every question,remember the questions very well,know the concepts of that question.

Hope this will help,please feel free to ask if you have any further queries.

when will the result of WB jee be declared?

The tentative date for WBJEE results is March'20 which will be declared in online mode at wbjeeb.nic.in. Answer key for the conducted exam has already been released.

You can also stay updated at https://engineering.careers360.com/articles/wbjee

can i get in bit sindri college in any branch with jee main percentile of 87 and having jharkhand domicile?

Hello, i am also a student of BIT Sindri and last year cutoff was around 91 percentile for General catogory but last year JECEB announced later after JEE Mains April that it will not take any exam and admission to different college of jharkhand including BIT SINDRI will take place through JEE MAINS so some students who didn't gave JEE MAINS were not able to apply, this year everybody knows that admission will take place through JEE MAINS so cutoff will some what increase around 92 percentile for General catogory, but if you belong to SC or SC Catogory then surely you will get admission.
Read More
Answer
Answer Later
Report
18 Views

Application form for jee main April examination starts from 07th of February and shall remain open till 07th of March 2020.