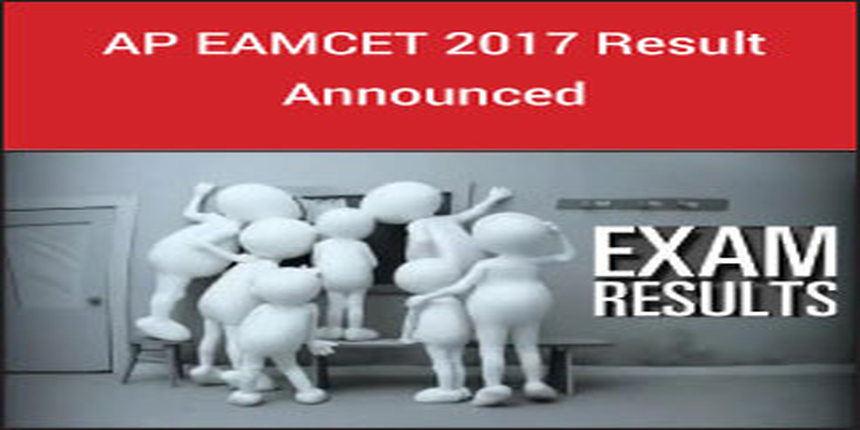 Jawaharlal Nehru Technological University (JNTU) has declared the result of AP EAMCET 2017 online. The candidates who had appeared for the entrance examination, which was held from April 24 to April 27, 2017, will be able to access their result and check their scores as well as their ranks. The ranks will also be sent to the candidates through SMS within half and hour of the declaration. The rank cards will be available from May 12, 2017. The counselling session will be conducted by JNTU tentatively on June 2017 and all qualified candidates will be called in for allotment of seats according to their secured AP EAMCET ranks. AP EAMCET 2017 will be offering 1,53,150 seats in the participating 17 Government colleges and 305 Private colleges.

Step 1 – To access the AP EAMCET Result 2017, the candidates will have to submit the required credentials – registration number and date of birth

Step 2 – The result of AP EAMCET 2017 will be generated on the screen after the submission of the credentials.

Step 3 – The candidates are advised to download and print the result for future use.

Track the latest news at https://www.engineering.careers360.com/

AP EAMCET exam centres 2020 is the cities where entrance test for admission in B.Tech will be con...

AP EAMCET Eligibility Criteria 2020 - Candidates can check the detailed eligibility criteria of A...

please send me a link to apply ap EAMCET ?

AP EAMCET is conducted by JNTU, Kakinada to grant admissions to students into engineering, agricultural and pharmacy courses offered by colleges in Andhra Pradesh. Candidates who wish to appear for the examination may apply online from the official website of apeamcet. The link for the same is given below:

The thing you have mentioned in your questions comes under domicile requirement but as per the eligibility criteria the candidate must have completed there 12 th board from Board of Intermediate Education, Andhra Pradesh/ Telangana with a minimum aggregate of 45% for GEN and 40% for Reserved category.

For more information you can refer this link:


You can get equally good college from any of these exams.Both KCET and AP EAMCET offer wide range of college in the state of karnataka and andhra pradesh respectively.You should have in AP EAMCET you are from Andhra Pradesh and if you are from Karnataka then go for KCET.

is discontinued student again apply for eamcet? is reimbursement is applicable?

Hello,
Yes, you are eligible to appear in AP EAMCET as there is no limit for number of attempts.But the upper age limit is 22 years as on December 31,2020 for General category candidates and for SC/ST the upper age limit is 25 years.Minimum age required is 17 years.
And you will get fee reimbursement if you belong to SC/ST category whose annual income is less that 2.5 lakhs.And for BC, EWS, disabled candidates the annual income limit is one lakh.
So if you fulfill the above eligibility criteria you are eligible.
Read More
Answer
Answer Later
Report
11 Views

Hi, Is NEET qualification mandatory in order to apply for AP EAMCET Exam ? Or can I get an MBBS seat in Andhra Pradesh if I just qualify the EAMCET ?

Hello,
You don't need to appear in AP EAMCET to get seat in MBBS in Andhra Pradesh.Your admission in MBBS is done based on merit in NEET UG.You need to participate in state counselling of Andhra Pradesh.Dr. NTR University of health sciences, (NTRUHS), Vijayawada will conduct the counseling for 85% state quota seats in AP.
You have to apply for the counseling separately.The application form will be available from June last week of 2020.
Read More
Answer
Answer Later
Report