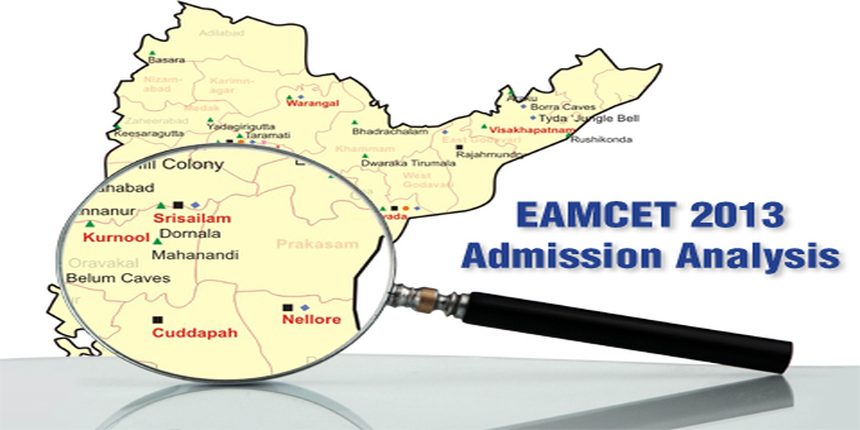 The EAMCET 2013 Counselling was postponed for over 2 months and faced various issues with execution once it started because of ongoing tension in the State of Andhra Pradesh. The EAMCET Certificate Verification process 2013 is over and the EAMCET Web Counselling 2013 will also get over this week.

Telangana region is expected to be the worst hit region because of the deficit of students. The region is already facing tensions because of the political situations existing in the region and the state and this blow in Engineering admissions is not going to ease up the situation. Click here to read the article on Brain Drain from Telangana Region.

For this region, 61000 students have attended the counselling this year for admission to 313 engineering colleges affiliated to JNTU-Hyderabad. Total Number of seats are around 1.65 lakhs. Nine colleges from this region have already closed down post approvals from AICTE (All India Council of Technical Education).

Now in the Andhra Region which falls under JNTU-K university, it has 201 colleges listed under it. Approximately 1.01 lakh seats in engineering streams are there for this region and the affiliating university.

Whereas The Rayalaseema region falls under JNTU-Anantpur and 118 engineering colleges are listed under the university. A total of around 60,000 seats is there in this region.

The same percentage can be expected this year too for academic session 2013-2014.

Considering all 3 regions together, there would be many colleges who have got none or very less number of students admitted. And with the ongoing situation, some colleges are expected to be shut down this year itself.

An official said that Some colleges were very few students have taken admission through counselling are expected to shift/transfer their students to some other college for the classroom proceedings. In the mean time, these colleges will be shut down to avoid the investment in teaching and non teaching categories.

Now, again for such colleges, Telangana region is worst hit. Around 40 colleges are expected to remain shut in this region.

Where as in Andhra Region the number is expected to be around 20 and similarly in Rayalaseema region around 10 colleges are expected to remain shut.

We have highlighted it lot of times earlier that this delay has caused serious loss to the State of Andhra Pradesh and lead to the migration of students to the neighboring states like Karnataka, Kerela, Tamil Nadu, Maharashtra and New Delhi . Andhra Pradesh was once considered to be education hub and a hot destination for engineering aspirants but the recent issues have surely decreased that reputation.

Click Here to read the Open Letter to APSCHE Chairman 2013 by Careers360.

If this trend continues, Andhra Pradesh engineering colleges would face serious concerns as even more number of seats may go vacant! This decrease in admission rate must be tackled effectively so that for the coming year, the best possible steps should be taken and proper & timely execution of processes should be done.

AP EAMCET Syllabus 2020 - JNTU Kakinada will be publish the syllabus of AP EAMCET 2020 which can ...

AP EAMCET exam centres 2020 will be the cities where entrance test for admission in B.Tech will b...

what is the best engineering college through Ap eamcet and does it have the best placements??

I will mention the top engineering colleges in Andhra pradesh in which you can get admission through AP EAMCET.

Usually, Private institutions bring more placements but if it is a Govt. Univetsity then it will be more reputed.
For more info regatding top engineering colleges in AP go through this linkhttps://engineering.careers360.com/colleges/ranking/top-engineering-colleges-in-India-accepting-ap-eamcet-score
Read More
Answer
Answer Later
Report
17 Views

Is there age limit for AP EAMCET ?

Is there age eligibility for ap EAMCET?

Hello vamsi krishna!!
A candidate must have completed 17 years of age as on December 31,2020.There is no upper age limit to apply for AP EAMCET.Take a detailed view about the eligibility criteria of AP EAMCET in the link provided:


No, other state students are not eligible to apply for AP EAMCET.
In order to apply you should belong to the state of Telangana or Andhra Pradesh.

To know the full eligibility criteria click on the link below :

what is the age limit for Ap Eamcet

To know more check the link given below