SASTRA University has announced the creation of SASTRA-CNR Rao Labs in honour of the visit of Bharat’s Ratna.CNR Rao to the university campus and celebration of his 80th birthday. The University which was committed to establish the STEM lab facility in around 10 schools of the state has now announced the list of selected 10 schools who will benefit from this facility. 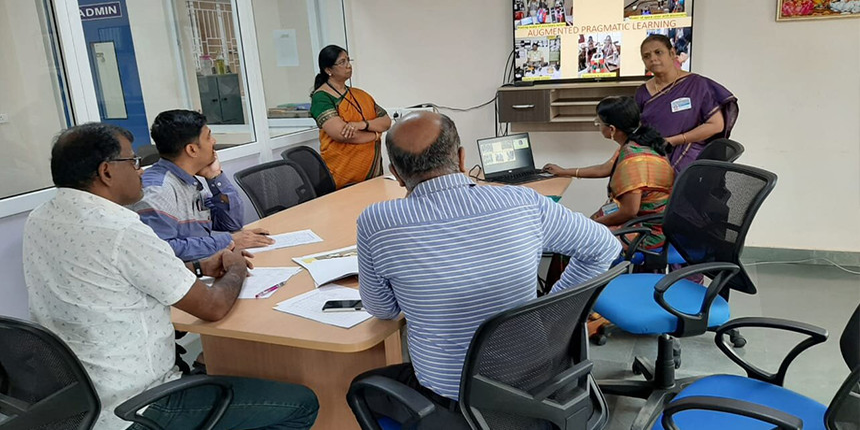 SASTRA has been committed to establish this lab facility in 10 schools at a cost of Rs.5 lac each. It has launched the SASTRA-CNR Rao Lab. initiative to setup the laboratory facility with DIY kits on Robotics, IoT, 3D Printing, AI and Drones. This is to strengthen the science and technology-based learning at the school level. As part of this initiative, SASTRA had announced a competitive proposal submission from all schools all over Tamilnadu. This proposal asked for a detailed presentation on the lab’s objective, outcome and need for STEM.

More than a hundred schools had submitted their proposals and 25 schools were shortlisted to interact and present using the DIY Kits and their school’s vision on STEM. On the basis of the presentation and project proposals by the shortlisted schools at SASTRA Thanjavur Campus on February 28 and March 8, 2020, ten schools were selected. The selection took into consideration the objectives & outcome of this laboratory set up in their respective schools.

These selected schools are from both rural and urban areas. The proposals sent by these schools were evaluated on the requirement and interest level of the teachers and management to utilize this new lab facility by students of class 6 to 12. Few schools have opted to use this lab up to class 9 during the working hours while others have opted to use it as a special but compulsory course for learning and experiencing. Most of the schools were of the consensus that this lab will kindle new ideas and facilitate the students to choose their career fields after class 12.

SASTRA University has commenced the application process for B....

SASTRA-Ramanujan Award of the university has earned recognitio...

SASTRA Deemed to be University to conduct free Online Practice...

SASTRA Deemed to be University will conduct an Online Practice...

SASTRA University has revised its 10 year Admission Policy to ...

i got 9.25 gpa in inter second year boards. and 91.658 percentile in jee mains january attempt. is there any chance to get cse or ece in sastra university?

Admission in Sastra University for B.Tech and Integrated M.Tech course is done on two modes

You have a very good percentile in both +2 and Jee Mains. You have a good chance to get admission in your desired department. Best of Luck.

i got 9.25 gpa inter second year and 91.65 percentile in jee mains january attempt . can i get a good branch in sastra university?

Based on your percentile score you can definitely get a good branch in Sastra University. But, still I will mention a few best colleges for you acvording to your score-

Could you please tell me when SASTRA university declares its merit list for b-tech admissions 2020?

I got 60% in mains and 84% in MPC in board exam can i get seat in sastra university in chemical engineering ?

Normalised percentage of board would be as follows

If someone is a topper of board exam and his JEE mains score is 40 then final score would be 85 and AIR (SASTRA) would be above 5000 . It proves that t here is no chance for JEE mains score below 40 in stream 1 .

Second criteria includes admission on the basis of boards marks only. But it has only 30% of seats , so for this criteria u should be having 95 or 95+ for securing your seat as in this criteria competition may be very tough.

(Note:- merit list of both criteria is prepared diffrently .)

Which college is better SASTRA UNIVERSITY OR NIT ANDHRA PRADESH?

If you don't have budget of around 10 lakhs then go for SASTRA UNIVERSITY otherwise NIT andra Pradrsh is better, the tag of NIT will greatly help you and the hostel faculty of SASTRA according to my sources , but it mainly depends on your efforts in University not the University, if you do enough online courses as well as interships like campus ambassador and other in college activities ,nice academics record that would be enough for you to get excellent placement

Your Shanmugha Arts Science Technology Research and Academy, Thanjavur brochure has been successfully mailed to your registered email id .