In the late 17th century, electricity became a subject of scientific interest with the work of William Gilbert. A number of important discoveries, including the incandescent light bulb and the voltaic pile were made over the next two centuries. Most importantly, the greatest discovery in the field of Power Engineering can be traced back to times of Michael Faraday. According to Michael Faraday, a change in magnetic flux induces an electromotive force in a loop of wire. This principle is known as electromagnetic induction. It helps to explain how generators and transformers work. Since then, power has been proved as lifeblood of any organization. Power is not only required for keeping the lights on but also required for all mechanical, electrical and electronic operations. For effective and efficient generation, delivery, and utilization of electric power, energy remains one of the most challenging and exhilarating fields of electrical engineering. 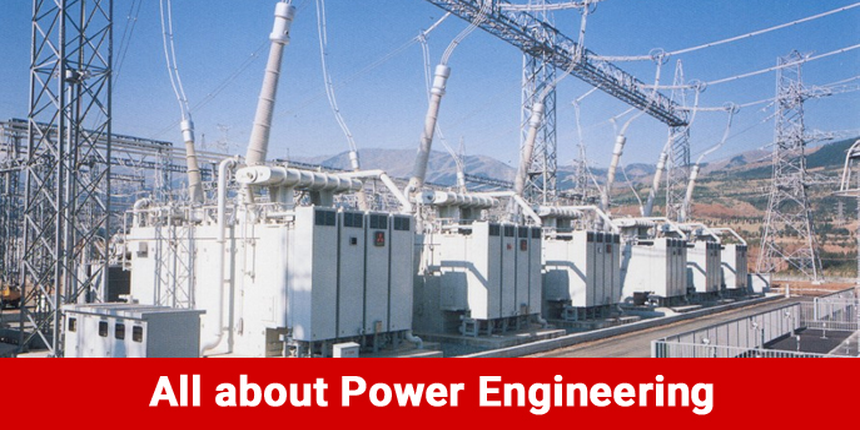 Power Engineering focuses on network of interconnected components for conversion of different forms of energy to electrical energy. Power Engineering has been divided into four main subsystems, including:

Global issues like climate change, scarcity of water and energy have compelled the individuals to take the last resort of electrical energy generated with sustainable technologies. Certified power engineers are highly required for operational management, maintenance, renovation, and repair of boiler systems and other mechanical systems.

Candidates who wish to pursue Power Engineering should have passed Higher Secondary Board Exam from a recognized board in India with aggregate 50 percent marks in Mathematics, Physics and Chemistry.

After completion of B.Tech/BE, one can also opt for M.Tech/MS in various specializations. For M.Tech/MS degree course, candidates are selected on the basis of GATE score. However, candidates with exceptional performance in their qualifying degree are offered direct admission in some institutes. Many engineering colleges also offer M.Tech/MS programme in Power Engineering with different specializations. PhD programmes are another option. The IITs and NITs are among the top premier institutes that offer M.Tech courses in Power Engineering .

Job prospects for Power engineers are growing tremendously. As an emerging economy, India’s power sector is gaining momentum. In terms of electricity generation, India is the 5th largest producer of electricity in the world. For India’s economic growth and development, electricity will continue to remain a key input. By 2016-17, the demand for electricity is likely to reach 155 GW.

India has a huge hydro power potential of 148 GW. To revive hydro power segment, the Government of India has introduced Hydropower Purchase Obligation (HPO) plan to obligate the power distribution companies to purchase power from hydro power plants. Many private players are also actively engaged in the generation and distribution of the power.

In the next 10 years, the power sector will have a fabulous growth, says Jayaprakash Gandhi, Career Consultant and Analyst. To cope with the changing demands, the State Electricity Boards are engaged in structuring themselves efficiently.