About Nirma University 2013 : Institute of Technology is a leading institute offering multi disciplinary postgraduate & undergraduate programmes in engineering. The institute was affiliated to Gujarat University till April 2003. Thereafter, it has become a constituent of the Nirma University. 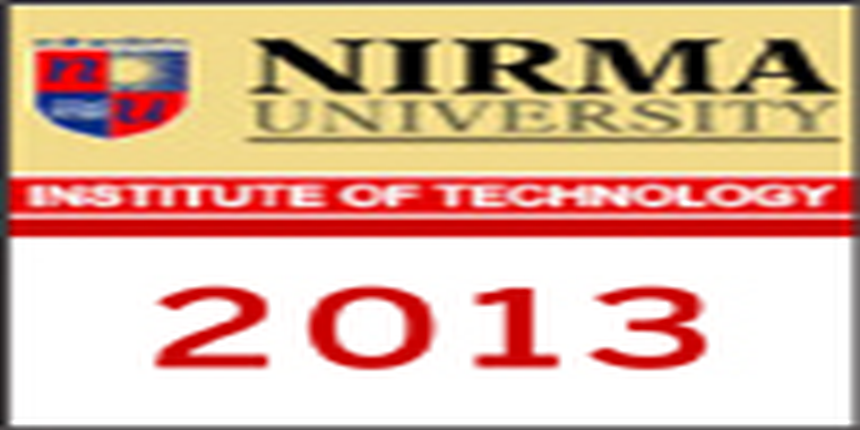 There are two modes of application.

Nirma University 2013 Online application: The online application form is available on the website www.nirmauni.ac.in from tentatively from fourth week of April, 2013 to Second week of June, 2013 (Exact Date will be announced later).

The entries made by the candidate cannot be altered once the form is printed. Paste the recent colour photograph on the printed application form, sign across it, sign the declaration on the form, attach self attested documents as mentioned in application form and send it to Admission Officer, UG  Admissions 2012, PG Building, Institute of Technology, Nirma University, Sarkhej – Gandhinagar Highway, Tragad Patia,  P.O. Chandlodia, Ahmedabad – 382 481.  In case of payment by Demand Draft, the demand draft of Rs. 1200/- shall be drawn in the favour of “Institute  of Technology, Nirma University” payable at Ahmedabad is to be sent alongwith the application form.

Nirma University 2013 Offline application: The Prospectus and the information brochure for the admission to B.Tech. Degree programme - 2013 can be obtained from the Admission Office in PG Building of the Institute of Technology, Nirma University and also from all branches of The Kalupur Commercial Co-operative Bank in Gujarat State on payment of Rs.1200/- from Fourth week of April 2013 to Second week of June, 2012. The forms can be obtained on all working days (except Saturday) from 11:00 AM to 3:00 pm and on Saturday between 11:00 AM to 1:00 PM.

Application fee can be paid via: Demand Draft or Online mode of payment.

Your Nirma University B.Tech Admission brochure has been successfully mailed to your registered email id .