The function began with the inauguration of Dr. M S Ramaiah Center for Research and Development (Industry Collaborations) by Dr. Pallam Raju and accompanied by Sri Deshpande.

The unveiling the statue of late Sri Dr. M S Ramaiah was officially done by Sri Siddaramaiah. The valedictory function then began with an introduction that described about the various aspects and the legacies that the institution has left in these Golden 50 years.

The welcome speech was delivered by Dr. M R Jayaram. He began with a story that commemorated the achievements, the tough times and the series of events from 1962 to till date, which were a part of the establishment of this great institution. In his speech the chairman recollected the philanthropic gestures of his father late Sri Dr. M S Ramaiah and his contribution to Mankind. The main highlight of his speech included the coveted reward of achieving a University status for the Group of M S Ramaiah Institutions, which is known as “M S Ramaiah University of Applied Sciences”. The Chairman also put forth his vision of the institution in the next coming decade as “Jnana, Vignana Bhakthi Sahitha”, where he meant imparting Knowledge and Education along with greater focus on good Morals and Spiritual Thoughts, which would lead the student into a brighter future.

The chairman also made a mention about the aid the Institute has given to the victims of the unfortunate tragedy that occurred at Uttarakhand. An amount of Rs 1, 00, 00, 000 has been collected for the purpose from the staff and management of M S Ramaiah Institutions. He then concluded his speech by welcoming all the dignitaries and felicitated them with a memento as a token of appreciation for their presence.

Later Dr. Pallam Raju presided over the function. He began his speech by highlighting the achievements of the true karma yogi Sri Dr. M.S Ramaiah. He stressed the need to have a moral value system to be imparted on to the current generation and to focus on quality technical education. This would lead to achieving self sufficiency and to reduce the brain drain the country is facing in recent times.

Sri Siddaramaiah recounted the contributions made by the great visionary Sri Dr. M S Ramaiah. He spoke about the numerous achievements made by the college in these 50 years in Education and Service to the society. He wished the institution to carry forward its achievements for the rest of the time to come, so that it celebrates its Platinum Jubilee with the same sprit.

A Souvenir and a Research Journal of M S Ramaiah Institute of Technology was released by Sri R V Deshpande. He addressed the gathering and also recollected the tremendous contributions of late Sri. Dr. M S Ramaiah. He stressed the need to have quality in technical education and emphasized the need for culmination of Industrial Training with High Quality Technical Education. In his speech he motivated the students to make use of enormous opportunities that are available in the present Hi Tech days; grab them and make India a Super Power Nation. The main highlight of his speech was to request and persuade the HRD minister, Govt of India to help in establishing an IIT in Karnataka. He then urged the need to have a larger reach of Technical Education in this state.

Finally the Vote of Thanks was delivered by Sri M R Seetharam. He thanked the dignitaries for their presence and gracing the occasion inspite of their busy schedule. The ceremony was then concluded by a salute to the national Anthem. 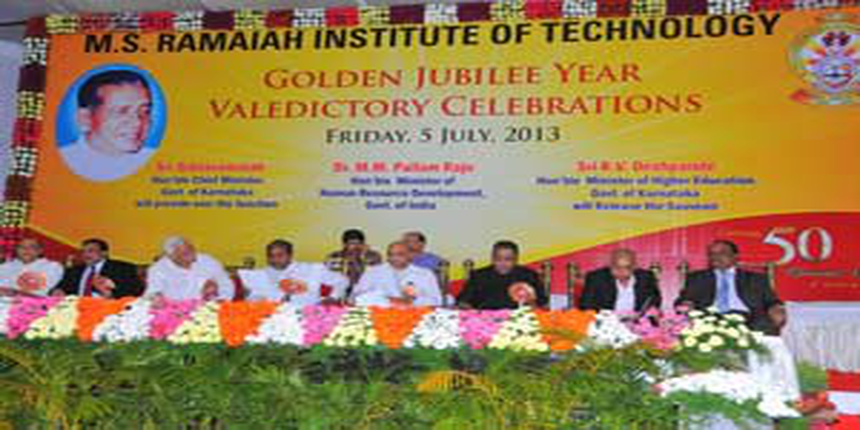 Interesting facts on M.S. RAMAIAH Institute Of Technology- The...

YOU HAVEN'T SPECIFIED YOUR COLLEGE

Is MSRUAS worth it over MSRIT banglore??

MSRIT is the old instituted and you can say it is the most reputed one, while MSRUAS is the newly opened institution.

Also, MSRIT is affiliated to VTU and is autonomous while MSRUAS is not.

So, I would suggest that MSRIT is better when compared to MSRUAS.

Hello , I am studying in last year of diploma in Maharashtra . Can I get admission in MSRIT ? What is the Procedure ? Can you please explain me....

Yes , they do offer lateral entry for diploma students you need to write DECT conducted by KEA. Now coming to eligibility other state students can write the exam but you need to get very decent rank since the reservation for other states are very less.You need a very high rank in DECT. Most of the seats are reserved for the state domicile students .

one for more thing that I suggest you as a friend , It's better you talk directly to admissions section and get your doubts cleared. Don't take any help from middlemen .

The fee structure is MS RAMAIAH college for BTECH engineering in the fields of mechanical, civil, CSE, EXTC and IT the fees for the full course will be INR 3.47 lakhs. The engineering fees throigh CET students is lesser than compared to the students entering through COMEDK.

The approximate fee per annum for MBBS course at M.S. Ramaiah Medical College is in the range of 5,75,000 - 7,00,000 including the fee for hostel facility.

What score should be sufficient in comedk uget 2020 to get CSE branch in msrit?

Hello there,
To get admission in MSRIT in CSE branch, you have to rank within 1000. For that, you need to score 130+ marks out of 180, in COMEDK 2020. It's not so difficult if you are well prepared. You may get CSE at 120 marks as well, but it is not sure, as the "marks vs rank" changes every year depending on the difficulty of the paper. So, to be on the safe side, you should score 130+ marks.
Hope this answer helps you.
Good luck!!
Read More
Answer

Life at VIT- Experience it with VIT Student Siddharth Gumber

Life at BITS Pilani- Experience it with Sagar Arora

Your Ramaiah Institute of Technology, Bangalore brochure has been successfully mailed to your registered email id .