KEAM 2018 Topper Interview: Denin Jose (Rank 3) - “Find a good mentor, back it up with hard work to achieve success” 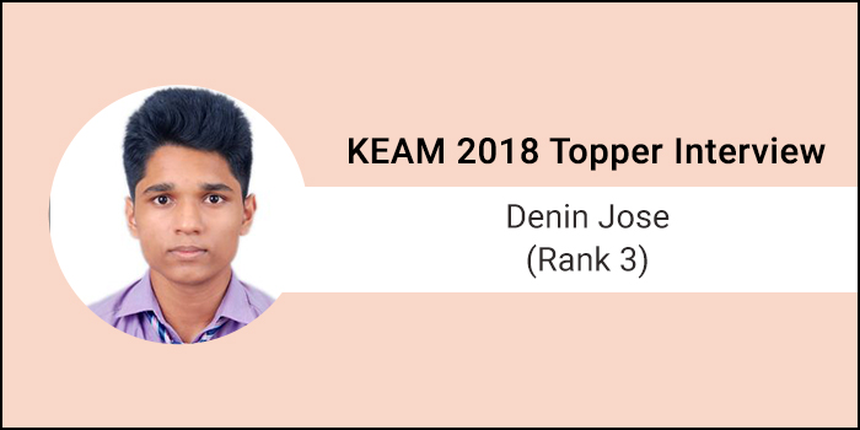 KEAM 2018 Topper Interview: Denin Jose (Rank 3) - Think of a scenario where you have appeared in an exam but downplay your chances, as you are too modest and believe there are more qualified candidates than you. But then the unexpected happens and you find yourself sitting on the podium on result day. It is exactly what happened with Denin Jose, who has clinched the 3rd rank in KEAM 2018. When contacted, he said that he could hardly believe his good fortune as he was not among the star contenders in his coaching institute, which according to his own admission had many. Quick to thank his coaching institute, who he believes was instrumental in his success, he urged candidates to stay motivated and work hard if they wished to achieve success in KEAM.

Latest: [Want to Know Colleges, Specialization to Apply on the basis of your KEAM Scores, Click here]

Denin informed Careers360 that he plans to take up Engineering Physics, even though it is his second choice, at IIT Madras (the reason is given below). He also shared a great deal about his preparation strategy, why according to him coaching is becoming an integral part, and more in this KEAM 2018 Toppers Interview with Denin Jose.  Keep reading.

Careers360: Congratulations for your outstanding performance in KEAM 2018! What was your reaction upon knowing your rank?

Denin Jose: I was not expecting such a good rank and it came as a sweet surprise. I owe a great deal to my coaching institute Brilliant Pala. My parents were also equally delighted because they too didn’t think I would be ranked this high. The reason being I was not one of the top performers in my coaching institutes; it naturally kept expectations low.

My aspiration from the beginning has been to become an IITian. So, I have appeared in JEE Advanced 2018 as well. My rank in the exam is AIR 1944.

Denin Jose: I did my schooling at Kuriakose Elias English Medium School, Mannanam, which is affiliated to Kerala State Board.

Denin Jose: I haven’t given much thought about it. But my brother is studying to become a doctor and I thought it best to study engineering because I liked Mathematics whereas I was not very fond of Biology.

I am interested in pursuing Mechanical Engineering in IIT Madras, but I don’t think I will have my wish fulfilled because my rank is a bit on the lower side. My second option is Engineering Physics at IIT Madras.

Reasons for my preference of IIT Madras are its proximity to my native place and also because a number of my seniors are already studying there. So, I will not be alone as I will have somebody to look up to.

Careers360: When did you start your KEAM preparation? Tell us something about your preparation strategy and daily routine for KEAM?

Denin Jose: I started my preparations from the 11th standard onwards. Our coaching programme was mainly for JEE Main, JEE Advanced as well as KEAM.

I didn’t stick to any particular preparation technique and depended on my mood. Starting off, I used to study for about 5-6 hours but I started enjoying the preparation process as the exam approached. And with it my study hours also went up a bit.

Initially there was some tension and stress, but I realized that it can only do harm to my preparation and began to relax and chill out. I started blocking negative thoughts and tried to enjoy the whole process.

The coaching institute conducted model exams every week.  These tests gave the impression like I was giving the real exam which helped me to get into the exam mode and also understand the finer points of test giving.

Careers360: Was there a difference in the preparation strategy in the last months of KEAM considering that the board exams also are during this period? How did you manage preparation for both?

Denin Jose: I was focused on the entrance exams from the start, so the board exams were not a distraction. Handling the two was not easy, but neither was it so difficult that it couldn’t be managed.

Once board exams ended in March, I fully dived into entrance preparations.

Careers360: Did you take coaching for KEAM and if yes from where? What are the benefits of coaching according to you?

Denin Jose: Yes, I took coaching at Brilliant Pala. A great deal of credit for my success goes to the institute as I was an average student whom they moulded into a topper
Some of the questions asked in exams like JEE Advanced are so tricky that without coaching it is challenging to understand them in one go, leave alone finding a solution to all of them. Brilliant Pala came to my rescue as they taught me how to manage these types of questions and maximize my scoring opportunities. After all time management is a big part of these exams.

Denin Jose: Yes every week we had two to three model exams at the coaching institute. Solving previous years’ question papers can prepare the candidate for exam situations; learn about question types, difficulty levels. In fact, candidates can expect more or less the same type of questions like those included in previous years’ papers, though the values may be changed or little tweaking may be done to confound the candidate.

Careers360: Did you face any problem during the KEAM examination?  Which subject was the easiest and which was the toughest in KEAM?

Denin Jose: The exam was conducted offline and I faced no problems. Mathematics was the easiest, Chemistry was moderate while Physics was comparatively difficult as questions were lengthy. So in Physics I skipped some questions to attempt them later.

Careers360: What do you think are the key factors behind your stupendous success in KEAM?

Denin Jose: As I already told you my coaching institute Brilliant Pala is a big reason for my success. Apart from tha,t the self-motivation I had that I could do it carried me on. Also, I worked hard, stayed in the present, and tried to enjoy the process.

Careers360:  How did you de-stress yourself during the preparation? What are your hobbies? How often could you pursue them?

Denin Jose: Yes I used to watch movies every now and then and also listened to music at times. I also exercised for couple of hours whenever I could find time. There are no short-cuts to success, just hard work.

Denin Jose:  I don’t have any idea as such. I used to read books by Richard Hyman. I also find A.P.A. Kalam’s words highly motivating.

Careers360: You know you are an inspiration to thousands of students across the country. Do you have any message for future aspirants on tackling the KEAM exam?

Denin Jose: Getting coaching is necessary for success in top entrance exams like JEE Main, JEE Advanced and even KEAM. Candidates must follow the instructions of the mentors diligently. Also, keep motivating yourself and work hard.

KEAM Result 2020 - The authorities will announce the result of KEAM 2020 tentatively in the third...

KEAM Counselling 2020 - Candidates who will be participating in KEAM 2020 counselling can refer t...

KEAM Cutoff 2020 - The minimum ranks that a candidate is required to secure in order to have hig...

can i get admission for bpharm by appearing for keam?


Yes, you need to write paper 1 of KEAM (physics and chemistry), to get admission in BPharm courses in Kerala.

KEAM Eligibility Criteria The CEE set the parameters for candidates who can or can not apply for the state level examination. KEAM 2020 Eligibility conditions are set on the basis of age, academics, nationality and nativity criteria. For this year, Paper 1 and Paper 2 are scheduled on April 20 21, 2019 respectively.

The minimum academic qualification required to appear for KEAM 2020 is passing or appearing in Class XII or Higher Secondary examination. Only Indian Nationals can apply for KEAM. However, OCI (Overseas Citizens of India) and PIO (Persons of Indian Origin) candidates will also be considered Indian citizens and can apply.

KEAM is a single tier entrance exam conducted in Kerala for admission to Architecture, Engineering and Medical courses. The candidates can also seek admission to allied courses like B.Sc. (Hons.), Veterinary and Fishery. Candidates must fill KEAM Application form or required entrance form according to the course they choose to apply. Given below is the list of courses offered through KEAM 2020:


Hope this helps! All The Best!!

Feel free to ask if you have any more queries

Yamuna, the application form for KEAM 2020 is scheduled to release in the first week of February 2020 in online mode and can be filled till the first week of March tentatively. The admit card would be released by the second week of April and the pen paper based test would be conducted on 20 and 21 April 2020.

For more updates, expected schedule and details on how to fill application form, please visit: https://engineering.careers360.com/articles/keam-application-form/amp

can we get seat in government colleges through keam

how to submit application to CEE

Dear Nevin,
I would like to tell you the steps required to submit your application of CEE 2020
Step 1- Registration
Step 2- Filling Application Form
Step 3- Uploading Scanned Images of Photograph and Signature
Step 4- Payment of Application Fees
Step 5- Final submission of application form

I have already applied for neat 2020,intended only for medicine now is it essential to appear or register for keam 2020


I hope this helps

View All Questions
Have a question related to KEAM ?