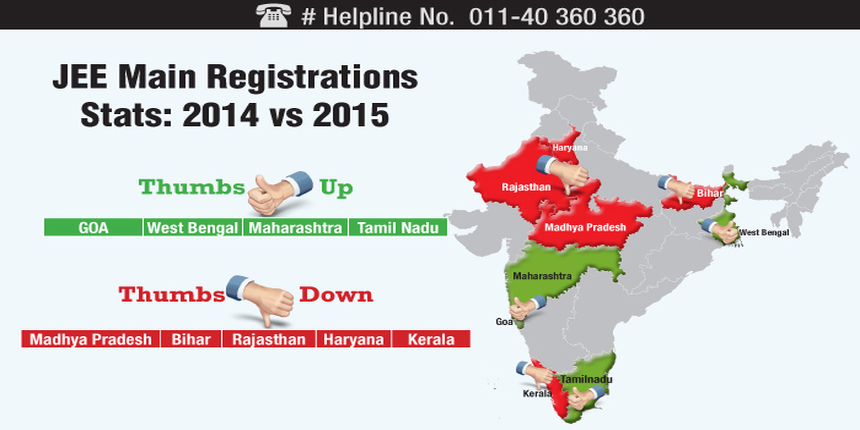 JEE Main 2015
has witnessed a reduction of over 50,000 registrations as compared to the year 2014. JEE Main Exam is the first screening test for admissions to the prestigious IITs and this year, as many as 13.04 lakh students have applied for JEE Main 2015. Last year, the total number of JEE Main registrations was 13.56 lakhs. While the states like Madhya Pradesh, Bihar, Rajasthan, Haryana and Kerala witnessed a significant decline in JEE Main 2015 registrations, the number of applicants from states like Goa, West Bengal, Maharashtra and Tamil Nadu increased in comparison with the year 2014.

Careers360 brings here “JEE Main Registrations Statistics: 2014 vs 2015” that comprises of a comparative analysis of JEE Main Applications on various parameters- total number of registrations, male & female applicants, states with the highest & lowest applicants and much more. Read below to understand the trend in detail.

In comparison with 2014, this year, the number of JEE Main applicants has decreased by 3.8%. As many as 52,311 lesser number of candidates has registered for JEE Main 2015.

States from where JEE Main 2015 Registrations increased (in comparison to 2014):

Top 5 states from where JEE Main 2015 Registrations decreased (comparison with 2014):

The trend above shows that in JEE Main 2015, the interested number of students appearing for this entrance exam is reduced by a significant number, which is more than 50 thousand.The apparent reasons for the reduced number of JEE Main aspirants this year might be decreasing interest of students in engineering education or quality issues of engineering colleges in India that are unable to provide 100% placement to its students. There are many unemployed engineers, who opt for management courses in order to get a good job.

Crack JEE Main 2015: Why Practice of Previous Year Papers is a must?

Stay tuned to engineering.careers360 for more features on JEE Main 2015.

NITs Cutoff for B. Tech Computer Science and Engineering

NITs Cutoff for B.Tech Computer Science and Engineering- Check here the cutoff of NITs for B.Tech...

TIET B.Tech Admissions 2020 will be conducted for allotment into the engineering courses offered ...

I got 89 percentile in JEE MAINS January 2020. I belongs to general category. What college will i get using this mark??

HELLO JEEYANTHI
Congratulations for your result and qualifying JEE mains.since it is very difficult to predict the exact rank but we do have a backup we have a formula to calculate the expected rank that is (100 – Total percentile) x 869010/100.So according to formula your expected rank for present percentile for January session comes out to be 95591. Now the expected rank might change depending on the no of candidates appearing the april session. For ex if 12 lakh candidate appear the april session then just replace 869010 by 12 lakhs. But if you score above 85 percentile then you have a very decent chance of qualifying jee mains.

Now since the official cutoffs  for college are yet to be decided but let us analyse your chances by looking into the previous year cutoffs data
Well since you are from general category getting NIT or IIIT seems a little difficult but you can go for state counselling.No worries since you have an april attempt left and most importantly baap of the exams i,e Advance which may directly lead you into IIts. there are several other reputed colleges like BITS,SRM,VITEEE who conducts their own entrance exam so exam application are out you can fill it and give the maximum no of exams so that you have more options in your hand
i'll give you a link of list of all engineering entrance exam. you will find all the details there!!
https://engineering.careers360.com/exams
But if you are curious to know that which college you might land into with your percentile then you can use the college predictor link which has following features;

what is application fee for jee main april

Here is the details of Application Fees for JEE MAINS Paper of April :

More than One Paper

Yes, we can consider krakex app as a good app for jee main and jee advance preparation as well. It consists these qualities:-

(1) Developed by IIT alumni which is a great thing in this app you will get short tricks and methods which iitian use for jee examination.

(2) It contains previous years question paper with detailed solutions, which is very important for an aspirant to understand about the nature and pattern of the questions asked in previous year.

(3) It is a personalized learning app. But it needs some more qualities like mock tests and others.

Yes, you should apply as a fresh candidate because you have already given the exam and if you will use score of the JEE mains january session then you will have to show the valid document and since you obc ncl certificate was invalid, you must apply as fresh candidate.

I have filled general category in my january jee mains 2020 . Can i change it to General EWS in jee main april. If yes if I get higher marks in January than April then which will be considered?

If you have valid documents to prove that you belong to EWS category, you can change your Category to EWS for JEE Mains April application.

EWS reservation is for Candidates who belong to General Category and whose annual income from all sources is less than 8 lakhs. If you fulfil the criteria you can apply under the General EWS category.

The better of the two scores is considered. So , if you get higher marks in the January paper then, that is the one that will be considered.