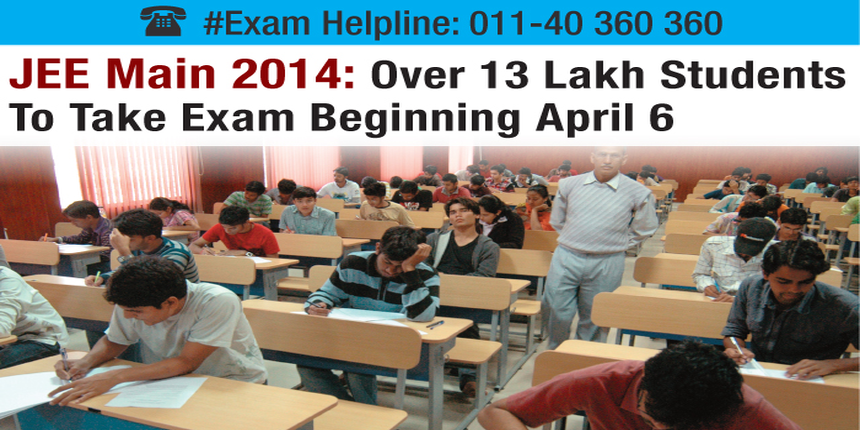 For engineering aspirants throughout the country, JEE Main 2014  exam beginning on April 6 will define their dream career ahead. This year, over 13 lakh candidates are scheduled to appear for one of the most competitive exams in the country and compete for engineering seats at different NITs and Centrally funded institutes in the country. Last year, top 1.5 lakh candidates in JEE Main 2013 were passed to appear in JEE Advanced 2013-The Gateway examination to IITs and ISM.

The paper pencil based JEE-Main will be conducted on April 6, followed by online testing on 9, 11, 12 and 19 in the month of April.

According to CBSE, the top three states with maximum number of applications are Maharashtra, Uttar Pradesh and Andhra Pradesh. Leading the chart of highest number of candidates is Maharashtra where 2,45,582 applicants have registered for JEE Main 2014. Uttar Pradesh and Andhra Pradesh are on the second and third place with 1,58,451 and 1,22,863 registered candidates respectively.

Your choice: Offline or Online?

According to the Central Board of Secondary Education, which conducts the Joint Entrance Examination, the JEE (Main) 2014 in Pen and Paper mode will be conducted at different centres located in 150 cities throughout the country and abroad on 6th  April, 2014 (Sunday).

The conducting body of JEE Main- CBSE has prepared different sets of question papers, which will be used on the different dates of examination. According to a CBSE official, “The entire syllabus of Mathematics, Physics and Chemistry has been covered in each question set by dividing the syllabus of each subject into appropriate number of units and choosing equal number of questions from each unit.” The officials added that each set of question paper will carry same percentage of easy, medium and difficult questions.

“In every set, each subject carries the same percentage of easy, medium and difficult questions. This ensures the same difficulty level of each set of question paper for this year 2014 also, as per practice of the Board in the year 2012 & 2013,” the official said.

Duration for JEE main will be three hours without any break. JEE Main 2014 will have two separate papers- B.E/B.Tech and B. Arch/ B. Planning- each of 3 hours. Paper 1 will be based on syllabus from Physics, Chemistry and Maths, whereas Paper 2 will comprise of 3 parts- Mathematics, Aptitude test and Drawing test.

From this year, there are 4 new states that will be providing admissions to their engineering collges via JEE Main 2014 scores. These are-

However, from the last year, there were some states that started admissions to engineering colleges through JEE Main. Gujarat was the first of them. Others include-

The JEE Main 2014 Result is expected to be announced on May 3, 2014. Only after clearing JEE Main 2014, candidates will be eligible to apply for JEE Advanced 2014, which is compulsory to get admissions to different IITs’ scheduled to be held on May 25, 2014. The JEE (Main) will also be the eligibility test for the JEE (Advanced), which the candidate has to take if he/she is aspiring for admission to the undergraduate programmes offered by the IITs/ ISM Dhanbad, in which the total number of seats are  9867*.

According to CBSE notification, the States engineering colleges in the states of Gujarat, Maharashtra and Odisha will also make admission based on JEE (Main) scores.

JoSAA 2020 counselling will be conducted in June. Registration and choice filling will start in J...

DAIICT B.Tech Counselling 2020 - Candidates will have to participate in the counselling of DAIICT...

I got 93 percentile in JEE Main 2020. I belong to SC category. Which are the top NITs that I can get for CSE branch?

You have scored 93 percentile in JEE main that means your rank should be around 60830. However your final rank will depend on number of student appear in April month exam. You can also calculate your rank as

Your category rank will be around 2k-3k. You should mention your home state for better information. You can predict your college here

I got 72.9 percentile in jee main and I m general can I get good government colleges????

You have scored 72.9 percentile in JEE main that means your rank should be 235501. You can also calculate your rank

With this rank you have low chance to get any government college. You should reappear in april month exam and perform better.

mam how I will get a good rank in jee main . to complete my ncert and ncert textbook level question only .

If you have read ncert well then you can score good marks as it is analysed that most of questions in Jee exam are occurred from NCERT .But the thing is that to crack those questions you should have in depth knowledge of Ncert it means you have read line to line of ncert.After reading or completing ncert you must solve practice questions from a Good book .So for that you can prefer Universal Self Scorer.

All the very best

Total no of students in particular shift cannot be predicted but official data from national testing agency stated that There were 869010 students were apperared in January session .
So There were total of 869010 students apperared in Jee January session .So you can calculate your rank By the formula No of Candidates apperared in exam /100 *(100- Nta score ).
But if the no of Candidates in April session changes to 12 lakh then your rank will change accordingly.
Thanks
All the very best
Read More
Answer
Answer Later
Report
11 Views

I got 84.6159619 percentile in jee mains.Im belongs to OBC category which collage is preferable to me..

You need to do more hard work in upcoming attempt of jee mains to get a nit or iiit .

All the very best