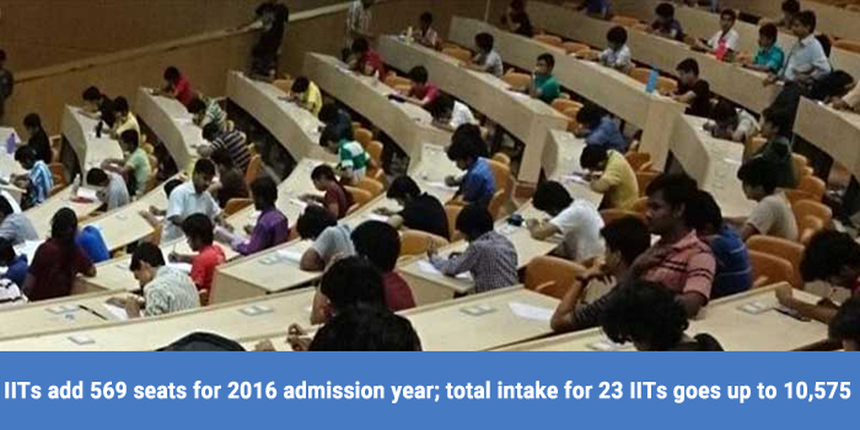 With 4 new Indian Institutes of Technology (IITs) participating in JEE Advanced this year, the total number of seats at the premier league of engineering institutions has gone up by 569 for admission year 2016. With the new additions in the elite club from this year, seat intake at these institutes of national importance has gone up to a total of 10,575 from the existing 10,006 seats. The four new IITs that are participating in JoSAA 2016 include - IIT Chhattisgarh, IIT Goa, IIT Jammu and IIT Karnataka.

According to the official data of JEE Advanced 2016, a total of 23 IITs, including ISM Dhanbad will offer admissions to undergraduate engineering programmes at 569 more seats from the academic year 2016-17 onwards. Out of these 569 seats, 420 seats will be offered by the 4 new IITs, while the remaining seats will be offered by some of the existing IITs, which have added a few more undergraduate engineering seats this year.

As per the IIT officials, this year, IIT Dharwad (Karnataka) and IIT Bhilai (Chhatisgarh) will commence classes with 120 B. Tech seats each, while IIT Jammu and IIT Goa will begin the session with 90 seats each. For seat intake at these 4 IITs, see the table below.

Careers360 brings you status of total number of seats offered by different IITs as per the latest official data as on June 12, 2016.

In 2015, a total of 19 IITs and ISM Dhanbad offered admissions to 10,006 undergraduate engineering seats, whereas this year the total seat intake across 23 IITs and ISM Dhanbad will be 10,575. Admissions to these many B.Tech seats will be offered through counselling and seat allotment conducted by Joint Seat Allocation Authority 2016 or JoSAA. JoSAA is a joint counselling process for admissions into IITs, NITs, IIITs and GFTIs. The body was formed in 2015 comprising representatives from Central Seat Allocation Board (CSAB) and Joint Admission Board (JAB) with a view to reduce the number of seats going vacant at the prestigious engineering institutes.

Stay tuned to engineering.careers360 for more news and updates on IITs.

Jee Advanced is a consequential exam if a candidate clears JEE Mains. The registrations for the same will be happening in the month of May. This exam is used to test students who wish to do Bachelors in Engineering or Technology. It even involves courses which have integrated Masters, and Dual Degrees. This the second stage and therefore the students who qualify JEE Mains are able to give it. It is conducted by 7 IITs. This time the conducting body is IIT Delhi. It is a 3 hour paper which is computer based and it is conducted in both Hindi and English languages. It is your ticket for admission into 23 IITs making it one of the most desiring exams to take and pass when it comes to aspiring engineering candidates. The official website is https://jeeadv.ac.in


Here is how to prepare:

For this go through the previous year question papers and mock tests and plan your time-table according to strengths and weaknesses in the various subjects. Make a combination of relaxation and preparation. Solve question papers to track your progress.https://engineering.careers360.com/articles/jee-advanced-mock-test https://engineering.careers360.com/articles/jee-advanced-question-papers

For mathematics, go the old-fashioned way. You can try shortcuts for certain things but practice, Practice and practice. Memorise tables, square roots, cube roots, conversion from percent to fraction, etc. Reducing time for this section is important.

Assess through your JEE Main score. Check where you lost marks and what were your strong points. Make a list where you can divide topics according to their strengths and weaknesses.

Devote maximum time to your studies.

If you have amazing scores in your Mains, you can go for books like Irodov.

Create a strategy to be able to write a 6 hour exam.

Try to understand the problem give in the exam well. Be sure of what the question means before answering.

Other than that, eat well and take care of your health. Know that you can ace it and if you have the right preparation, you surely will.

Hope this helps. All the best!

Hey there hope you're doing well
Dear aspirant, congratulation on scoring a good percentile in the JEE MAIN examination. According to your percentile score in JEE MAIN your expected rank is about 30,415. With this rank you're likely to get into NITs. But it's good as you want to improve in your percentile and rank. As far as preparation is concerned since you have secured a decent rank in JEE MAIN a little effort would take you under 10k rank. For JEE ADVANCED you need to focus on analytical questions; problems that require in depth knowledge of subject matter. Joiningof coaching benefits you as they create a good competitive environment. Give full length test series a d practise more no. Of questions. Also absolve previous year JEE MAIN + ADVANCED problems.
Thank you hope this helps you!
Read More
Answer
Answer Later
Report
21 Views

Hello.
It is quite difficult to tell you the latest cutoff percentile to be qualified JEE mains for JEE advanced but yes by analysing the previous year records I can tell you that how much percentile probably you basically need to have, So for general category you need to have at least 85 percentile.
And remember the above percentile is on the basis of previous year record it may fluctuate with some factors.
Best of luck.
Read More
Answer
Answer Later
Report
15 Views