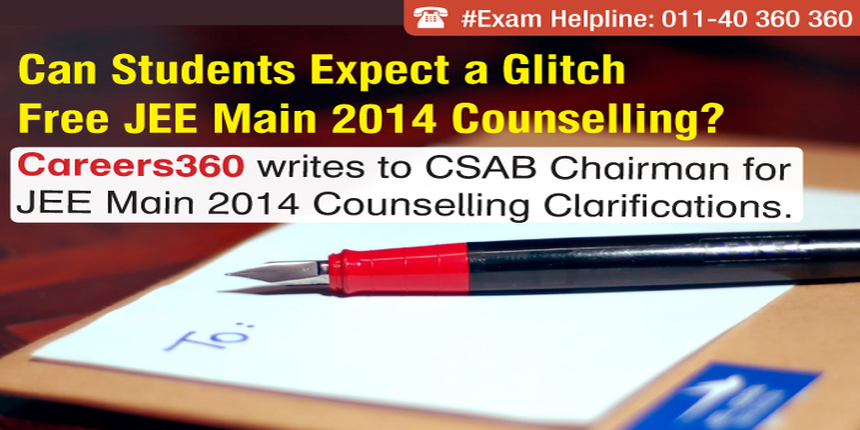 Careers360 had earlier spoken to CSAB 2013 Chairman Prof Sunil. Kr. Sarangi regarding the various controversies that had mired the CSAB as well as the JEE Main 2013 Counselling. Click here to read.

Taking cue from the discussion which revealed a lot of interesting facts about the CSAB, Careers360 is writing an open letter to MNIT Jaipur Director, also the CSAB 2014 Chairman regarding the issues that plagued the JEE Main 2013 Counselling with an expectation that they have been taken care of and that students can expect a glitch free counselling for JEE Main 2014.

CSAB 2013 saw major changes in its implementation strategies as well as controversies in the allotments. There were serious flaws in the system due to which   lot of students suffered and in general were dissatisfied with the  Counselling conducted for JEE Main 2013. We at Careers360 would like to know if the legitimate concerns of JEE aspirants, parents etc with regard to the Counselling Procedure would be addressed at least during CSAB 2014 for JEE Main 2014. We have put together the concerns here and hope you would be kind enough to respond to them so that all the stakeholders could at least look forward to a hassle free counselling process.

Q1:  Expectations are high considering that MNIT has successfully been handling the CCMT – the Common Counselling for M.Tech courses for GATE qualified students. But the number of students who will take part in the Counselling are extremely high in the case of JEE Main 2014 comparatively. Can students expect error free Counselling process from the CSAB?

Q2. Who will be handling the website work? CSAB 2013 was handled badly by CDAC with basic errors even in state codes that should not have happened apart from other errors. What can students expect from CSAB 2014 considering that MNIT Jaipur has now ample time to set these issues right?

Q3 The normalization process is still very much unclear to many students. Is CSAB going to handle the normalization calculations for JEE Main 2014? If yes, can students expect a clear transparent process on the same? What will be the changes expected in the technology that will be used to incorporate it into the system?

Q4. Global sliding was used by CSAB in 2013. Will the same process be followed in 2014? Considering that there are different institutes with various categories, branches of study, can you give us a brief up of how the counselling is proposed to be done in 2014?

Q6. NITs and IITs had a common admission agreement where data about students already admitted would be available between the two. It was one of the well thought plans to avoid vacancies but was withdrawn in the last minute. Can we expect a common single window counselling for the two in 2014? If yes, how will it be implemented?

Q8. Refund was a major issue at the end of the JEE Main 2013 Counselling. While NIT Rourkela had to face a host of problems like limited clearance handling by the bank there, wrong account numbers given by students and online system failure, how is MNIT Jaipur going to ensure that these problems don’t occur?

We at Careers360 hope that the CSAB Chairman will answer the questions raised to put the fears of students to rest. Careers360 hopes that CSAB will ensure glitch free JEE Main 2014 Counselling for all the students who will have qualified and applied for the admissions to the NITs, CFTIS and SFTIs.

4. Directors of all the IITs

5. Directors of all the NITs

TIET B.Tech Admissions 2020 will be conducted for allotment into the engineering courses offered ...

Let me first calculate your rank

It can done on the formula

So, it seems you have low chances.  You need to improve your rank. All the best

For detail on other college check this https://engineering.careers360.com/articles/jee-main-cutoff-for-b-arch-b-planning


There is nothing separate or specific that you need to do for studying aeronautical engineering after 12th.You need to study your class 11th and 12th subject very well mainly Physics,chemistry and Maths and then you can apply for various entrance exams conducted for admission in colleges offering aeronautical engineering.The syllabus of the exams will be based on what you will study in class 11th and 12th.
you can check syllabus of jee mains from the link below :

I hope this helps.

After complition of 12th exam, what entrance exam like JEE or IIT is do for aeronautical engineering admission?

JEE  is an exam for admission into IIT NIT and other government funded Institute for engineering in India. Almost all of the Government colleges in India get admission through JEE exam but exam itself conducted in two phases number one is mains and number 2 is advanced.

You have to score a minimum marks more than your cut off to be eligible for JEE advanced. This is score you have to get in JEE main exam. You can get admission into aeronautical engineering from any of the exam however if you specifically want admission in IIT then you have to clear main cutoff and also get a good rank in JEE advanced exam.

You can read all about JEE below:-

The exact prediction would be difficult about your admission possibilities. But as per the previous year cutoff, the chances are less to get a seat in NITs, IIITs & GFTIs, You can try for state level counseling.

To know your admission possibilities in state level counseling, you can use JEE Main college predictor tool.

To prepare for JEE main April exam unit 2 first show all the previous years questions because they are crucial for getting a good score also appear for as much as mock test possible so that it can give you the real sense of the exam also you can analyse all the way to the areas and work upon them to improve the score efficiently.

While appearing for the test you need to be very serious because and less you are serious you will not be able to get the proper feedback and also work upon the feedback to improve your score further.