With computer science engineering increasingly becoming a popular choice, one question that comes up in the minds of students is – which specialization to take to build a good career? While Artificial Intelligence, Machine Learning are some popular choices, blockchain is one such technology that has huge potential. Dr. Shashidhara Assistant Professor, School of Engineering and Applied Sciences, Bennett University elaborates on why block chains are the revolution and expected to power the future. 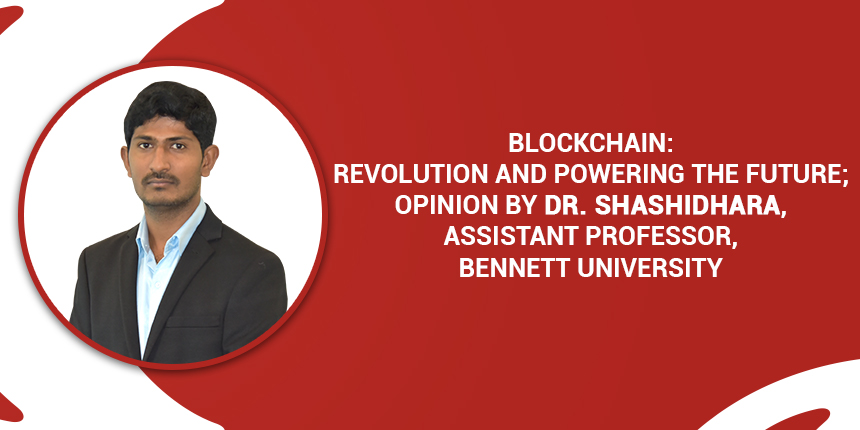 What are Blockchains and Distributed Ledger Technologies (DLT)?

Blockchains and Distributed Ledger Technologies (DLT) are fast-evolving technologies with huge potential to disrupt many sectors across the business, government and society. The concept of a blockchain was first introduced as the technical backbone of the digital currency Bitcoin but is fast evolving into mainstream applications far beyond its initial purpose. Today, blockchain technology is showing great potential to disrupt industries including supply chain, finance, healthcare sector, asset ownership, identity management and many more.

What is the need for Blockchains?

Blockchain talent and capabilities, for foundational platform programming and blockchain application development, are extremely scarce across the globe due to technology nascency and a low number of live engagements. According to NASSCOM Blockchain report, only one out of every 400 software developers in India can work on blockchain, which could potentially be the backbone of many large financial transactions in the country. Therefore, the demand for people with Blockchain skills is high. Indian start-ups have not been able to tap into the global investment surge in blockchain, cornering only about 0.2% of the investments. There is an urgent need for a conducive regulatory and government procurement policy environment to accelerate start-up growth in India.

Students of Bennett University participated at the boot camp o...

Bennett University has started the application process for B.T...

Bennett University has commenced the application process for B...

How many Percentage is needed in 10+2 for getting admission in Bennett university (BA LLB).

To get Admission in Benett University , as per eligibility criteria to be eligible you need at least 60 % in your class 12 board examination or equivalent.

While the selection for Admission is through 3 modes:-

For detailed information visit its Official page , the link is provided below

what is the date of Bennett university exam(BA LLB)

So for admission to Bennett University you must look upto preparing for CLAT or LSAT and check their dates or you can even take admission on the basis of your 12th marks. For detailed information regarding admission procedure follow the link; Bennett University (https://www.bennett.edu.in/wp-content/uploads/2019/12/Admission-Procedure-BA-BBA-LLB_2020.pdf)

is bennet university will be good for journalism

The course is directly guided by The Times Group. They get the Times benefit.Most of the faculty is from there and thus are well versed with what goes inside the newsroom. Almost 60% of our course is based on practical work, and theory only takes the rest 40.

Well, Bennett University is one of the best choices for a career in mass communication and journalism. The exposure given to the students is truly amazing. They help you to develop the skills required in the various mediums. The teaching pattern is quite different from other colleges; the ratio of practical and theoretical is 70% - 30% respectively. Total fees is 9.6 lakh for 3 years.

Is there any scholarship in Bennett University offered to Meritoris student so that their fees can offset by their scholarship?

We are in one of the top institutions, We offers very good scholarship to the deserving students, All the details are given on college website. We have the option for 100% scholarship based on your JEE Main rank & your 10+2 score so if you refer the website there are four different type of scholarship so it starts from 100% then 50% & there are other two levels depending where you stand academically Either your JEE main rank & your 10+2 score so you will get the scholarship.

How does an Internship structure flow in Bennett University ?

After third year there is mandatory scholarship of 8 weeks then in last semester there is a mandatory project semester of one semester that means of 16 weeks so apart from that many students even do internship after first year & second year but that is optional. Many students are excited that they don't want to loose their time & energy.

Some of the students in Bennett university even doing four internship in the time of four years so that's how it is structured so Mandatory is only two internship one is 8 weeks & one is 16 weeks.

Your Bennett University, Greater Noida brochure has been successfully mailed to your registered email id .